Fighting the Freshman 15: How to Follow Paleo in College

Think back to your college days. What did you eat? Ramen, frozen pizza, and cereal straight from the box? If you were to name the five foods you ate most in school, would any of them be Paleo? I adopted the Paleo lifestyle when I was out of school, living on my own, and had a fully equipped kitchen. Had I still been in school, eating in campus dining halls, my Paleo experience would have been very different. But Shelby Amling, a senior marketing and communications major from University of Denver in Colorado, not only proved that following Paleo in college is possible, but challenged her school to join with her. Keep reading for tips on how to stay healthy while in school – and how to follow Paleo on a college budget. Thanks for sharing your story Shelby! -Kara

Why did you organize a Paleo challenge at your school?

I’ve been Paleo for about two years. Personally, I’ve found that if I have a support group, I do better. I’ve always been the go-to girl on fitness and nutrition at my sorority, so I organized a “Hotober” challenge last year. I found that many people had NO experience watching what they ate, so the idea of cutting out whole food groups was very intimidating. Basically, I ended up teaching them the basis of Paleo. This year, I brought it back as more of a challenge. 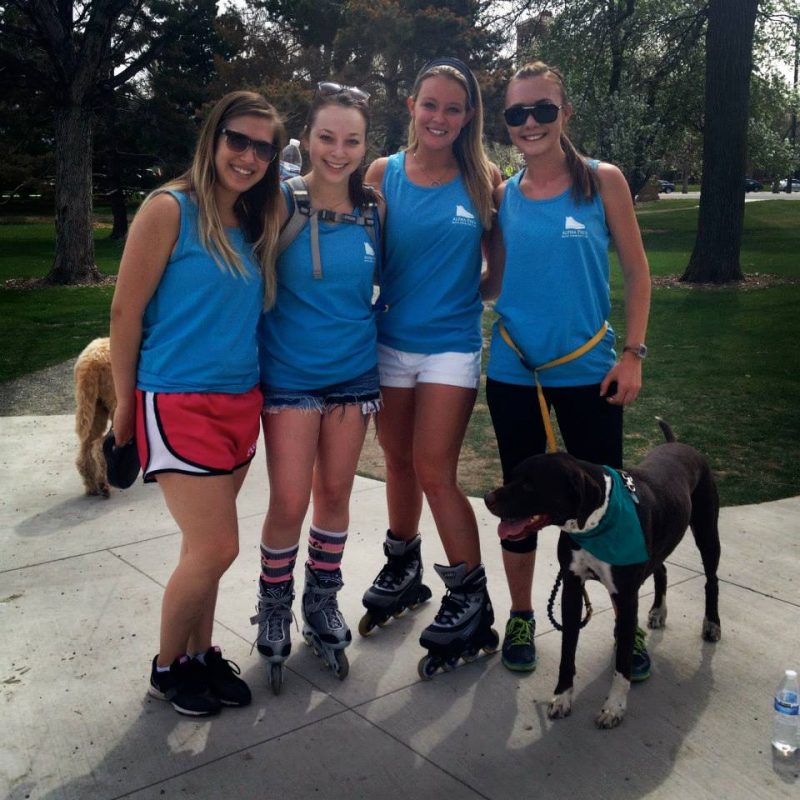 What were the parameters of your challenge?

The original parameters basically followed the Whole30. No grains were allowed – including corn and quinoa. Sugar (in any form) and dairy were out, they were supposed to drink a lot of water, get eight hours of sleep…and no alcohol.

No alcohol?! How did that go over?

Not ONE person gave it up. They went, “We’re in college! You can’t expect us to give up alcohol!!” I gave them a cheat sheet of Paleo-approved alcohol. A few followed the cheat sheet, a few cut back a little, and a few stopped adding so much soda to their drinks. I’m not a fan of alcohol, so that’s easy for me. I’ve been a pretty big fan of tequila since going Paleo, but have never missed beer or whiskey.

Ok – besides the alcohol, how did the 2nd Paleo challenge go?

This year we had 36 participants, and the first week went really well. There were a lot of girls who stuck with it…aside from drinking. I gave everyone a Week 1 Meal Plan to follow. They were also given “templates” on how to build meals around meat, vegetables, and fat. After Week 1 I started hearing comments surrounding lack of time or kitchen space. I wanted to show them how easy it can be to follow, so I started using social media to share what I was eating. I posted pictures on Instagram (follow @seashelbee) of meals that took all of five minutes to throw together. 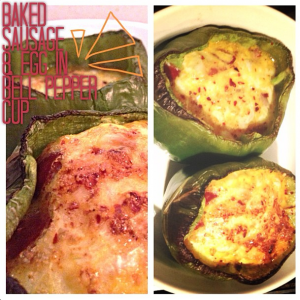 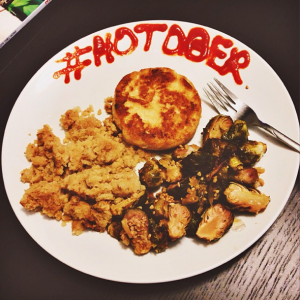 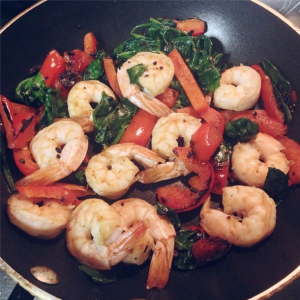 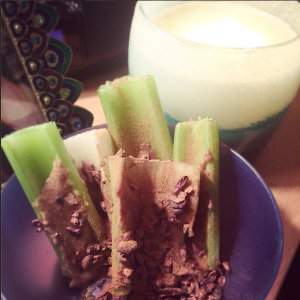 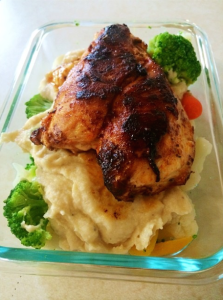 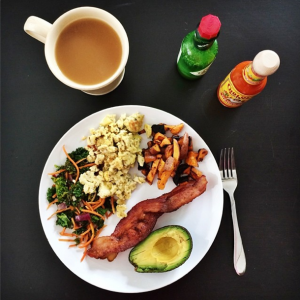 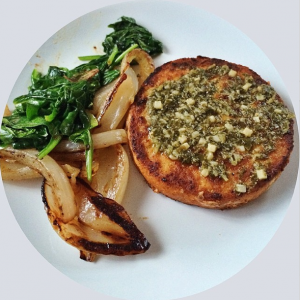 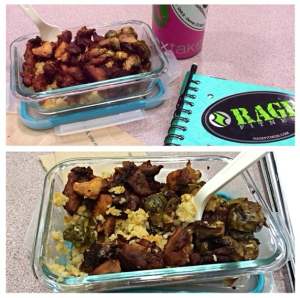 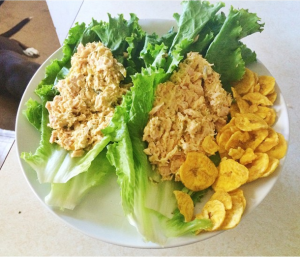 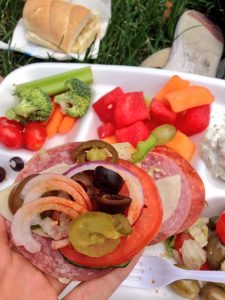 By Weeks 3-4, girls were really starting to get into it – to the point of being competitive. I originally based the challenge on a points system. Points weren’t awarded for weightloss; but rather for exercising, posting photos of meals, drinking water, and getting eight hours of sleep. Points were deducted for cheating. However, a lot of body-image issues started appearing, and I scrapped the points. I was afraid some unhealthy things would start happening, so I told the girls it was ok to cheat once in awhile. Eventually I chose the “winners” on participation: those who posted pictures of meals on social media, posted recipes, and generally got others excited about it.

Let’s talk about your personal journey with Paleo. How’d you find it in the first place?

I found CrossFit and Paleo at roughly the same time. Everyone at my gym is Paleo, and my mom started doing Paleo and completed a Whole30 challenge. I saw a dramatic change in her, so I tried it myself. I started off just trying to go gluten-free. I was a vegetarian for twelve years, literally from age 8 to 20. For the first eight months of Paleo, I stayed a vegetarian. That was really, really tough. 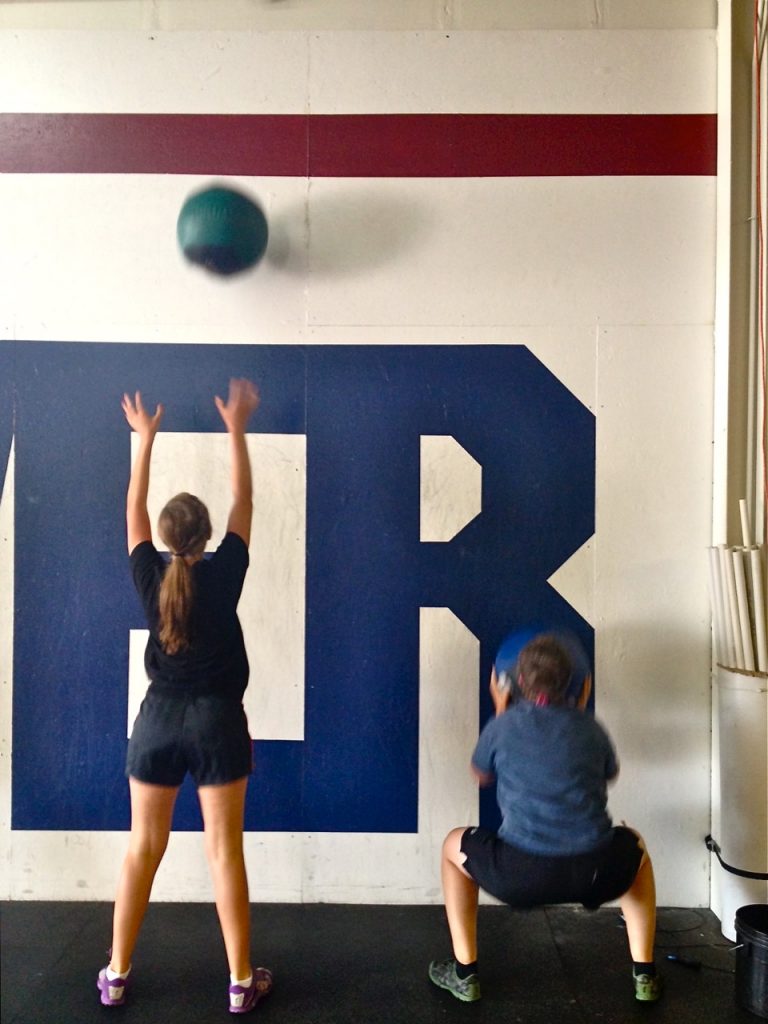 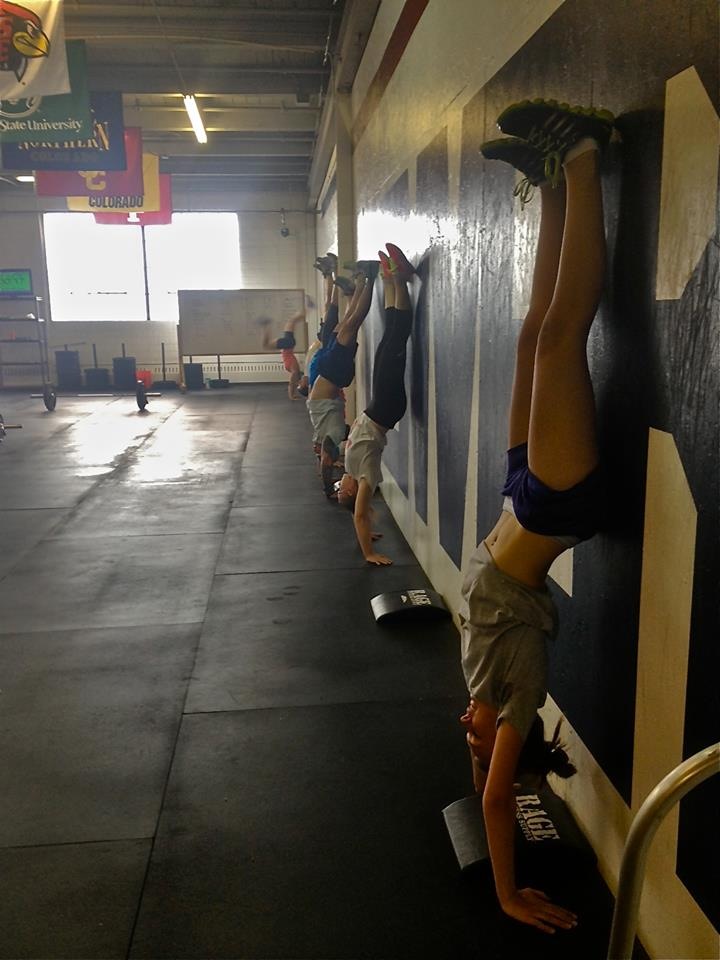 I lost 10 pounds in the first three months, which I didn’t think was possible. I’m a model, so I’ve always had to keep my weight in check. Then I did a 9-week Paleo challenge at my gym, and I actually gained 15 pounds. I was eating spoonfuls of almond butter and handfuls of nuts as my mains source of protein. Finally, I read the book, “The Paleo Coach,” and it finally clicked that I needed to start eating meat. Bacon was the first meat I ate in twelve years, and I could feel my body go, “Hallelujah!” After I re-introduced meat into my diet, I did my first Whole30. 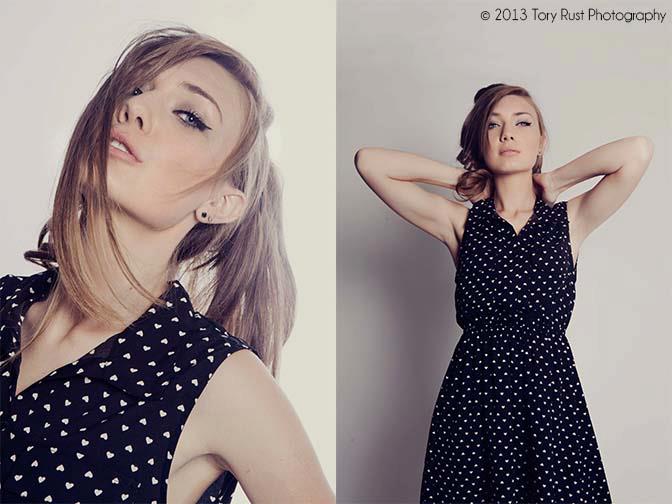 I was a superrrrrr picky eater, and just hated the taste and texture of meat. I couldn’t even choke down chicken without drenching it in ranch dressing. Then one year at Thanksgiving my uncle passed on the turkey, saying he was a vegetarian and therefore didn’t eat meat. All I could think was, “You can DO that???” From that point on, I was still a picky eater, but had a new name for it: vegetarianism. Clearly my taste buds have changed in 12 years and now it’s no problem. 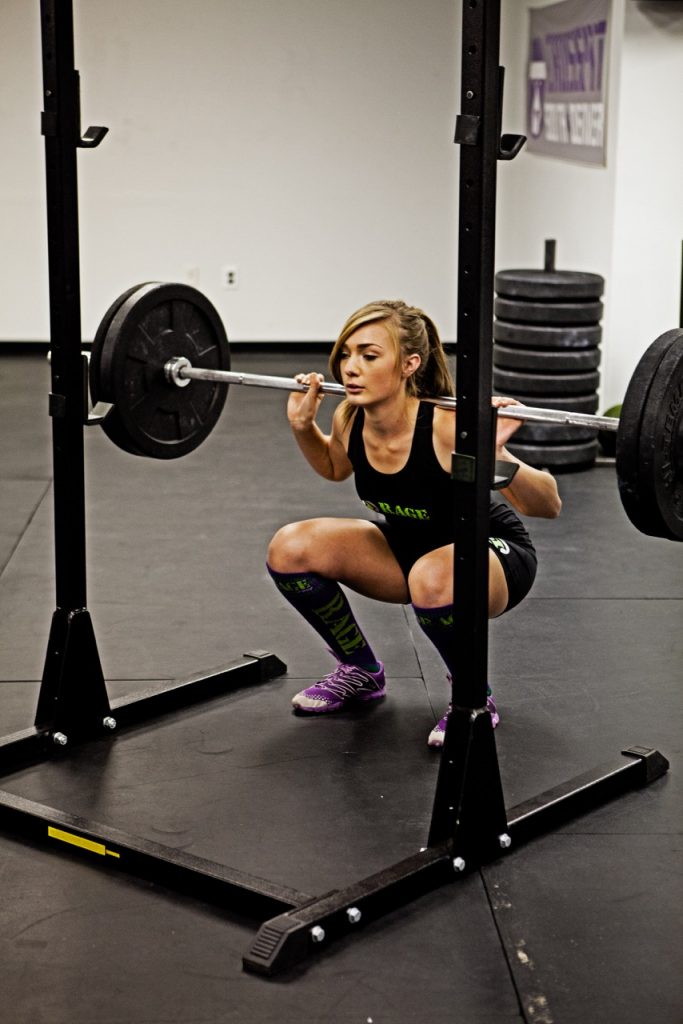 As a college student, do you find Paleo difficult to stick to? What advice do you have for those trying to follow Paleo while eating on campus?

I was living at home for the first few years of college, so I was able to meal prep and cook with my mom. I ate lunch at school, but the cafeterias are completely overpriced. There are restaurants on campus that offer salads, wraps, and other healthy options; so I would buy a salad but bring my own cooked meat with me. Or, I would do a lot of meal prepping. Our sorority is made up of repurposed old dorms, so most everyone involved in the challenge had a kitchen at their disposal. However, I did visit a couple cafeterias around campus during our Hotober challenge. Honestly, they have everything you need to be Paleo, or at least be “carb clean.” They have meat and veggies, and you can use butter as your condiment. I always tell people to walk into the campus dining halls thinking, “I’m only looking for veggies, meat, and fat.” 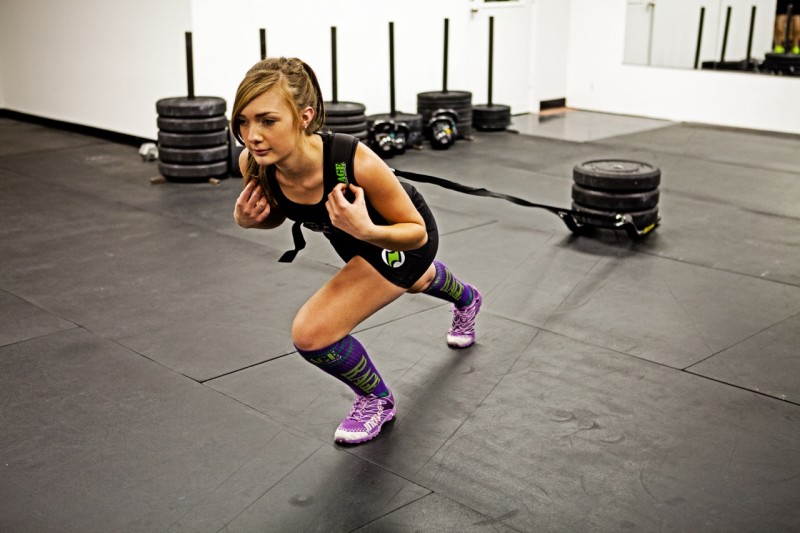 What about upperclassmen? Those individuals may not be eating in campus dining halls anymore, but rarely live on their own. What tips do you have for those living in a shared space – most likely with non-Paleo roommates?

I live with two other girls right now who are not Paleo, so I know how hard it can be. I always tell people to buy items in bulk, but honesty with the three of us we have to FIGHT for freezer space. Things are literally falling out of our freezer! I also have one roommate who bakes banana bread every other week, and I love banana bread. But since my roommates and I don’t share groceries, it’s not too tempting. Then there’s my boyfriend, and he’s the worst –I’ve tried converting him to Paleo for three years! When he’s snacking on something non-Paleo, I usually end up running to Whole Foods and grabbing something from the salad bar to eat. Unfortunately, it can be a waste of money. I always tell people to keep something in the kitchen that they can eat on a moment’s notice. 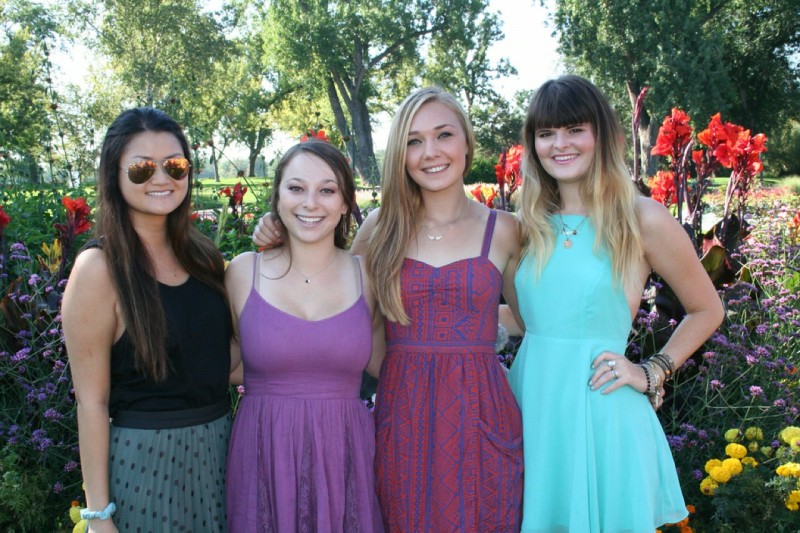 On that note, how are you able to afford Paleo on a college budget?

Buy in bulk – that’s my biggest piece of advice. I go to Costco once a month and drop $50-80 on eggs, bacon, frozen vegetables, meats, and fats/oils. Anytime I need produce I go to Sprouts or Whole Foods. I plan my meals for the entire week, and don’t waste anything. I don’t buy the finest ingredients; everything is gluten-free but not organic or grass-fed. I keep my meals very basic. I would love to cook from cookbooks, but that requires a lot of additional ingredients that don’t align with my budget. When we did our Paleo challenge this October, I actually heard multiple girls saying they were saving money.

These are all great tips! Do you have any final advice – anything we haven’t discussed?

A lot of my “biggest” tips we’ve already touched on, but here’s a recap:

Finally, just listen to your body. It will tell you what it needs. I’m a model who doesn’t count calories. Every girl in my sorority was constantly logging calories in their MyFitnessPal app, and it was a battle convincing them to stop. Everybody is different – I have found that I perform better at the gym if I have a little dairy. I do cheat, probably more than I like to admit. It’s candy every time. The healthy thing to do is just to let those things be ok. 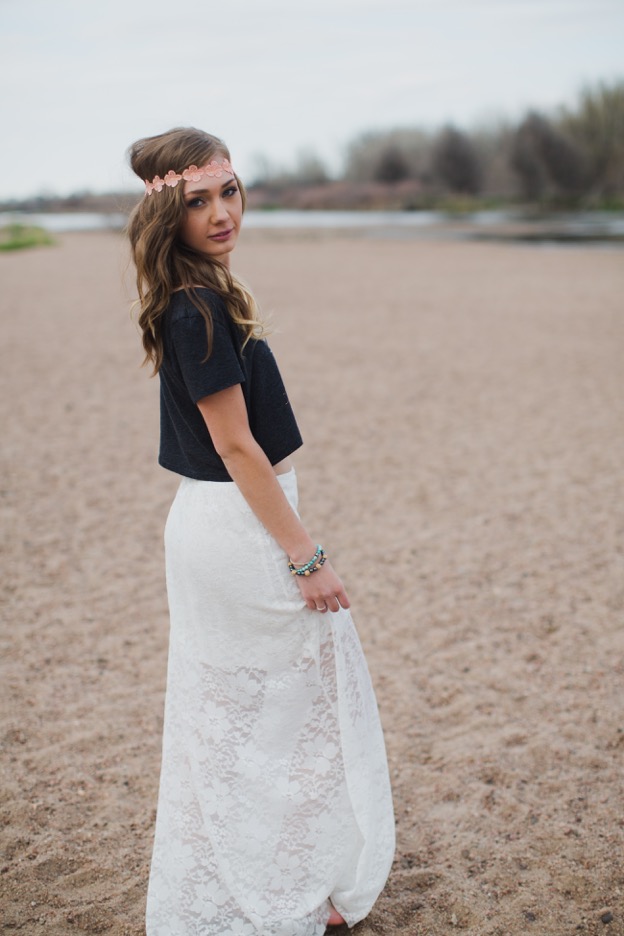 Want to try your own Paleo Challenge? Be sure to grab The 30 Day Guide to Paleo! 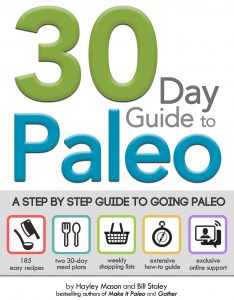 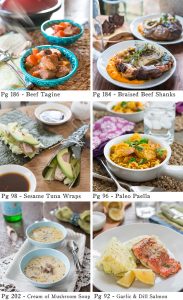 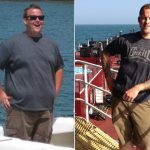 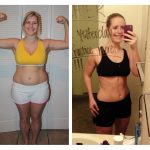 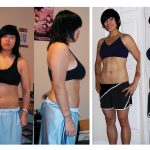 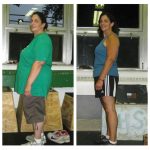