I first found John (i.e. What Would John Mack Eat) on Instagram, and couldn’t have been happier when he uploaded his Paleo recipes to the site. But until I dove into his website, I had no idea he was a Paleo success story. By now, I’ve done a solid handful of success-story style interviews, and have a general transcript I stick to.  But there was one problem.

NONE of my usual questions worked with John. Case in point: Having been overweight his entire life, he probably tried dieting countless times before, right? Wrong. Paleo was the first real diet he had ever been on. Next question. Having lost 100 lbs in just 9 months, he must have been on a serious work-out regimen, right? Wrong. He didn’t work out once. And being a guy who LOVES pizza, beer, and Doritos, he MUST have cheated once in the past two years, right? Once again, WRONG. [Side bar: I pressed this issue. Corn, rice, gluten-free cereal, BEER…nope. The guy hasn’t had ONE.] He also told me something I hadn’t really thought of before: That healthy eating is nothing more than a mental battle. And when we are mentally prepared, and mentally ready, that’s when things will fall into place. To find out more about John, be sure to visit his blog and follow him on Instagram! -Kara 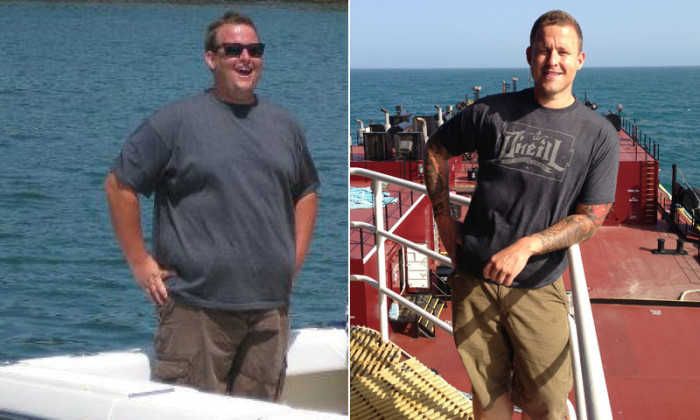 How long have you been Paleo?

In January of 2012 I started Paleo, so it’s been a little over two years now. I work on a tugboat pushing an oil barge on the Mississippi river. We’re part of the U.S. Coast Guard, and I was due for an annual physical in March. I knew that in order to “pass,” I had to lose weight. I lost 40-50 pounds within that three month period. I walked in for my physical and the doctor went, “Do you know you lost 40 lbs?!” I just replied “Oh really?” Of course I knew.

Did your doctor just HATE Paleo?

Oh my god, HATED it! He absolutely hated the idea of Paleo. He kept arguing with me, saying “Oh you need more fiber, you need whole grains.” He still tells me that to this day.

Was weight something you always struggled with?

I’ve been overweight as long as I can remember, but I was always active. I grew up in a close-knit community in Rhode Island. All the kids in my neighborhood were the same age, so we were always playing touch football or basketball at the neighborhood courts. So as far as exercise went, I definitely got it. Food was the problem. I would eat pizza on pizza on pizza. Plus my mom was constantly working, so we would eat whatever we could find. When I went to college it just got worse through eating in the dining halls…and drinking beer.

If you had been overweight your entire life, did it completely blow your mind that it only took 9 months to lose 100 lbs? I mean, had you tried dieting 100 times before?

Did it blow my mind? Yes. Did I ever diet before? No.

I was always the fat funny guy. People loved me. If anyone wanted to go out for dinner or go get drinks, I was in. So social-wise, it just never bothered me that I was overweight.

So what changed? What triggered the change?

Two things. First, I saw a picture of myself that December and thought, “Wow. I have to change that.” Second, I got this e-mail from my friend Ryan. It literally must have taken everything he had to write me that e-mail. One of his friends had read The Primal Blueprint and it changed his life. So Ryan wrote me this two-page e-mail explaining the book and why I should read it.

That did it. I read the book in late December, and on January 1st I completely stopped eating grains, beer and sugar. I voluntarily worked for five weeks straight (usually we’re only on the boat for three weeks at a time) and read every book I could. When I stepped off the boat, people just screamed, “What happened to you!?” I didn’t even realize I looked any different.

I really believe it’s all mental. When I said I’ve never really dieted before, I think I just wasn’t ready. Then when I read The Primal Blueprint, something just clicked. I wasn’t telling myself I wanted to diet. It was more, “This is how I want to live.”

Did you workout while you were losing? Or was it all diet?

Not once. The one time I did Atkins, I went to the gym twice a day, every day. I lost twenty pounds, but I would come home from the gym STARVING. So I put the weight back on. This time, what I wanted more than anything was to learn how to eat healthy. It was 9-10 months before I even stepped foot in a gym.  The last time I was home, I started Crossfit. The first thing someone said to me when I walked in was, “Hey! You want to see me do a muscle up!?” I was just like, “Not really.” I wanted all my energy to go into how to eat healthy.

I read every Paleo book I could in those first five weeks. People knew I was doing Paleo, but I didn’t really feel comfortable talking about it. I ate Paleo, but I didn’t know why I ate Paleo. As weird as that sounds. People were nay-sayers about the diet. They didn’t think it would work, telling me “You need whole grains,” and “When are you going to eat normally again?” Once I crossed the 100 lb barrier is when they started asking for tips. I recommend Primal Blueprint to everyone, since it’s so easy to understand. I also recommend It Starts with Food, The Paleo Solution, Good Calories Bad Calories; and of course I recommend Primal Palate for recipes.

Haha thanks! So, sorry in advance if this is a stupid question, but how do you eat healthy on a tugboat?

So we’re on the tugboat for 21 days. We do a large grocery shop once at the beginning, then again half-way through, and a final stop toward the end. We have a pretty large kitchen, that’s nice. Part of my job is to make one meal for the other seven guys, and I usually make dinner. So basically, the guys have eaten Paleo for two years without even knowing it! One of my co-workers has lost 40 pounds, and now his girlfriend is trying Paleo too. Our captain has lost 30 pounds. It was easy for them.  And since they’re doing Paleo, I can get away with buying almond flour, coconut oil, and almond butter when we go shopping. There’s no way I’d get away with that on another boat. 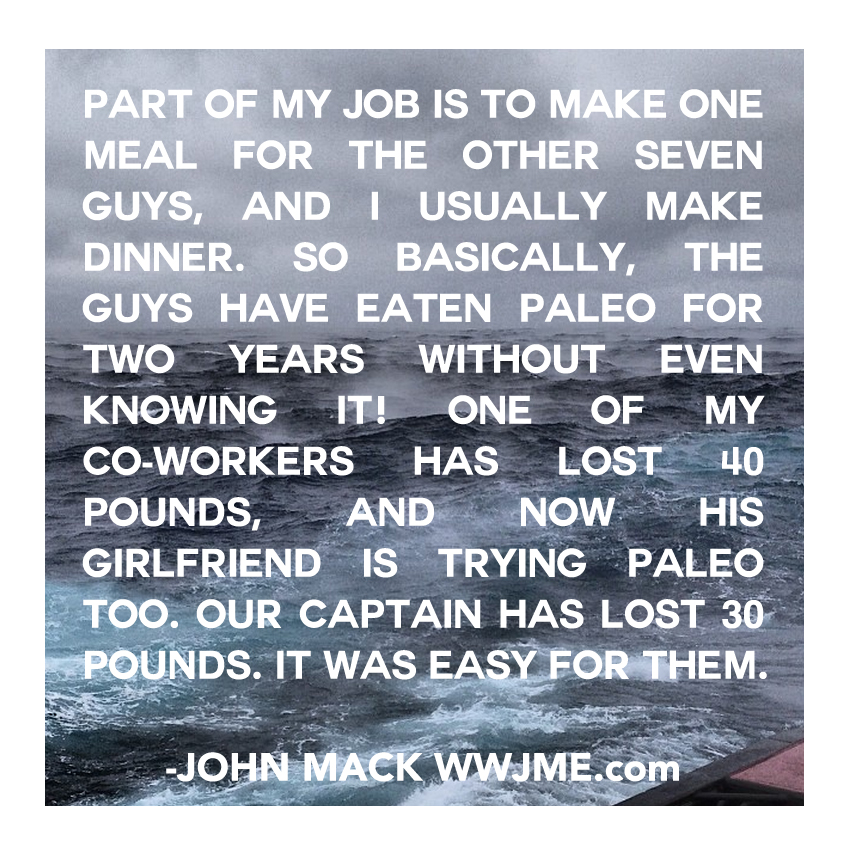 Even when we’re home (we’re on the boat three weeks, and then return home for three weeks) I get texts from the other guys asking me what they can and cannot eat. I’m always happy to answer their questions. My friend who lost 40 pounds is thinking of starting a blog like I have. His girlfriend is getting really into it and loves to Paleo bake.

Ohhhhhhh Paleo treats will get you!

Right? I tell people all the time, “Honestly, I never Paleo bake.” It’s just too easy to go overboard.

So, this is one question I always have to ask. Do you ever cheat?

Want to know something that you’ll probably hate? I haven’t cheated in two years. Corn, rice, you name it; I haven’t had it. I can tolerate dairy so I will have cheese on a salad or in lasagna, but I buy high-quality dairy. I also don’t like “fake dairy” – meaning using cashews or something else in its place. I mean, that’s a LOT of calories! I used to have cream in my coffee, but now I just drink it black. I do have alcohol, because hey, I still like to go out! I stick to vodka, tequila, or red wine; I don’t even do hard cider. I have to say the one thing I really miss is good beer. Or pizza. And I refuse to do cauliflower pizza.

What about on the boat? What do you typically cook for your co-workers?

These guys are from the South, and they want everything fried. What they don’t know is, I don’t fry anything. I’ll do a honey dijon salmon crusted with walnuts. I also make a mean meatloaf, stuffed pork loins with spinach and bacon, and I will still make rice or potatoes for the guys.  You can see everything I make on Instagram.

I’ll typically make 5-6 lbs of protein for seven guys, and they’ll eat any leftovers for lunch. We have a budget we need to stick to, so we shop at Sams Club. It’s the only way we can make it work.  We buy a lot of frozen vegetables to make supplies last between grocery trips. I always poke holes in bags of romaine lettuce or spinach to make it last longer. If you keep it sealed, it will rot from the inside out. The same goes for bell peppers or English cucumbers. To keep herbs fresh, I store them in a glass of water in the refrigerator. Parsley will keep fresh three weeks if stored that way.

Yea! I love food, and always get tips from the Cooking Channel or the Food Network. Alton Brown is my go-to guy. If you have a bunt pan lying around, you can roast a chicken on top of it and it will turn out just like a rotisserie chicken. You can also roast vegetables in the circles of the bunt pan. Another trick is how to remove the skin of garlic cloves. You place the cloves between two metal bowls, twist, and the skin will come right off. Also, simple things like meal prepping will save you. Set aside Sunday or Saturday night to prep your meals for the week. And learn to love leftovers.

What about tips for those just starting Paleo? Any last words for them?

For those just starting Paleo, I have three tips:

1) Don’t buy nuts. When I first started Paleo, I was eating a lot of almonds. Now, I don’t keep them in the house. I know I don’t have the self control.

2) The same goes for fruit. I know it’s natural sugar, but it’s still going to stall your progress. I actually did stop eating fruit for awhile for that very reason.

3) Rethink breakfast. You don’t need to eat eggs if you’re sick of them. Eat leftovers, or whatever sounds good to you. I sometimes do a shake with whey protein in the morning. Or skip breakfast all together.

Basically, you just need to stick to what works for you. I used to love junk food – Nacho Cheese Doritos used to be my favorite thing in the world. When I went Paleo, Taco Bell introduced a Nacho Cheese Burrito. I truly think that was a test from God. But if I can do it, you can do it. You just have to have the right state of mind.

Thanks for sharing your story with us John! You can follow John on his site, What Would John Mack Eat, and also find him on Facebook and Instagram.

Do you have a great Paleo success story you’d like to share? Email Kara at [email protected]!