Jen Robins is a dear friend in my life, even though I haven’t had the privilege of meeting her in person yet. I would have met her at Paleo Fx, had we attended this past April, but for now I just enjoy our long distance relationship. I’m sure when I do meet her in real life one day, it will be a slightly awkward blind date type moment, like when you date someone online and finally meet the person. Hopefully she isn’t “catfishing” me… 🙂

Jen has been through the wringer with her health, and as soon as things started going in a downward spiral with my health, she was one of the first people to reach out to me, offering whatever support she could give. This being from a mother of 3 young children, working her tail off to create amazing recipes for the Paleo community, who still has her own health to think of. I’m constantly amazed at her strength, and compassion for others. There are not many people like Jen in this world, and I feel very luck to have her on my team, and I hope the feelings are mutual! -Hayley

You all probably know Jennifer Robins of Predominantly Paleo for her eBook, The Yiddish Kitchen, which she co-authored with Simone Miller. Or, you know Jennifer for her incredible recipes (ummm bagels, hello): 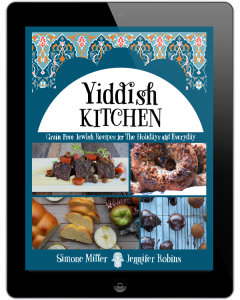 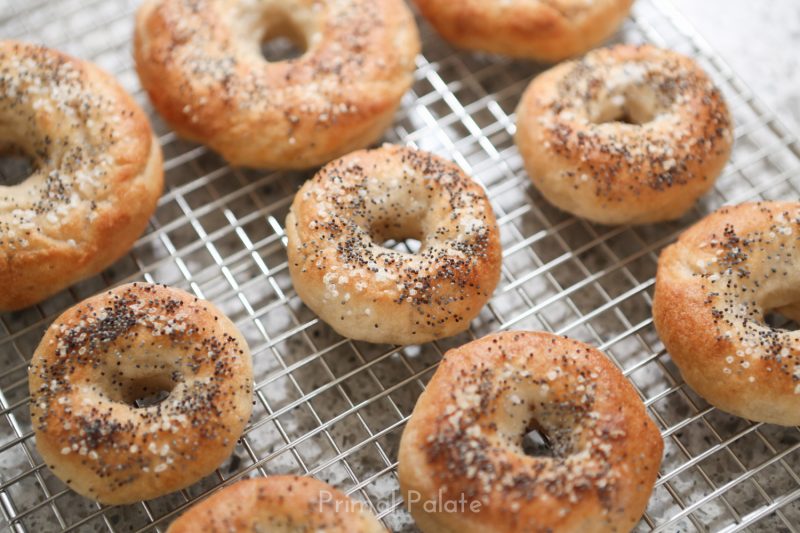 *For those of you who clicked that recipe and were incredibly disappointed the eBook is no longer on sale, have no fear! Yiddish Kitchen will re-release as a print cookbook in 2016.

Jennifer Robins is an incredible mom, blogger, and soon-to-be-published author of two Paleo cookbooks. She is also one of the most hilarious, resilient people I have ever had the pleasure of speaking to. For someone who went from being a young, healthy individual, to someone who was given twenty different diagnoses, she has one heck of an attitude. I didn’t know it was possible to laugh while discussing Hashimotos, Lyme Disease, and a host of other illnesses; but Jennifer making fun of her “hippie ways” and saying she “didn’t give a poo” what people thought of her, was enough to get me going.

Someone once told me, “If you don’t laugh, you’ll cry,” and that’s clearly something Jennifer lives by. Keep reading for how she healed her body with food, how she raises three children on a gluten-free/dairy-free diet, and for her news on her upcoming book! 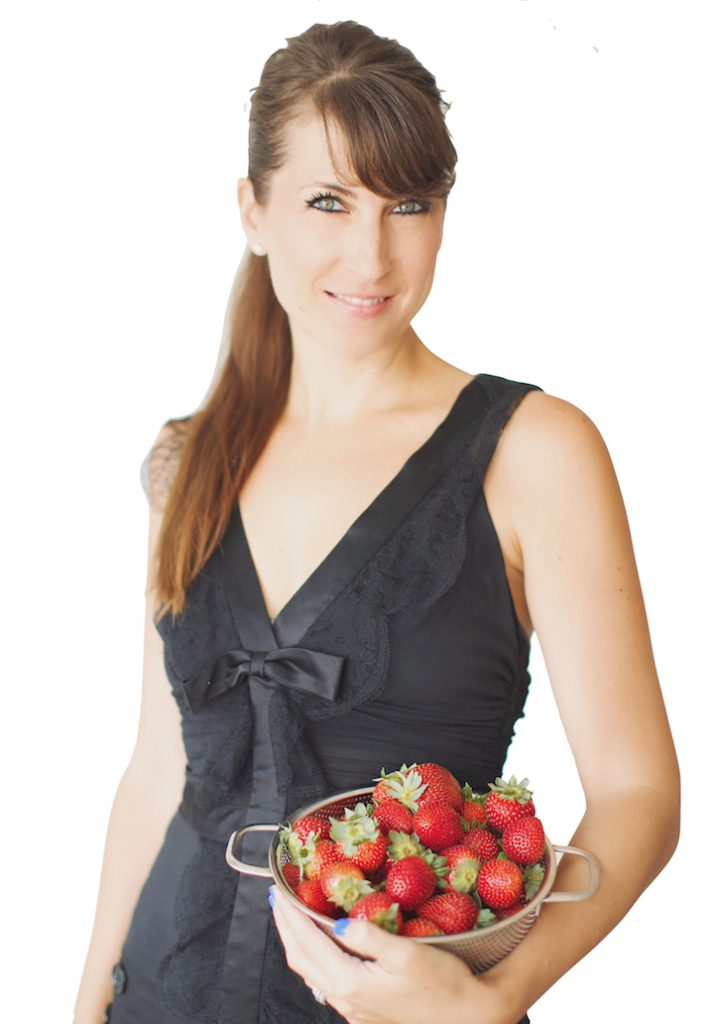 Had you been sick your whole life, or were you a relatively healthy child?

I was always healthy. I can remember getting perfect attendance every year as a child. If I was sick, it was few and far between.

It wasn’t until my twenties that I noticed a change. I was working a very fast-paced job and met the man who would be my husband. There was a lot of excitement, but it was a good excitement. When we started talking about our wedding, he got orders to move overseas as part of the active Air Force. I had never lived outside the state of Texas, so moving was a ton of stress. I started having anxiety and panic attacks out of nowhere.

Eventually the attacks subsided, but I never felt “well.” I had two babies back-to-back, and never felt great while pregnant. When our babies were 5 and 17 months old, my husband was ready to deploy. I woke up every morning as if I had not slept at all. I woke up totally fatigued and irritable, having heart palpitations and feeling dizzy. I went to the doctor, and was diagnosed with Hashimoto’s.

What steps did you take after your diagnosis?

For the next year I researched, and found a link between gluten and thyroid antibodies. I avoided gluten, but wasn’t eating a nutrient-dense diet at all. I was avoiding what I shouldn’t eat, but not necessarily including what I should eat.

With the help of medication, my thyroid levels improved. Then we moved (again), I had two children under the age of three, and I got pregnant — again. 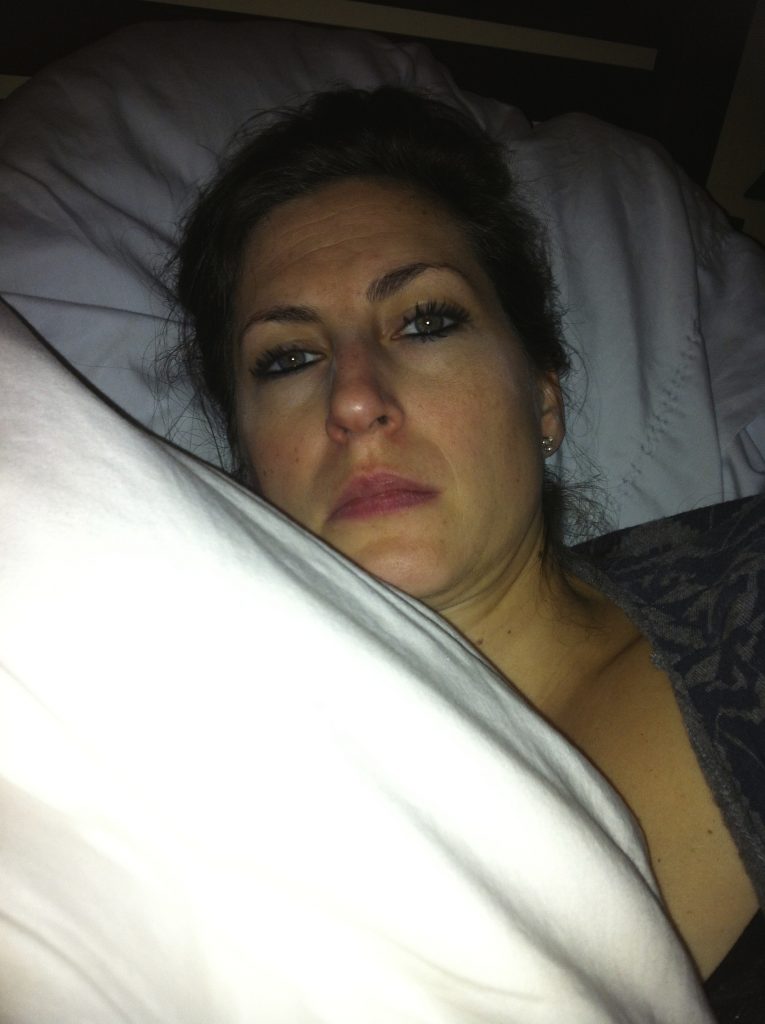 For some people, everything comes in stride. For me, everything is a big event. I’m intense that way. I can see how my own inability to deal with major life stressors has harmed me. My third pregnancy was not bad, but when my daughter was about 5 months old, I got really sick. I had brain inflammation, vertigo, brain swelling, migraines; symptoms you could barely describe in words. I was still gluten-free, but I knew something was terribly wrong. I went to a bunch of doctors, and was diagnosed with 20 different things: nutritional deficiencies, leaky gut, a load of viruses, lyme; it was all over the place. I took over 5 different high-dose antibiotics at one time, and it did nothing for me. I just got sicker.

After 13 months of basically poisoning my body, I said “I’m not doing this anymore. I’m making more toxicity than I am able to get rid of.” I started eating more Paleo and finally gave up dairy. This was a huge piece for me – I didn’t want to admit dairy was a problem. I’m still a work in progress, but over the past few years I’ve gotten my life back.

Did you ever wonder how or why you went from being a healthy individual to someone who was battling twenty different diagnoses?

I think there are some people who have genes that get turned on or off. You may have a genetic background that sets you up for failure, but you never fail. Some people can eat garbage their whole life, but they don’t get sickly like a chronic fatigue patient. My body had had the last straw. It basically said, “Ok, you have eaten garbage, not gotten enough sleep, you haven’t managed your stress; and now it’s all over.”

I think gut health is huge. That’s number one: you have to heal the gut. I have readers who write in who have a child diagnosed with autism, and the diagnosis has basically been removed. I know this is controversial, but this is what I’ve seen.

My warning sign came when I was super stressed over moving to Germany. I didn’t know anything about the gut-brain connection, and I was eating crap. I was so nauseated over panic I was down to 105 pounds. If something sounded good, I would just eat it. I was damaging an already damaged body.

What foods did you eat growing up? Was it strange switching to a holistic lifestyle?

I grew up in a standard American household. We weren’t terrible: we didn’t eat much fast food, but we didn’t eat all organic either. We went to a standard pediatrician. A holistic approach was very natural to me, because the thought of being on medications for the rest of my life terrified me. I think integrative medicine is much more common sense than traditional medicine. Granted I’m not going to rub aloe on my writs if I have a heart attack – if I have a heart attacking I’m going to go to the ER. But if it heals what has been broke, I’m going to try it. Even if it is a little “hippie style.”

A friend referred me to a doctor that did muscle testing. He told me to go on a rotational diet, and to give up gluten and dairy. I didn’t give up dairy, and shame on me because I learned the hard way. I was still eating gluten-free pizza and cookies, and that doesn’t heal bodies, last time I checked. 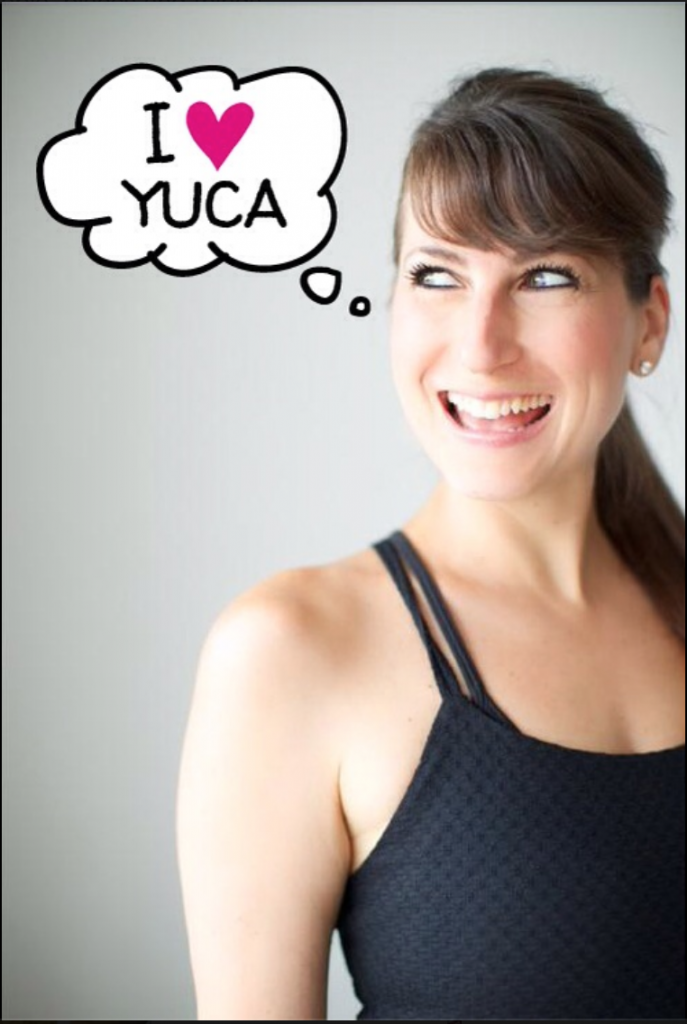 Have you ever “cheated” on Paleo?

I’ve cheated many times. While many people in the community try to set good examples, in a moment of weakness we will indulge. Some days, I would cut off a limb for a gluten-free pizza. Or if we’re on vacation, I’ll have a few bites of my kids’ gelato.

The hardest part is just staying the course. I know I’m not going to have an anaphylactic reaction from eating a corn chip. When those things become daily habits is when problems happen. After I treat myself, I go back to eating how I eat. Some people can get away with 80/20. I’m more, 98/2. This has never been about weight loss. This really is about saving my own life. That keeps me on track most of the time. 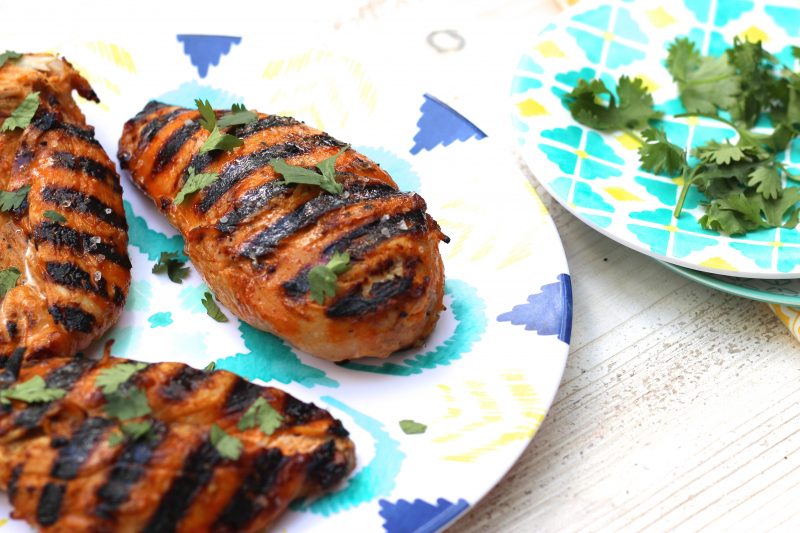 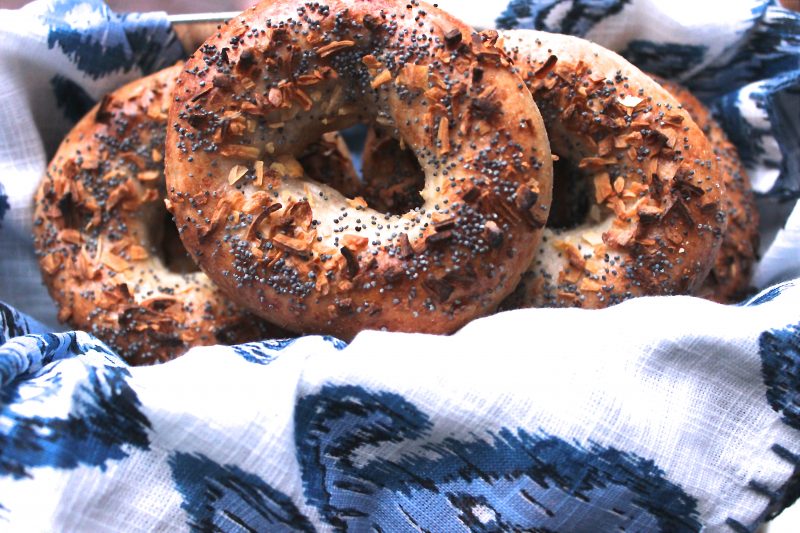 Are you kids gluten-free as well? What have other parents said about your lifestyle and diet?

My kids have all had gluten, and they’ve all had dairy. I took all three kids off gluten at age two. They’ve had goldfish crackers, and other common kid snacks. When they came back positive for antibodies, I took them off. My middle girl was diagnosed with sleep apnea at age five. Who has sleep apnea at age five?? Her tonsils were almost touching, and the doctors said they had to be removed. I thought, “Ok, there is clearly inflammation, and I’m not about to cut out the one thing that’s telling us something is wrong.” I took her off dairy, and within two weeks she slept normally, stopped having mucus, and her tonsils were normal.

I don’t really give a poo what other parents say, and what they think of this “crazy lifestyle.” I have watched two chronic issues be completely resolved. Other parents have said, “Oh, you’re a better parent than I am. My kids love cheese and I just couldn’t do that to them.” I can’t criticize a parent for doing what they believe is right, especially at the advice of a practitioner. At the same time, I am physically showing you this has helped my children. 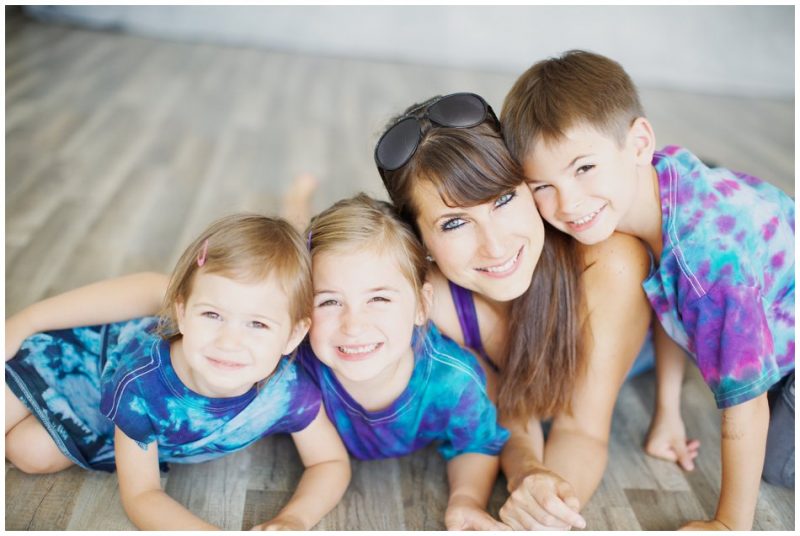 Do you have any kid-friendly snack suggestions? Or tips for raising kids on a Paleo-style diet?

I’ve got several snack recipes on the website. “Lala Truffles” are like homemade Larabars, which my kids love.

The two methods I use are:

Do you have any advice for anyone who may feel deprived on Paleo, or who is left wondering, “What am I supposed to eat??”

First of all, there are so many foods. Unless you have an issue where you react to everything, there are so may foods left beyond dairy, grain, and refined sugar. If you’re worried about timing, use a slow cooker. It’s the best invention in the universe, and can make 4-5 lunches at one time. Salads can also be made ahead of time and stored in glass jars. You just have to put a little forethought into meal prep. When you’re in a pinch, keep your fridge stocked with proteins and veggies and throw ‘em on the grill.

For anyone with chronic illness, be your own advocate and do your own research. This doesn’t mean you won’t need medical intervention, but I don’t think people realize how much power they have in switching to a healthier body. We have to be responsible for that fact. We can’t just blame someone else or look for outside help.

I was almost dying. I knew I was dying, I just didn’t know when. I couldn’t depend on other people or feel sorry for myself; I had to figure out what to do. Some people live in a victimized world, but you just can’t allow yourself to. We have to look inside our own bodies. In a lot of instances, we have all the tools we need in order to heal.

Be sure to pre-order Jennifer’s new book, Down South Paleo, due out in August! The print copy of her incredible eBook, The Yiddish Kitchen, will be published in 2016.

If you loved her bagel recipe, just wait until you try her fried chicken. 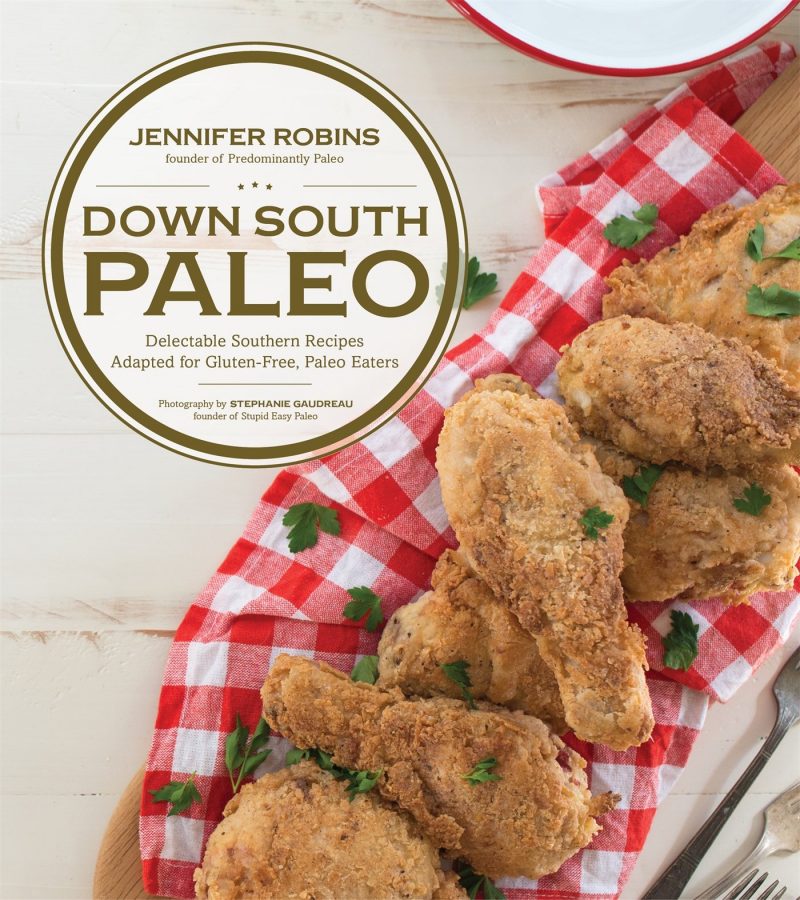 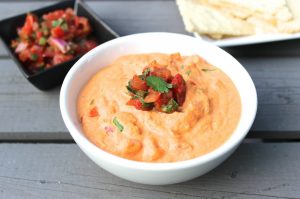 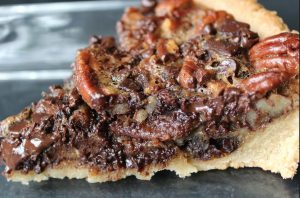 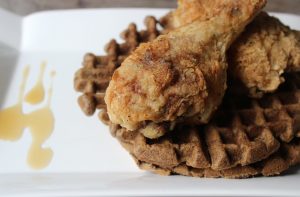 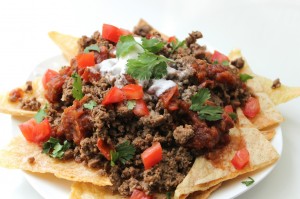