The case for local, raw honey: My tour of Fassbinder Apiaries

“No, not Frieden’s road. It’s the gravel road after Frieden’s. And then you go down a BIG hill, and the driveway is on your right at the bottom. But not the very bottom, if you reach the very bottom you’ve gone too far. And they don’t have a sign or anything, it’s just the driveway. Oh, and you need to wear long socks.”

That  ^^ was how my mom explained how to get to Fassbinder Apiaries to me. Which is essentially how you give all directions in a town of 500 people.  I had known Fassbinders all my life, and had literally never purchased honey from a grocery store until I graduated college. 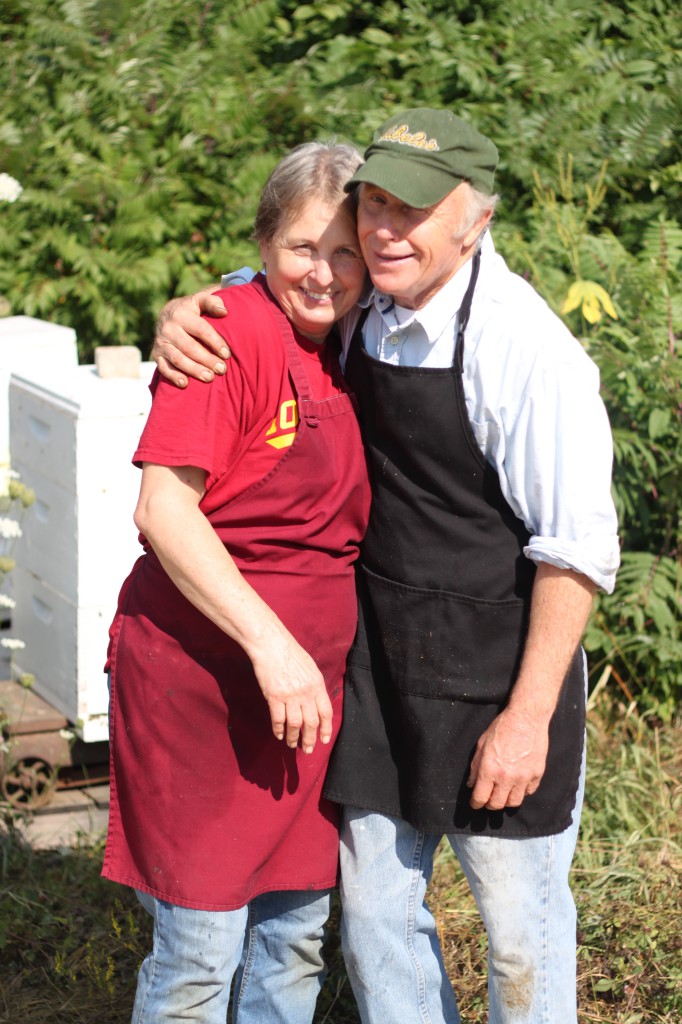 When I drove up to Fassbinders, their house literally looked like…a beehive. Bob and Kathy Fassbinder, a couple married for 40+ years and in the bee business for over 30, greeted me. Half a dozen high school and college kids were inside the processing plant harvesting honey. They eagerly described what they were doing, and why. “Do you know we get a THIRD of our food from bees?” They asked me. The moment I walked into the “Honey House” they started explaining how to harvest honey (which, even though I had grown up on a farm, sounded like a foreign language to me). I was frantically trying to keep up with what the girls were telling me, but eventually was so lost I said, “I need to get my laptop out!!” and Kathy, who also happens to be a nutritionist, sat down to explain everything to me. 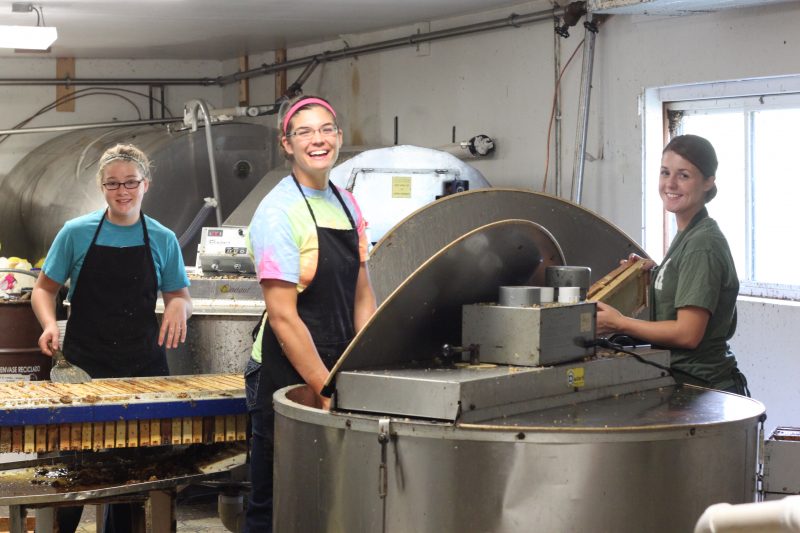 This place is so busy! Is this your only “harvest” season, or are there multiple seasons throughout the year?

[Kathy] Well, it depends. In a typical year we’ll have 2-3 seasons, beginning in the spring and ending in the fall. This spring we had a good honey flow. A lot of wildflowers, black locus trees, and dandelions yielded a lot of honey. The second season came in late June, with honey coming from basswood, alfalfa, and soybean. In the hives, the bottom box is the spring honey, which is harvested first. Now we “strip” the hives and are taking the honey from the second season. 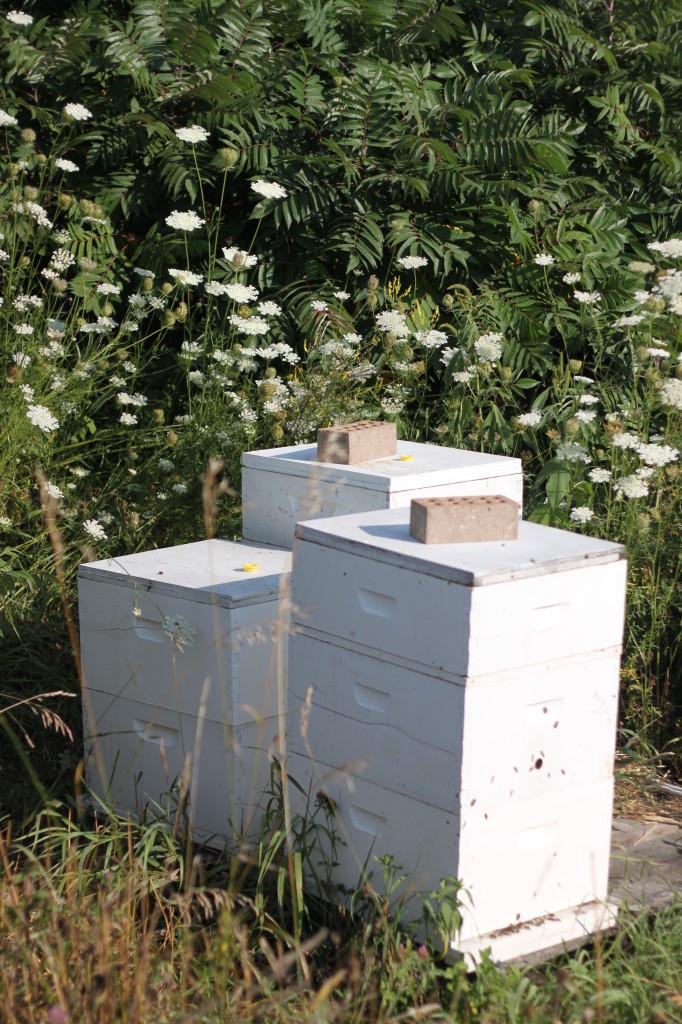 A beehive at Fassbinder farms. 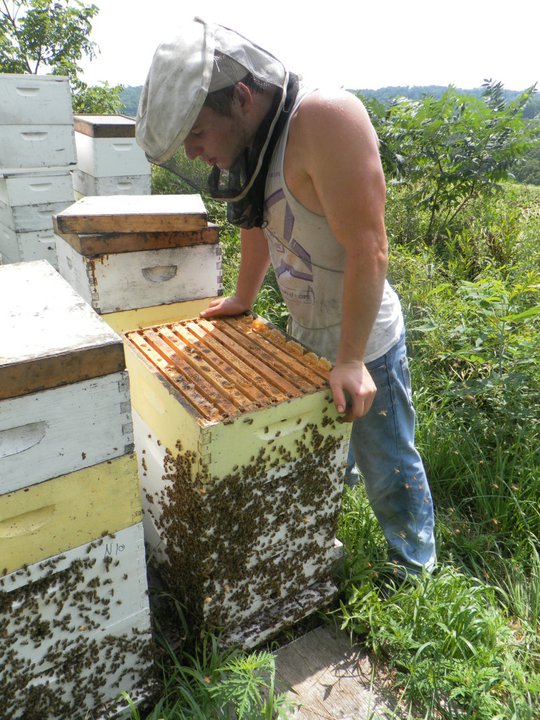 Bob and Kathy’s son Matt, checking to see if the hive is ready for harvesting. [photo credit: Sarah Bahe]

Honey comes from all those different plants? How do you know where it comes from?

We have four different tanks in which we store the honey. The color tells us where it came from. We could lump everything together if we wanted to, but people like the different varieties. My favorite is the clover honey, but a lot of people prefer basswood as it almost has a minty flavor. The strongest flavor is a fall honey, goldenrod, which also has the most antioxidants. We also get varieties from Spanish needle, and the asters – those little white flowers you see bunched together. 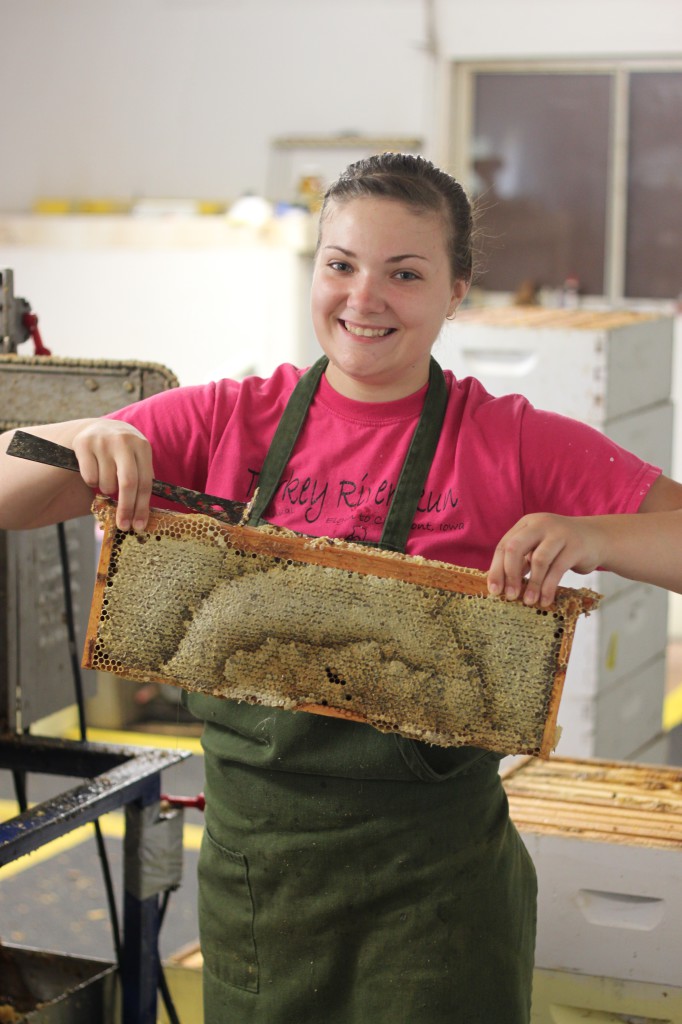 What the frames look like straight out of the hive – filled with honey and covered in wax. 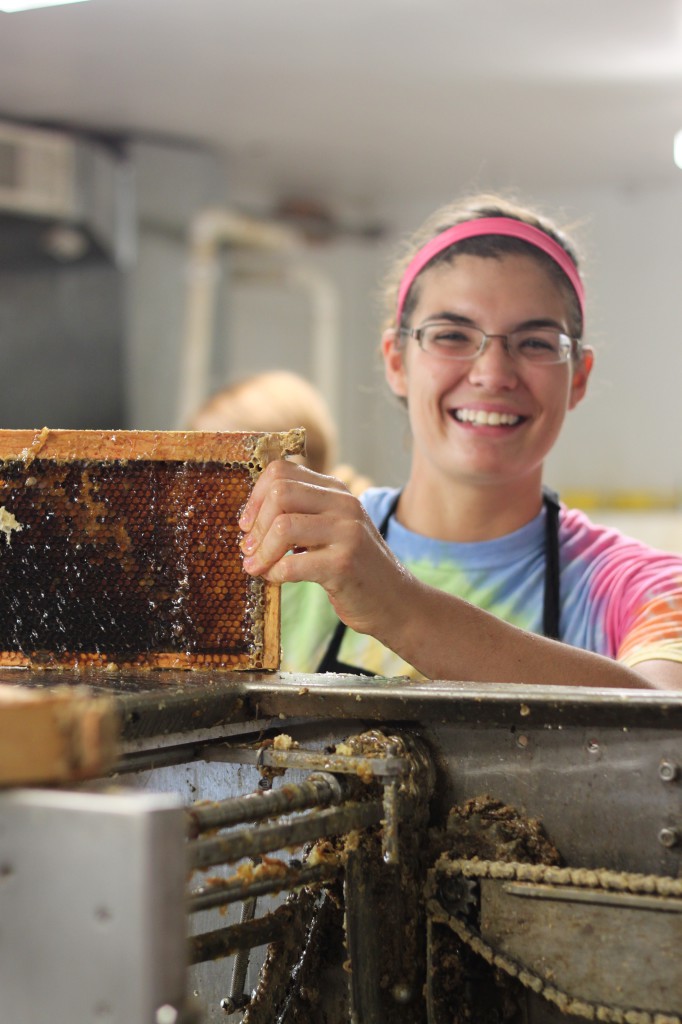 The wax has been scraped off, and now you can see all the honey in the comb!

There are as many varieties of honey as there are varieties of flowers. There are probably 300 different honeys available in the U.S. We once took our light honey down to Mississippi, but they preferred their privet hedge and blackberry – that was as black as molasses and tasted like licorice.

If there are so many varieties, why doesn’t it say so on the label? And how do you know what you’re getting at the store?

Big honey packers usually blend all kinds together. When someone is buying honey, you need to make sure it reads 100% honey. If it says “honey blend,” it’s usually mixed with corn syrup. The USDA is starting to crack down on scams where packers try to pass off adulterated honey (adding corn syrup) as pure honey. If you can buy from a farm, and if you can purchase within the United States, that’s better. Honey purchased from China has been tainted with illegal antibiotics.

Why does your honey look different than the raw honey I buy in the store? And why is it so important to buy raw honey, anyway?

Honey is a natural sweetener filled with antioxidants, enzymes, minerals, and some vitamins. Although it’s still a carbohydrate – and you can’t ignore your carbs! – it allows people to get a hint of sweetness without using so much table sugar. However, you don’t want to heat honey over 120 degrees because it will inactivate the beneficial enzymes. Big packers heat their honey to 140 – 160 degrees, so it won’t crystalize on the shelf. Crystalizing is a natural product of a natural solution, but consumers see crystalized honey and think something is wrong with it. We only heat our honey to 100 degrees – just enough to have the honey flow like maple syrup. Since we don’t do much bottling, we can do that. If we were trying to supply a large grocery store, we couldn’t do that. The honey people are buying from us now is fresh out of the comb, but it will eventually crystalize during winter. If you find honey from a local source, they won’t heat their honey to such a high temperature. Everything we sell is raw honey. 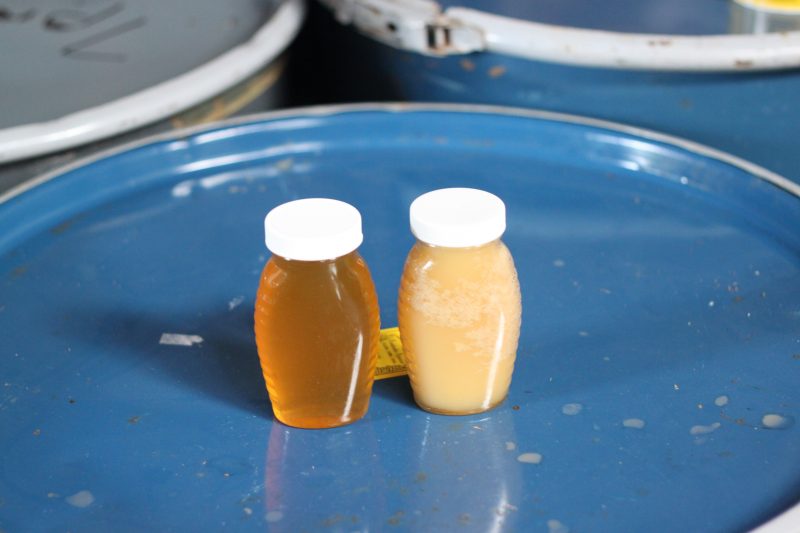 The longer you heat honey, the more it will darken. This is the result of a monochariade breaking down. However, the majority of the U.S. population prefers a lighter honey. This is why packers prefer the honey to not have any heat on it when they receive it. Natural, darker honey has more antioxidants and more enzymes, but that doesn’t mean the dark honey you find in a store is “better” for you. It’s not darker because of the plant it came from; it’s darker because it’s been heated longer.

How can honey be “organic”?

It is so difficult to control. We’re not organic, but we try to be. We actually went to a seminar on how to become organic, and you literally have to prove that those flowers that those bees flew to to make that honey were organic flowers. We would have to live in an endless area of organic farmland.

We are also not organic because we treat the bees for mites. The mite is a varroa mite which latches on to the back of bee, sucks out the blood, and kills the bee. It started in the Asian bee, jumped breeds, and got into the Western bee. It is very difficult to control. It’s a curse. If we did not treat for the mite, the bees would probably last two years and then all be dead. To keep an apiary going, you need to control that mite or your bees will continually die. We will never “treat” the mite if there is already honey inside the hive. When we do treat it, we do so by spraying an organic acid on top of the hive. The acid is made from rhubarb leaves. We are always looking for better alternatives. Our daughter invented a liquid made from the perilla plant while she was in high school. We patented the formula, but the potential producer said it was not “economically feasible.” It was too complicated of a procedure and they didn’t think their was a big enough market for it. 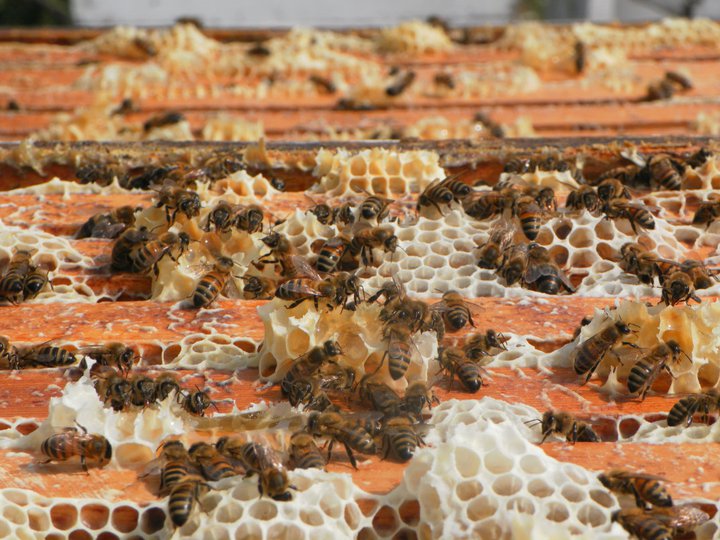 Kathy walked me back inside to where the girls were busy harvesting the honey. Her husband was busy loading hives onto the back of a flatbead truck. There were actually very few beehives kept next to the Fassbinder home. Instead, 200 hives were distributed across 60 different farms all across Northeast Iowa, to keep the environment as natural as possible.

Where did the saying, “Save the bees,” come from?

[Bob] Every year, bee farmers will load up an entire semi full of beehives, and drive it out to California. It’s not about the honey – they couldn’t care LESS about the honey! The farmers get paid 60 thousand dollars for delivering ONE truck. That’s a comfortable salary for a year, and all you have to do is drive one truck to California.   The bees are going to pollinate the almond farms in California. Sometimes the bees arrive completely unharmed, sometimes over half the bees will be killed in transit.  Go ask Rachel about this, she has pretty strong opinions on it. [Side note: If you suddenly feel guilty for snacking on almonds (as I did) while reading this; munch on pistachios! They are pollinated by air, not by bees.] 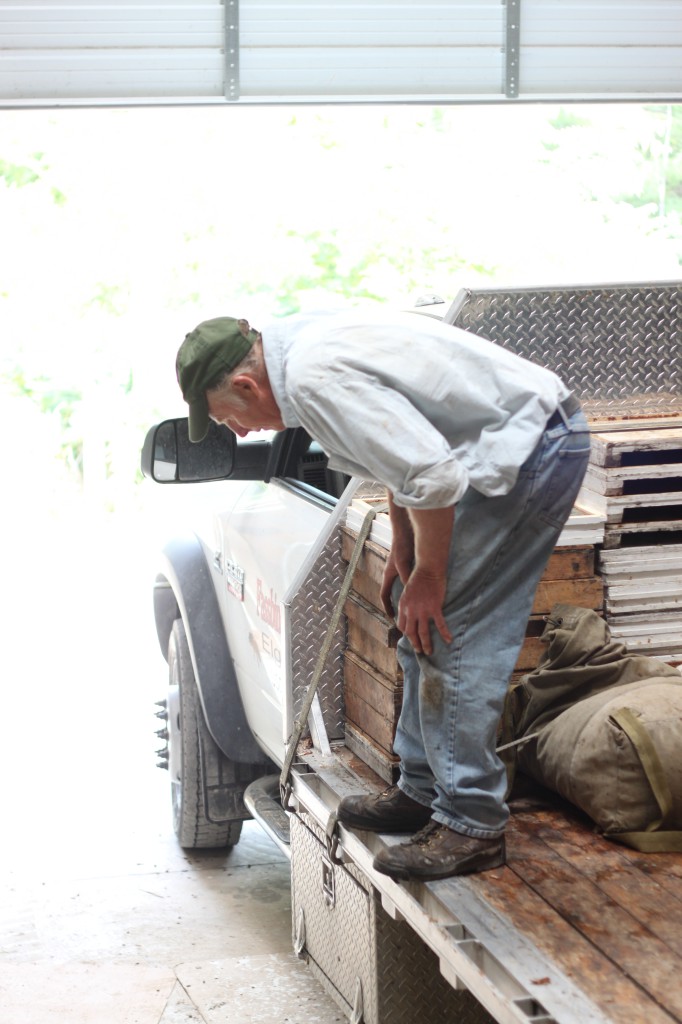 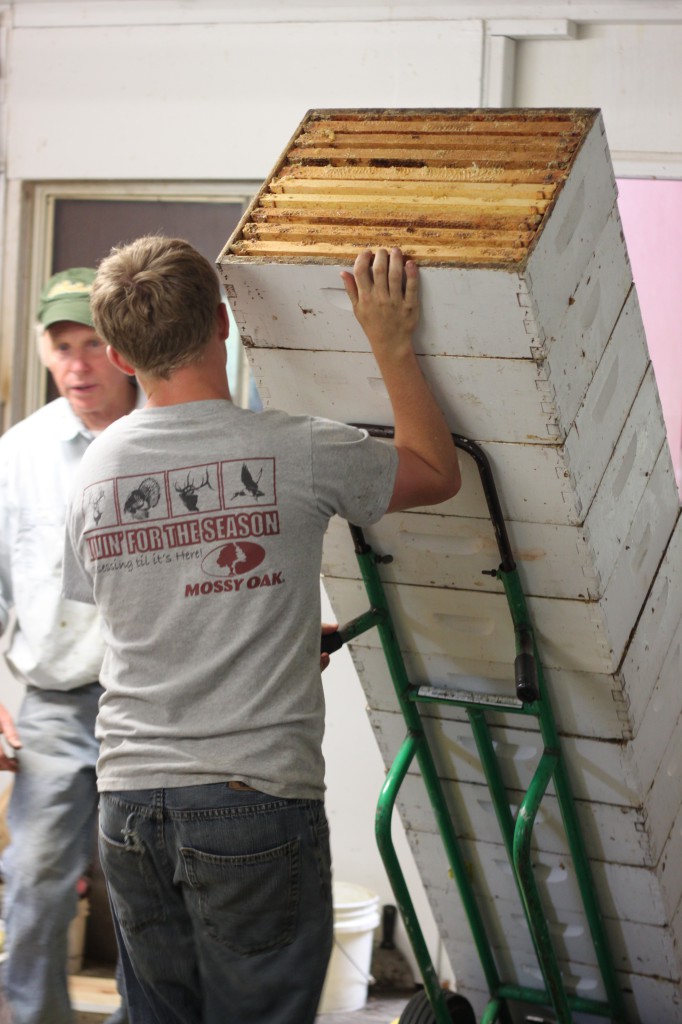 The empty hives, ready to go back out to the fields

So I went to talk to Rachel, a girl who had been in junior high when I graduated high school.

Rachel! I’m supposed to ask you your “strong opinions” on this.

[Rachel] Well, bees give us one THIRD of the world’s food. Some people think that we can move things around, like we move hives around or move the bees to California, just because we can. They think that’s a more “efficient” way of doing things. But I think that where things are in nature is where they’re supposed to be.  Things grow or live where they do for a reason. So where things are, are the way things should stay. 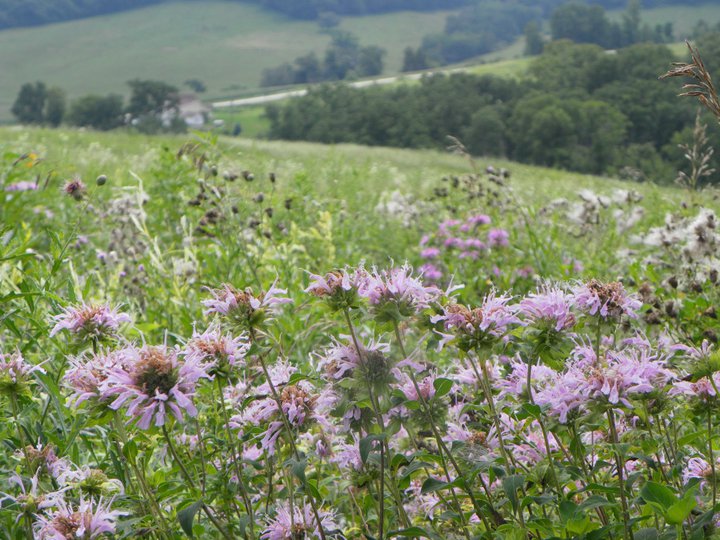 A few more facts about the bee epidemic: