This past weekend Bill and I got to celebrate two family birthdays, which meant splurging on two grain free treats…YUM! The first of the celebrations was for Bill’s brother-in-law Chris. Bill’s sister Nellie has hinted a few times that she wanted us to try to come up with a grain-free version of tiramisu since it is one of her favorite desserts as well as her hubby’s. I never really gave the dessert much thought, because it just seemed way too intimidating, and I thought we could never make it happen. Finally I had a real reason to actually see what was involved with the recipe and decide whether it was do-able or not.

Nellie wanted an Italian themed menu, and requested that we try to make tiramisu to surprise Chris with for his special birthday dessert. Bill’s mom (also named Nellie), then sent me several tiramisu recipes that she had used in the past so I could get a feel for what the recipe entailed. Once I took a look at it I almost jumped for joy out of excitement. A layers of cookies, coffee syrup, and creamy filling? I could totally make that happen!

A little disclaimer on this recipe: It involves A LOT of dairy (similar to our cheesecake recipe found in Make it Paleo). It also contains alcohol. We have said in the past that the desserts we make are NOT Paleo. They are grain-free, sweetened with maple syrup, and are a TREAT. There is a time and a place for desserts, one of which being a celebration, and this birthday was definitely cause for a celebration.

Tiramisu typically is a layer of lady fingers, soaked in a coffee syrup, topped with a blend of mascarpone cheese and whipped heavy cream, and then repeated with another layer of cookies and cream topping. The top is dusted with cocoa powder, then chilled for 24 hours, and voila! You have a delicious Italian dessert.  For the lady fingers, we opted for a coconut flour recipe modified from a recipe we found on Eat Nourishing. The cookies turned out great, they were not as fluffy light as classic lady fingers are, but they worked just fine. Bill’s mom is horribly allergic to mascarpone so we subbed full fat, organic cream cheese. For the coffee syrup we decided to use amaretto instead of brandy. We actually made this dessert at my aunts house and raided her liquor cabinet for something suitable for the syrup, and after smelling many a bottle of liquor, we decided to throw in some amaretto for a hint of gourmet deliciousness.

All in all the recipe turned out great. It definitely put a huge smile on Chris’s face, which we all enjoyed seeing! 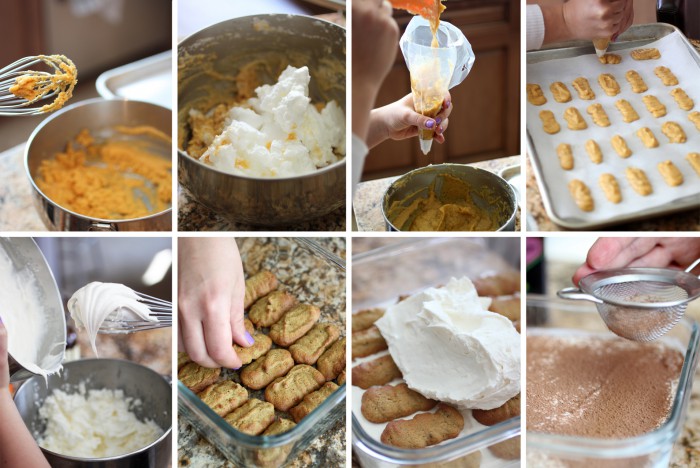 This decadent Primal treat is both delicious and fun to make. Please note that this recipe relies on three other recipes (Lady Fingers, Coffee and Amaretto Syrup, and Cream Cheese Filling) - which are all listed below as ingredients. However, with a bit of patience, this dish is a breeze and will surely impress any dinner guest.