How to Heal Leaky Gut 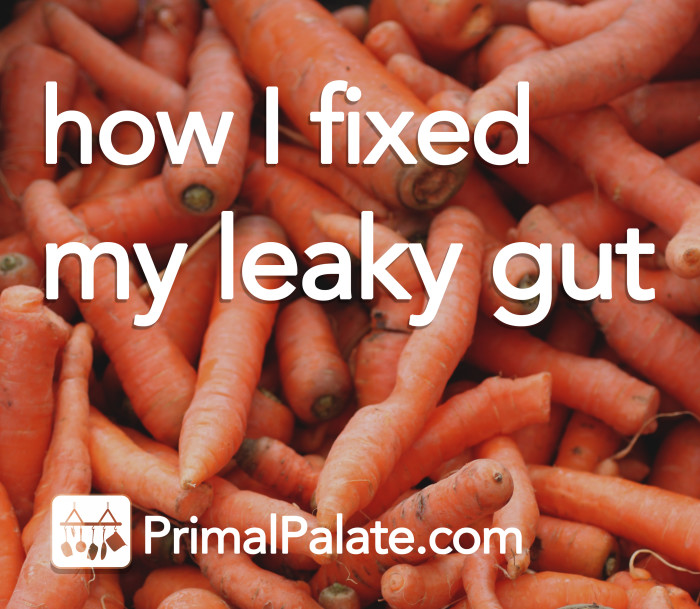 This post is a long time in coming… almost 2 years, in fact. It was two summers ago I first wrote about FODMAPs, and my intolerance to them. I discovered my sensitivity to these foods while Hayley and I were writing our first cookbook, Make it Paleo.

When an intolerant individual eats a FODMAP food, they experience severe discomfort, bloating, and sudden onset diarrhea. FODMAPs are foods that contain short chain carbohydrates. Unfortunately, these foods aren’t as easy to simply identify as a major food group like dairy or nuts. FODMAP foods can be found in all the food groups!

I’ve written three posts so far on my gut issues, so to get the whole picture, you can read the posts:

To paraphrase those three posts (but seriously, read them), an intolerance to FODMAPs is not a condition – it’s a symptom of a gut condition. In my case, that condition was Leaky Gut, and I wasn’t able to fix it by just eating Paleo. That may come as a shock to most of you, but just eating Paleo wasn’t enough in my case; and knowing what I now know about leaky gut, I’m guessing it may not be enough for most people. Over the course of the last two years, I’ve come to learn what was causing me to have IBS-like symptoms (Part 1). Last fall, I decided I was tired of just managing my symptoms and wanted to see a doctor (Part 2), which I recommend for anyone experiencing gut distress. After going through a stool test and getting a diagnosis from our family holistic doctor, I found out that I had Leaky Gut (Part 3).

What is Leaky Gut?

Leaky Gut is usually caused by eating foods with anti-nutrients, causing small perforations in your small intestine lining. Typically, people that eat or have eaten grains and legumes for a long time are prone to getting Leaky Gut. When you have Leaky Gut, small perforations in your small intestinal lining allow larger-than-desired food particles to pass through and enter the bloodstream. This leads not only to malabsorption, but it also triggers an ongoing immune response in your body. When the food gets through the lining in that manner, the body perceives it as invasive and initiates an immune response. This is problematic, because being on “high alert” all the time lessens the effectiveness of your immune system. As someone that got sick 4-6 times a year, I can attest to having a compromised immune system from Leaky Gut.

This is where things get interesting. Dr. Berez recommended that I do a stool test so that we could all get a better idea of what was going on in my gut. Leading up to the stool test, I had to eliminate any foods with probiotics for 2 weeks. This meant that I had to curb my daily kombucha addiction. In its place, I started drinking aloe water every day. Ironically, I believe drinking aloe water started the healing process in my gut even before I took the stool test. I started experiencing some symptom relief before the stool test, and was ironically symptom free during my 3 day sampling. I was worried the test would thus prove inconclusive. Luckily, that wasn’t the case, although my results did come back negative for a host of gut problems such as:

What the test DID show was that I had great gut flora (go Paleo!) but I had a tremendous imbalance of Beta-glucoronidase from eliminating cruciferous vegetables (most of which are FODMAPs). This imbalance can lead to big problems if gone untreated, like colon cancer. Fortunately for me, that imbalance was just temporary from my avoidance of crucifers, so nothing to worry about. I also had blood work done at that time, which showed that I had a lot of food sensitivities (not allergies). These sensitivities included nearly all grains and dairy, which I’ve luckily avoided for several years now. It also included ginger, green beans, curry, and sunflower seeds.

Dr. Berez concluded that my gut disruption must be linked to Leaky Gut, which is a common problem for people to have that have followed a conventional, food-pyramid based diet (Which I did for 26 years of my life). I’ve had IBS-like symptoms since high school, so that part made sense. Dr. Berez concluded that my former gluten-filled diet constipated me enough to balance things out at times, thus not having an overwhelming host of symptoms, at least gastric symptoms. However, throughout my life, I’ve always felt sickly – getting colds and sinus infections several times a year, every year. A common cold would knock me out for 5-8 days, whereas it would take a healthy person 2-3 days to get over it. Immunity starts in the gut, and if you have a leaky gut, you have severely compromised immunity.

Given the Leaky Gut diagnosis, Dr. Berez prescribed a host of supplements and med’s to start the healing process. (This is not intended to be medical advice, but just to relate my own experiences.)

In addition to Dr. Berez’ protocol, I also continued to drink aloe water on a regular basis for the first 3 months of the healing process, and occasionally on an ongoing basis. I largely avoided coffee for 4 months, to avoid disrupting the benefits of the homeopatic remedy. I also largely avoided sugar in the diet, and followed a sort of relaxed GAPS diet. My basic meals were meat and veggies, with very little fruit. I drank a lot of bone broth, and slowly introduced FODMAPs back into my diet. During this time, we were working on our latest book, The 30 Day Guide to Paleo Cooking – which has almost 100 great recipes for squeaky-clean Paleo eating.

How long does it take to heal Leaky Gut?

Dr. Berez said to follow the protocol for 4 months. I’ve heard others say 6 months. I even got a few people on our Facebook Page that said 1.5-2 years. In my personal experience, true total relief came between 5 and 6 months. Significant progress was noted 2-3 weeks into following the protocol, but episodes did not fully cease until a few months later. Being symptom free for me means I can now eat virtually all FODMAPs without any irritation (except red onion and shallot). I’ve been relishing the opportunity to have dishes with onions, garlic, coconut milk, avocado, and cruciferous vegetables that I haven’t had in many months. It also means that I’m not getting deathly ill several times a year. I’ve been sick only once in the last 9 months, and it was for 36 hours. I’m not kidding – I kicked a sinus infection inside of two days. That would have been a 8-10 day ordeal for me before healing my gut.

I was reluctant to write this post for a long time, as I wanted to be 100% sure I was at least on the track to getting healed. No matter what length of time you believe, all sources agree that fixing a Leaky Gut is not a quick process. From the time I decided to make a doctor’s appointment to the time relief from symptoms, it was about 6 months. Also understand that feeling relief from symptoms does not necessarily mean you’re “cured” … but following a Paleo diet will most likely prevent you from backsliding.

You have to be diligent with the supplements (particularly, in my opinion, the Aloe, Slippery Elm, and Marshmallow Root). If you have Diane Sanfilippo’s book Practical Paleo, there is a handy guide on page 88 for Leaky Gut. She describes the 4 R’s of Leaky Gut healing:

Last but not least, I’ll just harp on this one point. If you feel like you might have leaky gut or something similar going on – go see a doctor. I would have never been able to properly diagnose my condition without seeing Dr. Berez, and getting a stool test. It is a tricky condition to diagnose (despite being so common). Be patient. Eat the right foods. And don’t lose hope – it can be fixed!!