To say I felt uncomfortable when I walked into CrossFit Mt. Lebanon would be an understatement. I had texts from Bill and Hayley saying they were stuck in traffic, and I should start the interview without them. The gym was completely empty except for two people – one squatting, the other spotting. The weight on the bar was somewhere between double and triple my bodyweight.

I had found out Anna Tunnicliffe lived in Pittsburgh by pure chance. I was browsing the bios of CrossFit athletes who made the Games this summer, and stopped when I saw one was from Mt. Lebanon – a Pittsburgh suburb. A local athlete heading to the games? Awesome!

Then I read her bio. It’s not uncommon for top-tier CrossFit competitors to have a long-standing background in athletics. Almost everyone who placed in the top ten in their respective regions had been collegiate, or even professional, athletes. Anna checked both boxes, then took it up a notch. She was a Gold medalist in the Bejing Olympics for sailing. 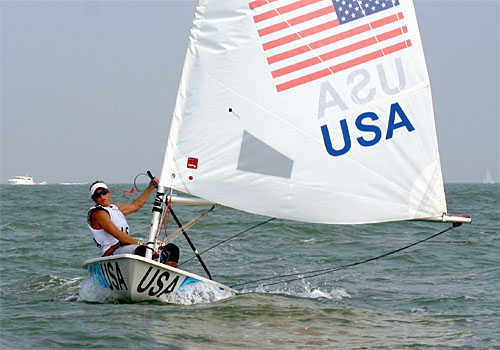 So when she racked the bar and came over with her coach, Brad, to greet me, I said the first thing that popped into my head: “I don’t want to f-up your workout.”

And under a whole new level of multitasking, that’s exactly what we did. For the next 45 minutes, stopping only a few times to talk with her coach, Anna answered all my questions between sets. I sat cross-legged on the floor of the gym next to the squat rack, as Anna and Brad set up the bar for a round of clean and jerk. As soon as the bar hit the ground, I asked my first question.

So how did you find CrossFit in the first place?

I was training in Chicago and the friend I was staying with said, “Hey come check out this gym I workout at.” I completely fell in love with it. I needed a change in my workout, and CrossFit is an awesome way to stay in shape. Before, I would run 4-6 miles, do a weight program that lasted 2.5 hours, then go sailing. Six days a week. Working out was my job, and it got really boring. I was working out anywhere from 2-4 hours a day. 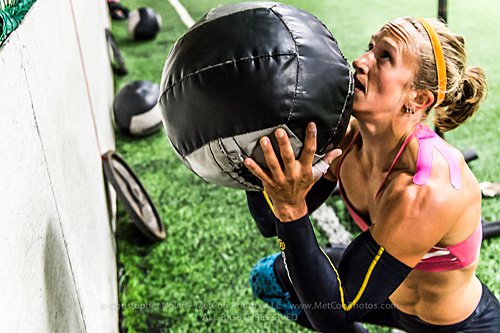 And when – or how – did you transition your diet to strict Paleo?

Through him [nodding at Brad]. He basically walked up to me and said, “Try this diet out.” He told me the reasoning behind it, and to me, it made sense. Everything revolved around being stronger, healthier, faster. Before Paleo, I followed the typical “athlete diet,” – i.e. carb loading. I still drink milk, mainly to keep weight on. I lose weight very quickly if I don’t. Two weeks out from competition, I cut out milk. I may add in quinoa during competition. I’ve tried adding in rice or even bread, but it hurts my stomach.

When I first started, I was STARVING. I would text him and say “Ok I’m really hungry what can I eat now?” I had a small decrease in energy, but mainly I was just starving!

[Brad]: She was so scrawny when she started though.

What do you eat on a typical day?

I usually eat 4-5 times a day. If I forget my snacks, it’s four. For breakfast, I have a frozen smoothie made from orange juice, a little protein powder, coconut butter, and berries. Then for “real breakfast,” I’ll have eggs with a little bit of meat. For lunch, we order from a local Paleo delivery service – Pittsburgh Fresh Meals. Then for dinner, I’ll have meat and vegetables. Sometimes I’ll throw a few sweet potatoes in there, or have berries with coconut butter for dessert. For my snacks, I’ll have an orange, small pieces of meat, or some nuts. 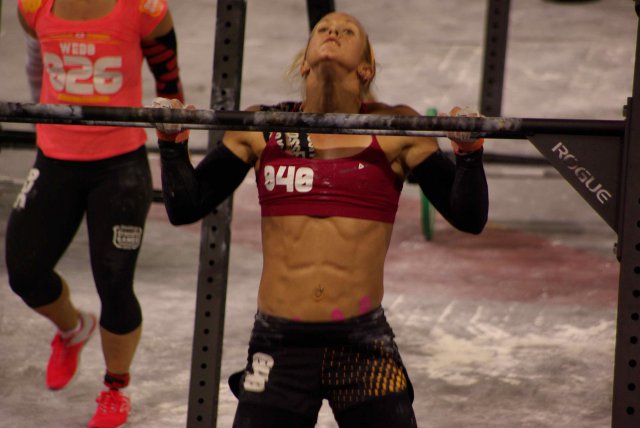 Let’s talk a bit about sailing. That’s a pretty unique sport. How did you get into it?

My family sails, so I grew up sailing. I come from a very athletic family. My brother is an ultra runner, and my mom and dad both CrossFit. My mom placed in the top 200 of the Open last year. I’m stubborn in a lot of things, and if I want something bad enough I go after it. I wasn’t that great at sailing until college. In college, I had a really good team and good coaches, and went directly to train with the Olympic sailing team when I graduated.

I’m retired from Olympic sailing, but still sail with a Swiss team in an extreme sailing series. That’s how I get my sailing fix. We don’t practice together – it’s just expected that everyone’s good enough to do their job right. We might practice two days together before an event. 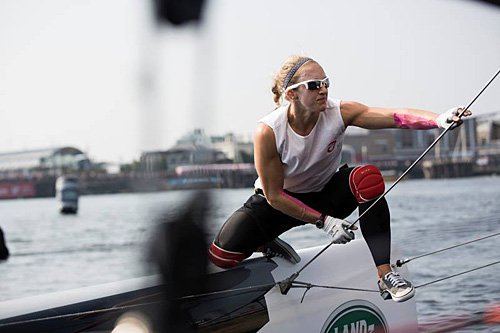 How did your previous strength training compare to CrossFit?

This is where I learned to squat. In college, you’re always told to never go below parallel. I never did deadlifts or front squats, just the typical “globo gym” workouts. I wasn’t very strong yes, [looking at her coach] but put the work in. People discredit CrossFit or Paleo because it’s new, or because it goes against things they’ve previously been taught. People have been so set in their ways for so long, you’re going to have someone say, “That’s not good for you.” Gradually, a lot of programs are starting to incorporate that high intensity aspect into their workouts.

I like the fact that CrossFit is always different. It’s as competitive as you want to make it. The best part is the community. I’ve been in a competitive field all my life, and never met a group with such camaraderie for every person, of every level of fitness. 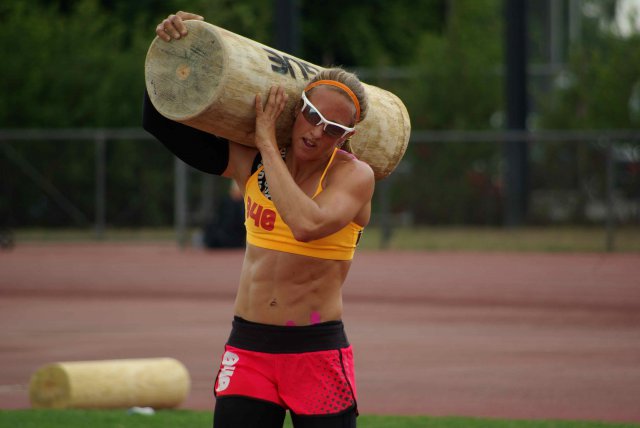 What motivates you? What keeps you going?

[Brad]: Team meaning, she’s the celebrity of the gym but everyone’s afraid of me.

[Anna, looking at me]: That’s true; you can put that down. We’re both on the floor, and people that are afraid of Brad come talk to me.

I love competing more when there’s a cause. When I went to the Olympics, I wanted to bring a gold medal home to the U.S. That was my purpose. In CrossFit, my coach puts everything he has into my training, so I want to give everything I have back. He knows when I’m giving my best effort; so as long as I am, he’s happy.

How do you motivate the people you coach?

Honestly, it depends. Truly knowing your athletes is important. If someone wants an aggressive push, we can scream at them. If they’re the type of person who wants a cheerleader, we can do that too. If someone is having an off-day because they’ve gone 5-6 days straight, I just tell them not to WOD. If they’re simply having trouble getting motivated, I try to have them set small goals. I might say “Hey, go for 20 wall balls at a time rather than 25,” so it doesn’t seem like such a scary number. I just started a company, Destiny by Design, to coach people on setting goals. I’ll talk to sports teams or business groups the same way I talk to my athletes. In order to reach a goal, you need four things: dream, desire, dedication, and discipline. Every day, you need to go out working toward your goal.

If someone is new, I always say the same thing: just have fun with it. It’s not a competition. You’re here because you’re up for the challenge. Just take it at your own pace. If you have a question, ask. If a movement makes you uncomfortable, ask. We have an awesome community here, and everyone is great. If we get a new member, everyone else has already gone up to them to talk before we even have the chance to introduce them. 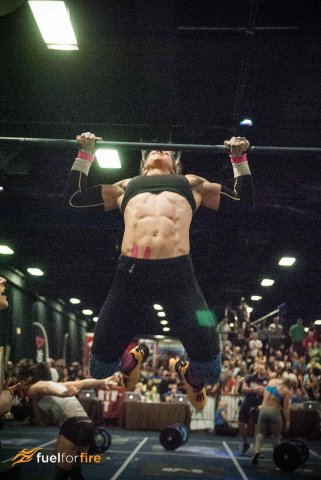 Last two questions: 1) What are you looking to achieve at the games? and 2) After all your years of competing, do you still get nervous?

I guess we’ll see. I have to be there the 21st of July. I’m looking to better my performance last year, and potentially make the podium.

Do I still get nervous? Oh yea. All the time. Sometimes I get nervous just for our WODs. But as soon as the buzzer goes off, everything else goes away. If I’m in here working out by myself, I need to have someone start the clock for me. Otherwise, I just stand there. But as soon as I hear, “3-2-1..” I’m fine.

We’re starting our next Paleo challenge off April 1st!  Grab a friend, download the guide, and join us for one month of strict, clean Paleo eating. It includes everything you need to get started today! (click the link below)