Okay, this is the LAST fried food treat for a while. I don’t know what possessed me to make Funnel Cakes, Onion Rings, and Churros in the same week, but it was amazing and delicious. And after today’s post, we’re going to get back to more everyday recipes. 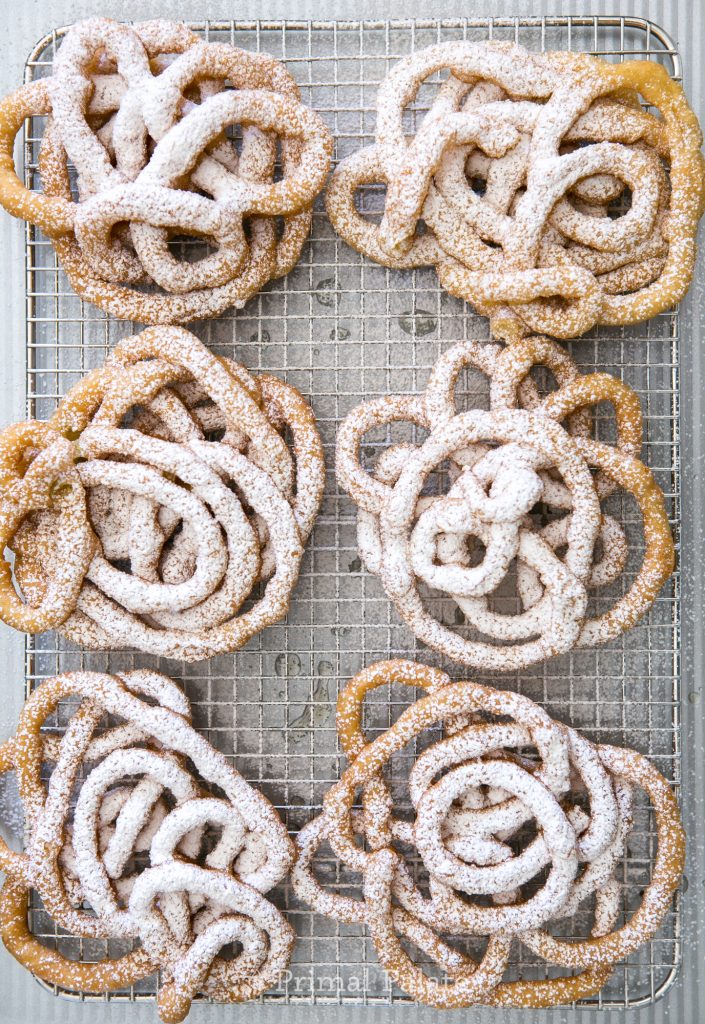 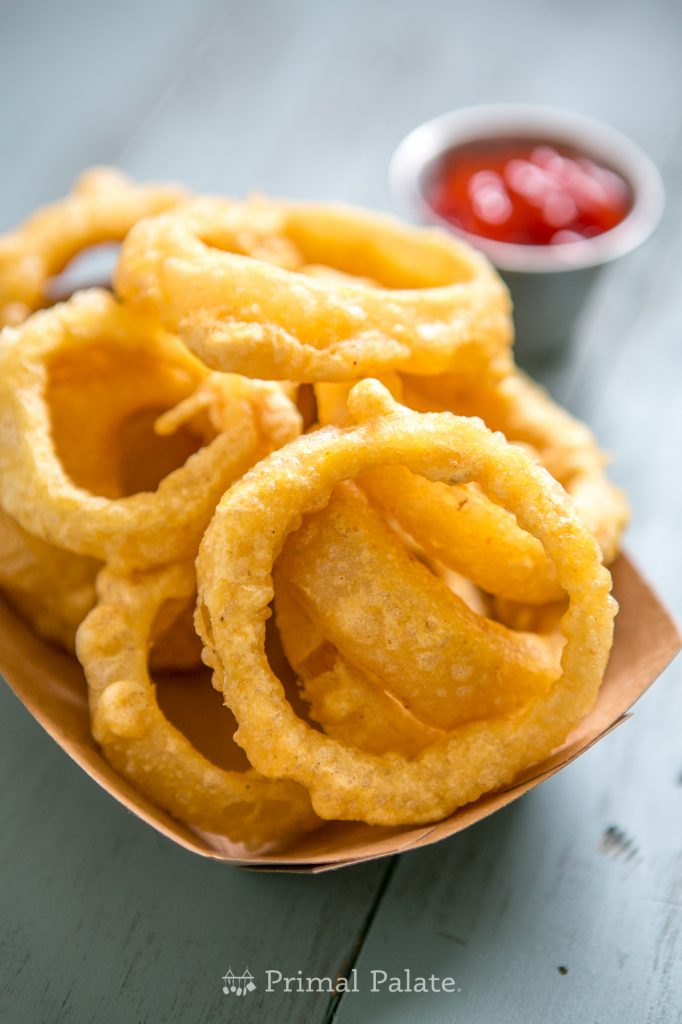 I’ve always loved churros. They are closely related to the Funnel Cake. Believe it or not, it’s basically the same batter. I think it dawned on me that Churro and Choux (the type of batter for funnel cakes) sound remarkably similar. After a brief confirmation on Wikipedia, I learned that indeed they are the same batter. Churros are different all over the world, ranging from fruit fillings, to having chocolate and vanilla on them, to the cinnamon sugar version here in the United States.

This was the perfect recipe to make this week, because OUR CINNAMON SUGAR COOKIE BLEND IS BACK! Surprise! 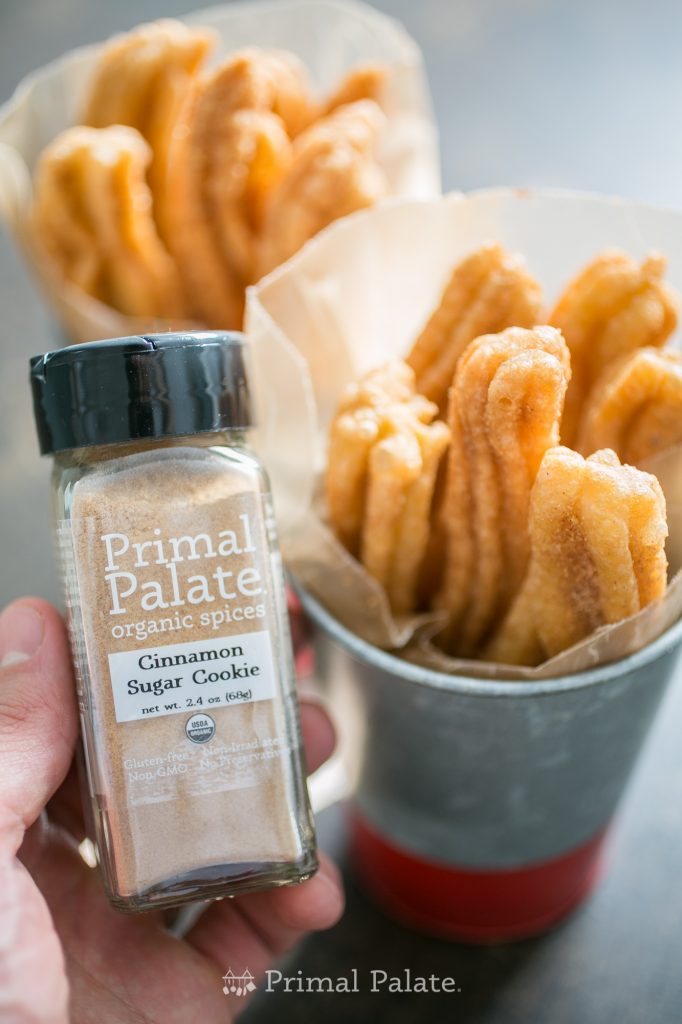 We’ve been planning on bringing it back for months now, and it’s already in stock and ready to ship out! We’re offering it in a 3-pack (below), so you can make A LOT of Churros. Click below to order it! 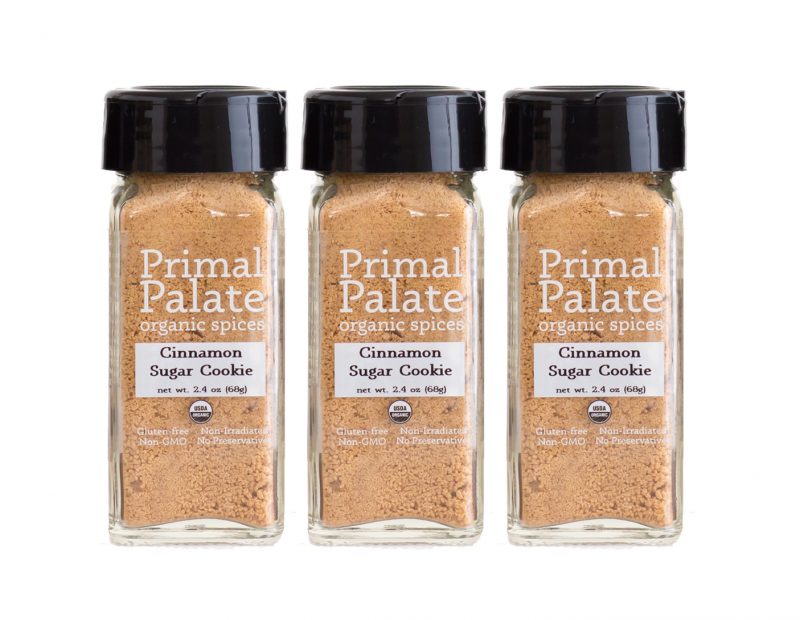 This recipe is so easy to make, and turns out awesome every single time. We’ve been dying to share it with you (and it’s been even harder to keep teasers off of social media.) 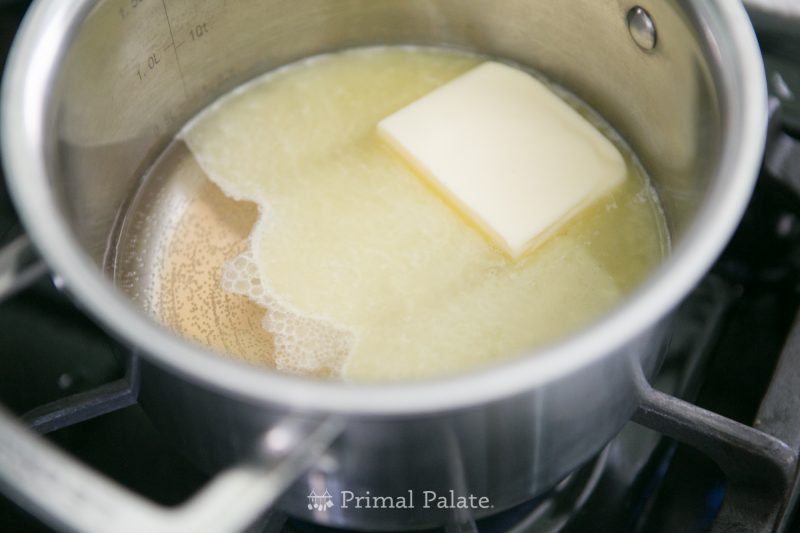 You start off exactly the same way as you do for our choux-based Funnel Cakes: water, butter, and maple syrup boiled together. Then you stir in 1 cup of cassava flour and remove from heat. When it forms a cohesive ball, allow it to cool to the touch (about 5-8 min). 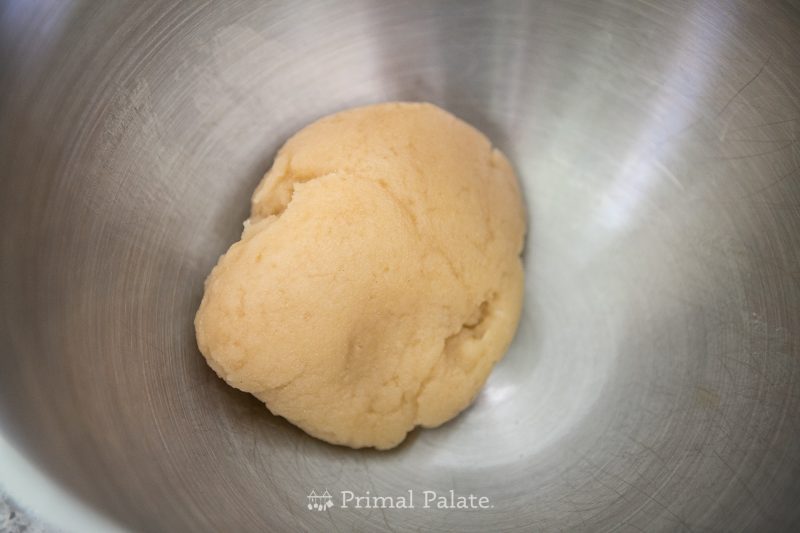 After it has cooled, you’re going to add it to a high speed blender or food processor, and begin to add in the eggs one at a time, along with the vanilla. 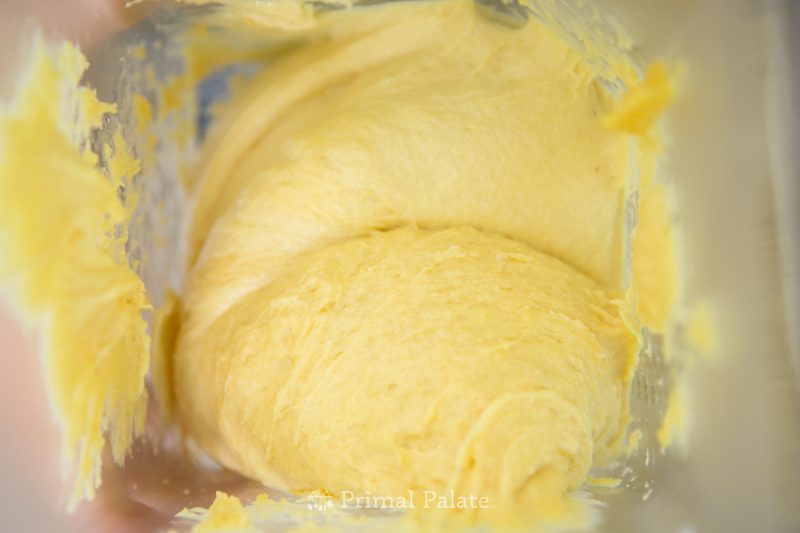 It will be a thick batter type dough, which is perfect for piping. Pack it into a vinyl piping bag (recommended to withstand the heat of the frying oil!) with a star shaped tip. (Skip to a few steps below for Ice Cream Cups) 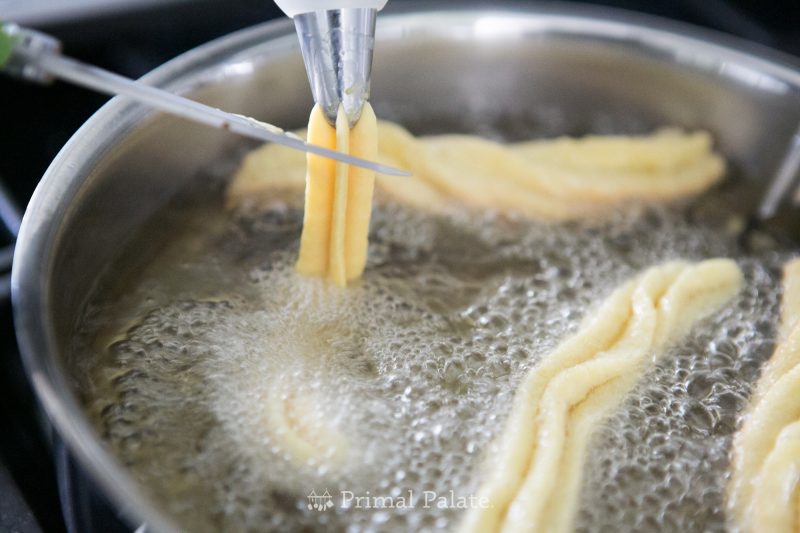 Heat at least 1″ of oil into a wide, low walled saute pot, to 350F. The low walls will help you keep the churros straight, and cut them with scissors. Pipe into straight lines (as straight as you can, but it’s hard). Then cut to desired length. After you’ve cut them, you have about 5 seconds to use the scissor tips to straighten the churros out before they fry and firm up. You’ll see what I mean when you make them. 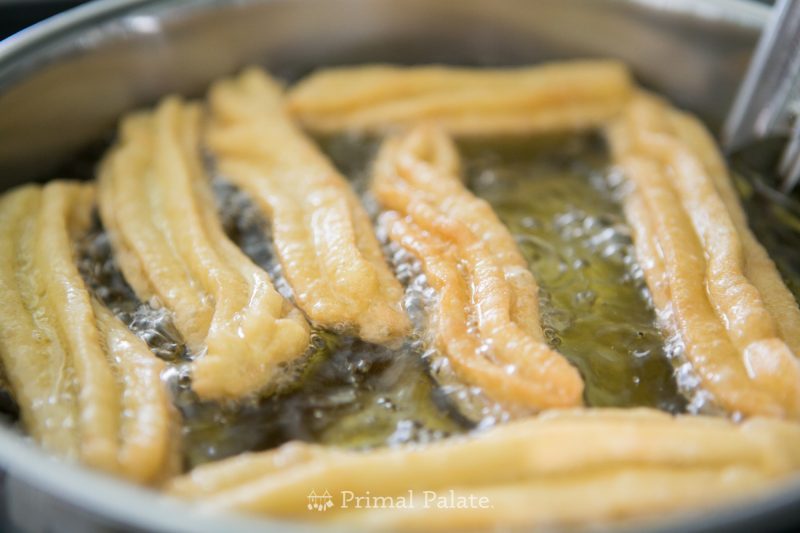 Overcrowding your frying pot, like this ^^, will lower the temperature of the oil and you won’t get as consistent of a fry. So make sure you only do 3-4 at a time for stable oil temps. 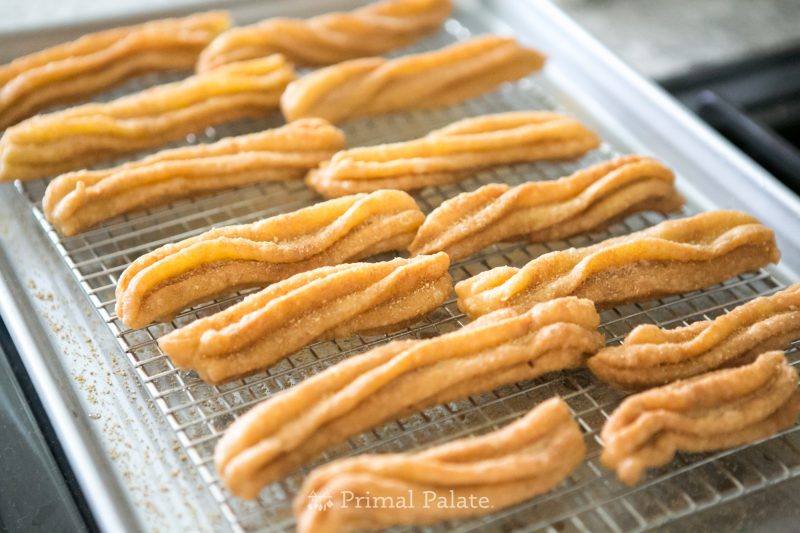 Drain the churros on a wire rack, and sprinkle with Primal Palate Cinnamon Sugar Cookie immediately so that it easily sticks. And that’s basically it! Serve them hot, or plan to serve within a few hours. As time goes on, they’ll get soggy (they are fried, after all). 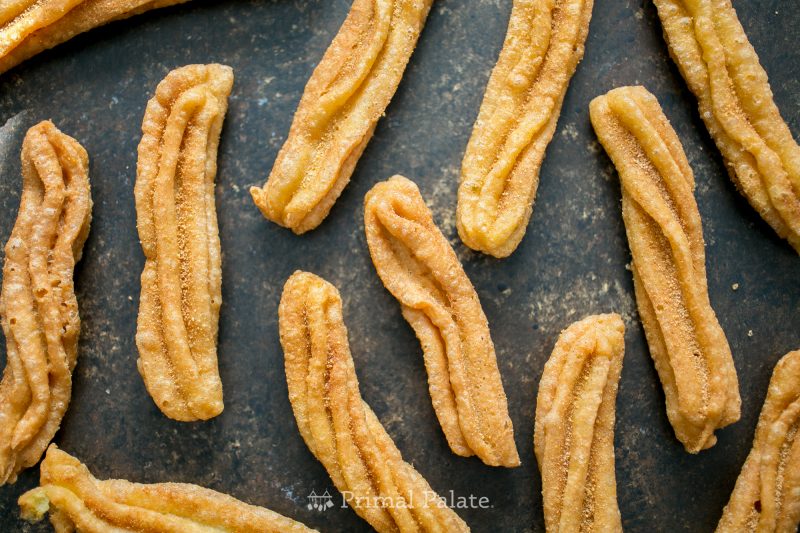 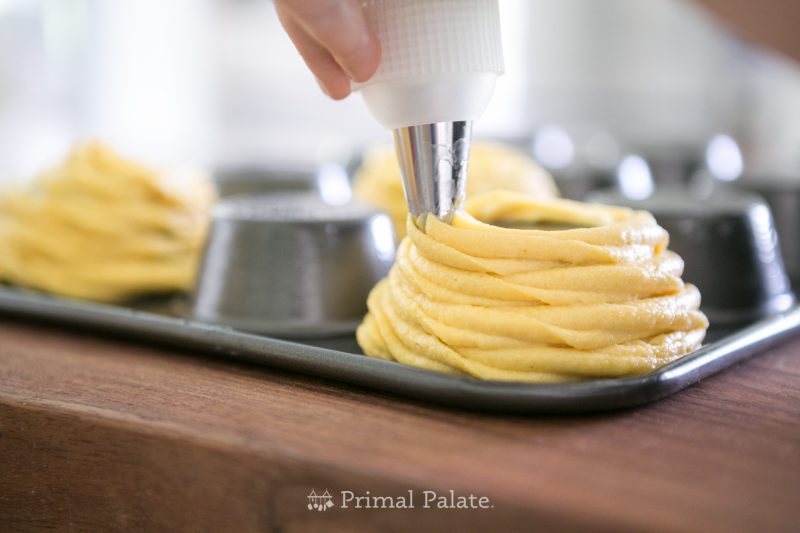 We saw this idea via Tasty (on Facebook), and it looked AWESOME. So we had to give it a shot!

If you are making these into ice cream cups, generously grease the underside of standard muffin tins, and pipe in swirls all around the cups. Then freeze for about 1 hour. 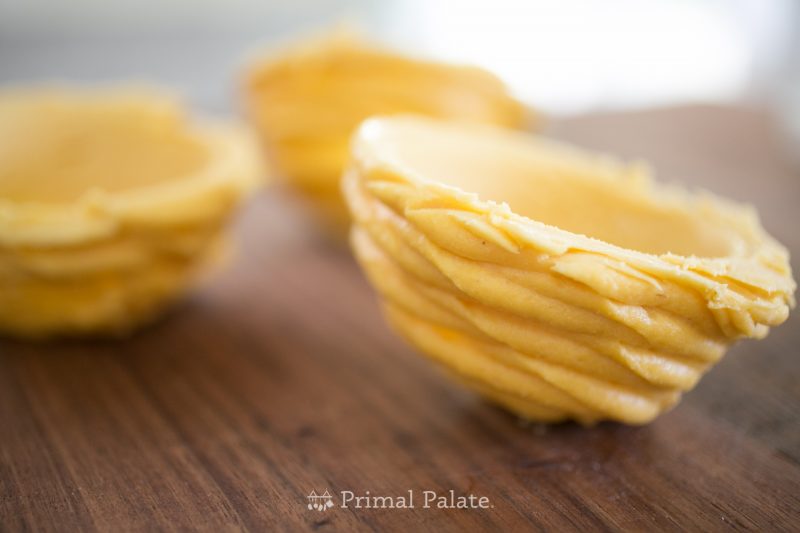 Once firm and frozen, pop them off using a frosting spatula or spoon. Depending how generously you greased the tins, this might be easy or really hard. Ours was on the hard side, but they survived. 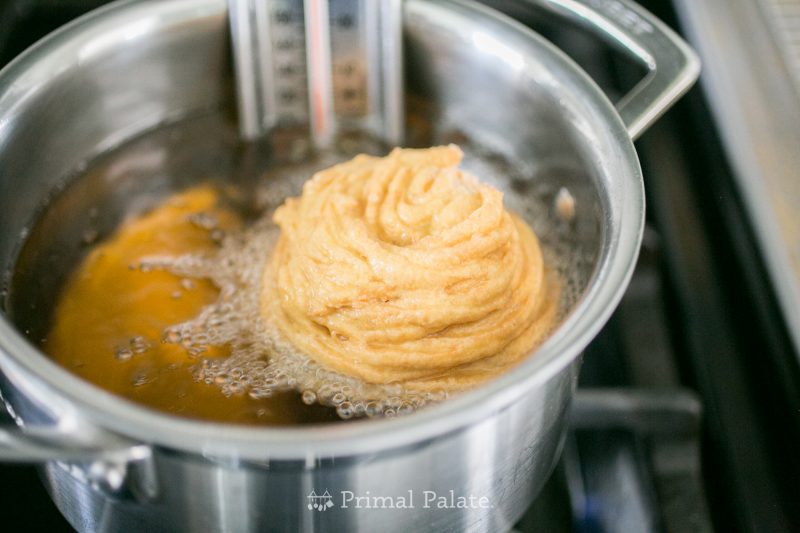 For the frying, you’re going to want these in a small pot with deeper oil (due to their shape). They fry in 3 minutes, so just do one at a time. Same oil temp: 350F. 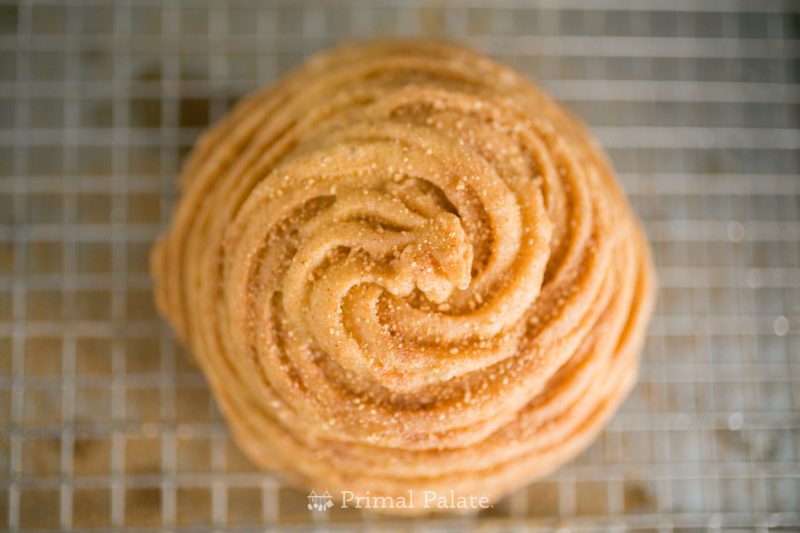 Once fried, hit them with a bunch of Primal Palate Cinnamon Sugar Cookie blend. 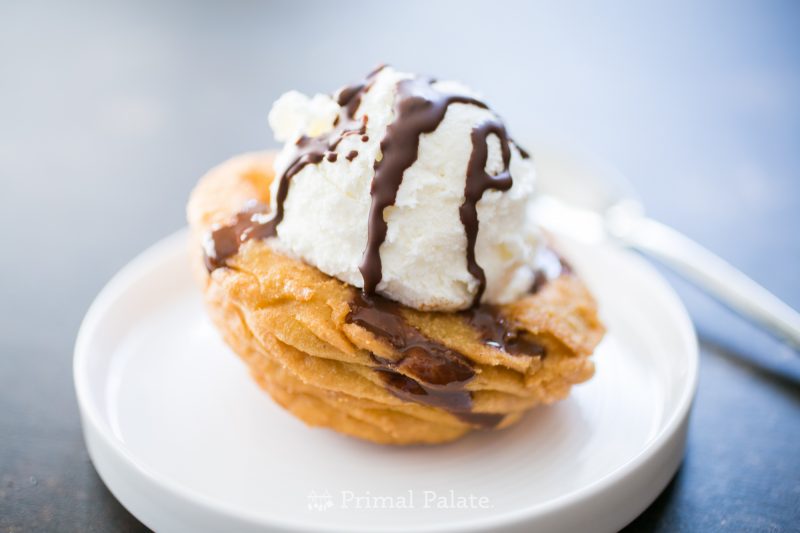 Add a scoop of ice cream, and drizzle a little chocolate ganache (a mix of melted dark chocolate chips and palm shortening). Then DIG IN!

Hope you guys love this recipe! We’re really excited to have Cinnamon Sugar Cookie BACK in the Primal Palate Organic Spices lineup, and this is the PERFECT recipe to try it with!

These churros are SO easy to make at home, you'll want to make them as treats daily. Based on the same "choux" type batter from French cuisine (which is the basis for another favorite: funnel cakes), this tasty treat is crispy on the outside, soft and fluffy on the inside, and can carry a variety of flavors. Churros are a beloved snack and treat all over the world, though they take on many flavor variations. Cinnamon-sugar coated Churros are a primarily American treat.

This recipe yields about 20 5-6" churros, or enough batter to make about 10 ice cream cups (molded on standard muffin tins). 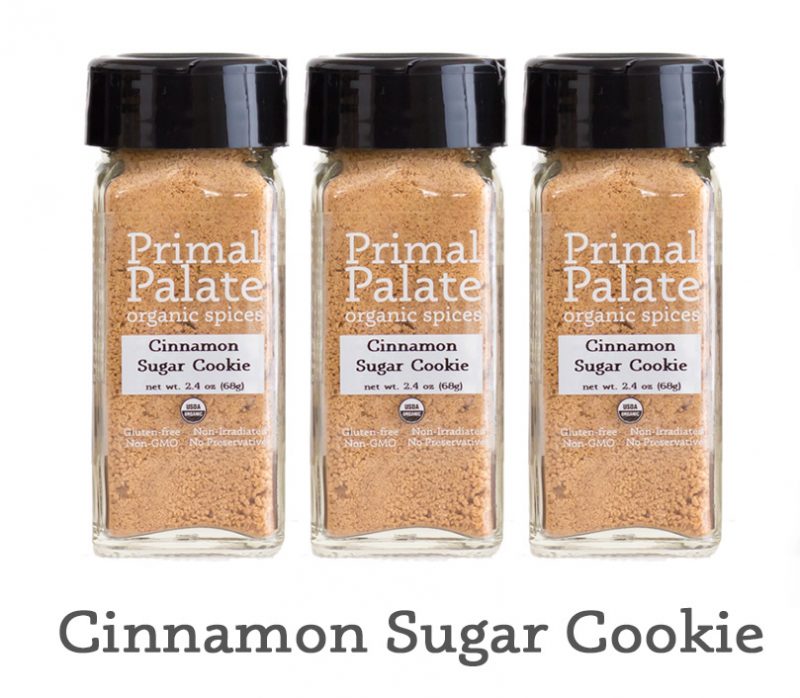