Paleo and FODMAPs (with a list of FODMAP foods)

Posted July 19, 2011 by Bill
Hey all – Bill here. I thought I’d share some of my experiences over the last year. Over a year ago, I made a commitment to Hayley and to myself to take charge of my diet. At the time, I didn’t think I needed change. After all, I was muscular and could run a 6 minute mile, bench press well over my body weight – by conventional metrics, I was doing well. A year later, its fun to look back on the old me, and I’m glad I left that guy behind.
We started the blog a few short weeks after I went Paleo. Hayley had been already eating that way for quite a while, so in the beginning I was sort of just along for the ride. But hey, I knew how to use a computer and a camera – what could be so hard about building a website? (… and a facebook page, and a twitter account, and a youtube page…. haha) I learned the Primal lifestyle as we went along. Things immediately began to change for me. My starting weight was 165 at 5’9”. Within 6 weeks, I was down to 150. Things looked better, so I was a happy guy.
Over the last year I’ve gone through so many Paleo phases, some of the earlier ones definitely need an asterisk to follow it. The first two months were a replacement phase of sorts. Larabars were my best friend. If I got hungry, I grabbed one (much to Hayley’s chagrin – she knew they were clean, but far from optimal fuel). It wasn’t even the healthier ones, it was those Jocolat ones. Full disclosure people. Handful after handful of almonds. Fruit all the time. Apples with almond butter. Paleo treats (when Hayley would make them). I’m embarrassed now, but I suppose this is part of the healing process. Oh yeah, and I was still enjoying the occasional adult beverage, too. Like I said… Paleo* in some of my earlier days.
Throughout the fall, I cleaned up my personal version of Paleo. In September, we both did a month of eating clean (whole30-style) and we were feeling AMAZING by the end. Quite possible the best I’ve ever felt. Then in October we started thinking about harvest treats (pumpkin loaf, cookies, and pumpkin pie). Being the guy behind the camera, in our case, is synonymous with being the taste tester too. Hayley shows a hell of a lot of restraint when it comes to the treats on the blog. I knew no such restraint at the time, and used to kid myself, ‘Hey, someone has to taste this to see if it’s good.’ While true, it was my fall back position for justifying a little too much indulgence.
The Holidays were surprisingly solid for us. We both played big roles in our families’ holiday dinners, so there were always plenty of grain free options. Around the first of the year, we renewed our commitment to eating right. Hayley gave up gum – something that she is still going strong with! We worked out more often to overcome the winter blues, and started working much harder with the website. Check out the triple-header of meals we made for the Crossfit Love 30 day challenge. This one really felt like a breakthrough for us. It wasn’t more than a few weeks later we totally revamped our logo to its current form.
While things were going better all around, there was a monster lurking around the corner for me. Things in my GI tract seemed to be changing. I had eliminated most nuts from my diet, and started reserving Larabars as emergency-only food. My diet was cleaner than ever before, and my version of Paleo certainly did not need an asterisk. Why were things feeling worse in my gut? I carried on, and chalked it up to perhaps the laxative effect of eating too much fat.
In the spring and early summer, things got out of control quickly. My gut turned into a proverbial meat grinder (sorry if this is too much info, but I’m sure you get the point by now). I couldn’t find a pattern to my gut issues. One day I’d eat high fat and have issues, the next day I’d eat lower fat and have issues. I’d have problems with vegetables, problems with onions, problems with coconut products (but only some), problems with just about everything. One day, I finally confessed to Hayley that I was having problems; she suggested that I keep a food journal. While the few previous foods stuck out, there was a scary inconsistency showing up in the journal. Perhaps there was something really wrong with me – did I need to see a doctor?
With a great stroke of luck, Hayley was reading Crystal Nelson’s blog and she found an old entry on FODMAPS. No, I’m not emphasizing a poorly spelled word. What does FODMAP stand for? To directly quote the very wise Kurt Harris:

FODMAPS are a group of carbohydrates that have in common that they are poorly absorbed (malabsorbed) in the small bowel, but can serve as a feedstock for our colonic bacteria. FODMAP stands for fermentable – oligo- di- and monosaccharides and polyols. And fermentation means that bacteria or fungi can anaerobically digest the substance in our colons.

You can read Kurt’s entire write up on FODMAPS here. In addition, Crystal quotes HealthHype.com, expanding on the definition with health effects:

So when an intolerant individual eats a FODMAP food, they experience severe discomfort, bloating, and sudden onset diarrhea. Swell. What are FODMAP foods, anyway? Well, they are short chain carbohydrates. Unfortunately, this isn’t as easy to simply identify as, say, Grains, or Dairy. The FODMAP foods span all the food groups!

Here are all the foods you should avoid if you suspect you are averse to FODMAPS. 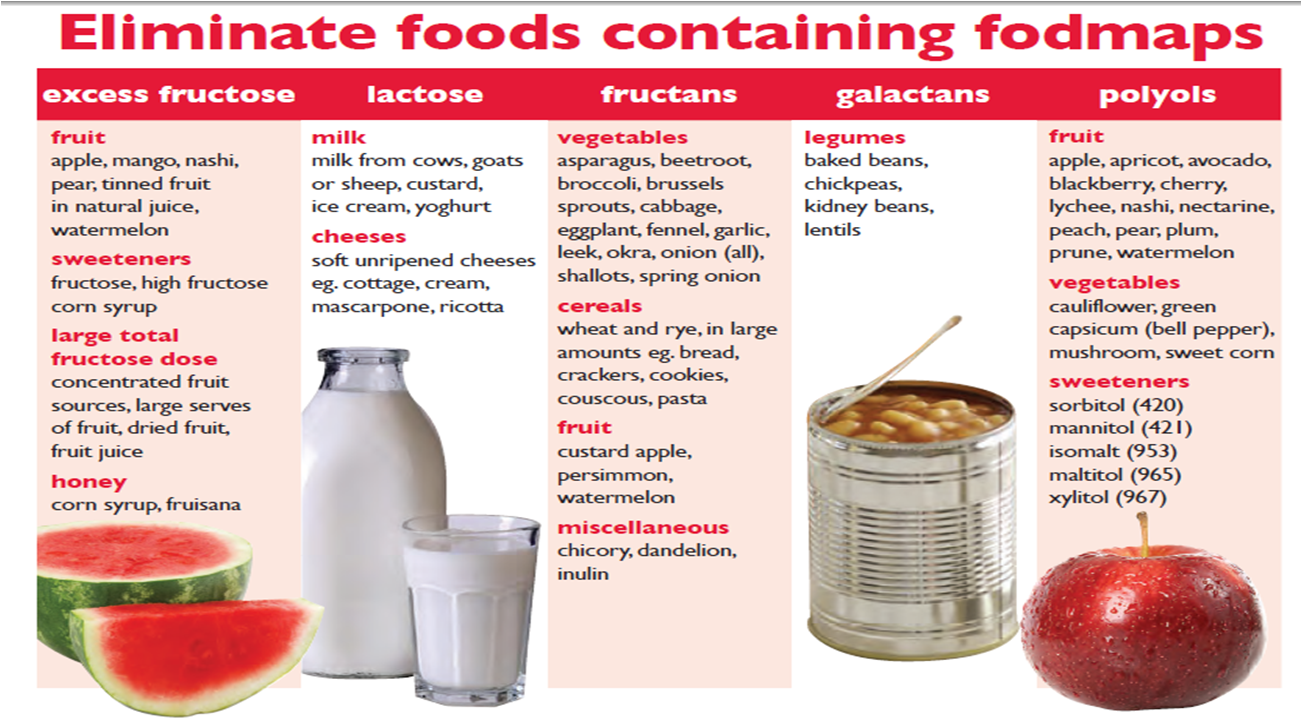 [Image courtesy of The Irritable Bowel Blog]
As you can see, this might cause some SERIOUS problems for someone enjoying a typical paleo diet. To start off, nearly every night Hayley and I were enjoying roasted Brussels sprouts, asparagus, broccoli, or something with onions and garlic with dinner. Onions are pretty much my favorite vegetable, and they were killing me. Garlic – killing me, too. Coconut milk – instant trip to the water closet. Avocados, apples, mangoes, mushrooms, cherries, beets, cabbage, eggplant….. ugh, I was eating them all! In addition to all that, I was eating full fat greek yogurt with cut up fruit in it (usually mango). And to think, I was always blaming my gut issues on the yogurt, when in reality it was because of the mango I so often added.
So, a little over a week ago I cut all of them out. In addition, I also took the initiative to go one step further and employ good food combining practices. My version of this places particular emphasis on avoiding the consumption of fruit with other foods. If I eat fruit, it is first thing in the morning (which is seldom), or more likely as a midday snack. To be safe, if fruit is consumed in the middle of the day, it must be 2 hours after lunch and 1 hour before dinner. I’ve also been sticking to “safe” fruits. For me, this is cantaloupe and blueberries.
At first, I wondered how I could go on without my beloved roasted vegetables with dinner. It was indeed a stark change for me, but we’ve both shifted gears with our idea of the typical dinner. We are now eating protein paired with a nice large (FODMAP-free) salad. Big, crisp caesar salads with romaine and homemade caesar dressing (recipe coming soon). Yes, these salads even have some anchovies. Legit. Or we will enjoy taco salads – mountains of spring greens with some bell peppers, tomatoes, carrots, seasoned beef, a small amount of avocado (of which I am blissfully tolerant), and copious amounts of cilantro. A squeeze of lemon and drizzle of olive oil brings this salad to flavor bliss.
Hayley has been my saving grace. Not only did she figure out what was wrong with me, but she also has been selflessly helping me get well too. Everyone should be so lucky in life to have a true partnership, as we do. I love this girl so much. As of right now, I’m early in the trial phase of eliminating these foods. I’m already finding that I’m more tolerant of some (avocado, garlic) than others (onion, coconut milk, cabbage). Some are still borderline (asparagus, broccoli, brussels sprouts), which I will abstain from eating for 30 days. After this initial month has passed, I’ll reintroduce some of the borderline foods to see which I can tolerate and which have me running for the bathroom.
Anyway, so thats the scoop with the man behind the camera. The moral of the story is that even if you are following a strict Paleo diet, there still might be room for fine tuning. Unfortunately, sometimes it takes more than simply eliminating grains to have a happy gut. I’ll keep you all posted as I continue on into year 2 of eating Paleo. There are some great things ahead! Thanks, as always, for following.
« Previous post
Next post »