Hi Friends, We’re excited to bring you a fun interview and giveaway today. A few months back while we were at Paleo Fx in Austin, we had the opportunity to chat with some of our favorite people. Pete (from Pete’s Paleo) definitely falls into rank as one of the coolest people to talk to about Paleo cooking. A seasoned chef, Pete has built a hugely successful Paleo meal delivery business based out of sunny San Diego. Pete’s Paleo aims to make clean paleo eating accessible to those that might not know where to start in the kitchen (or might not have time to cook). Similarly, his new cookbook, which he co-authored with his wife and photographer Sarah, seeks to accomplish the same mission – to make Paleo eating delicious and accessible for anyone. 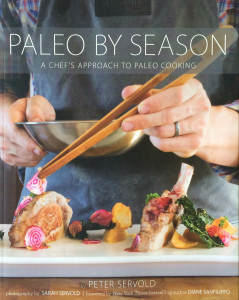 What’s different about Paleo by Season?

With so many new Paleo cookbooks on the market, that seems to be the million dollar question. What sets this book apart from others? Well to start, Pete is a classically trained chef who studied at Le Cordon Bleu. In Paleo By Season, you’re going to be walked through how to cook your way through a CSA box. If you don’t have community supported agriculture (CSA) in your area, it’s all still relevant. Pete shows you how to take advantage of the best seasonal ingredients, just like a restaurant chef would. And finally, this cookbook comes at Paleo from the cuisine angle. Here are just some of the dishes you’re going to be inspired to make:

Those aren’t just offered up to pepper the book with fancy culinary terms. The hand picked dishes that Pete selected for this book were all thoughtfully chosen to provide recipes across multiple cuisines, skill levels, and taste preferences. Beginners won’t be overwhelmed (we promise), and people with serious cooking skills can skip right to the “full difficulty” recipes. It sounds cliche, but there really is something for everyone in this book. Beyond being a Paleo power couple, Pete and Sarah have also become good friends of ours over the last few years. We remember Diane (Sanfilippo) telling us “you’ll LOVE Pete and Sarah” and we thought “okay, they sound awesome, so probably.” We got to finally meet them at Paleo Fx 2013, and we all instantly clicked. Even if we weren’t good friends with them, we would still tout Paleo By Season as an impressive cookbook (because IT IS). They should be extremely proud of such a beautiful and comprehensive book. As we said, we had a chance to chat with Pete at Paleo Fx this past year about their new book. (Sorry about all the background noise in the video!)

We think Paleo By Season is one of the best Paleo cookbooks of the year so far – so if you are able to, you should consider ordering a copy. This book is sure to help sharpen your skills in the kitchen and break you out of any boring meal routines you might be suffering from. Paleo by Season is available now online and wherever books are sold.

>> Order Paleo By Season on Amazon <<

(or see other books we recommend in the Primal Palate Store)

To enter the giveaway, simply comment below with either:

– Your best tip for people trying to go Paleo, or

The prize up for grabs is a copy of Paleo By Season! We’ll run this giveaway until Friday, August 15 at 9pm EST. Winning entry will be chosen at random. Good luck!