Paleo and Iron Deficiency Anemia – PLUS a Meatloaf Recipe!

Disclaimer: This post is not meant to provide medical advice of any kind. I will not go into details about any supplements/prescriptions I am currently taking. I am still in the process of getting further blood work done, and will provide updates at that time. Until then, this is simply to provide encouragement for anyone going through a similar situation. Enjoy – Kara

Running has, and always will be, the first love of my life. I started running with my high school cross-country coach in the sixth grade, started Olympic lifting in the seventh grade, and did not break until I graduated college. Minus a three month period following foot surgery my senior year of college (when I swam every single day instead), I can confidently say I have not taken more than 1.5 weeks off running since I was eleven years old. 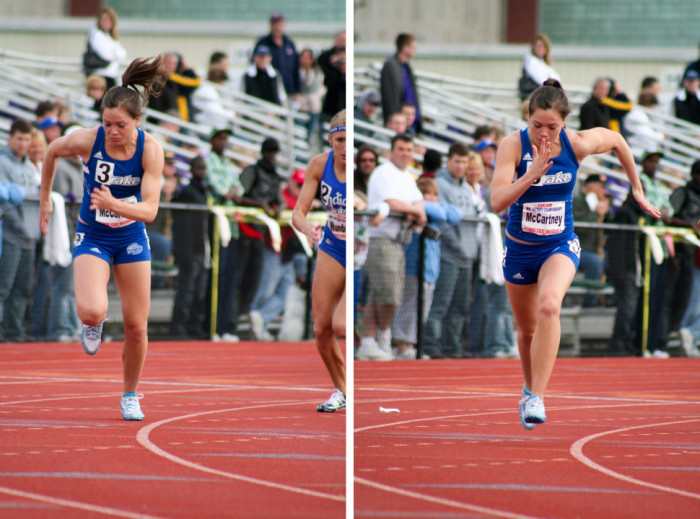 That is, until this year.

Last week I had twenty-one vials of blood taken from my right arm. Name a blood test, I guarantee I had it done. Vitamin B12 deficiency, Celiac Disease, Rheumatoid arthritis, Vitamin D deficiency; I was tested for it all. And as I was sitting there with a needle in my arm for a solid five minutes, I just looked at the nurse and said, “What if nothing’s wrong with me and I just turned into a total wimp when I graduated college?”

Around this time last year, I started feeling…not like myself. I had been working for Primal Palate for several months, sold my soul to the Paleo lifestyle, and loved everything about my new job and how I was fueling my body. But I felt TERRIBLE. There was only way I knew how to describe how I was feeling: bad. Running was agony, but I wasn’t injured. I was exhausted, but I wasn’t sleep deprived or sick. I just felt bad.

My training completely collapsed upon itself. I went from running 6-10 miles on a given day to barely getting through two. I quit going to my weekly running group because I couldn’t handle the practices. Every single day, I put on my ASICS and told myself “It’s all in your head. It’s all in your head,” and went outside to run. I made it three blocks before I had to stop and stretch.

Eventually I just gave up. I had no idea what was wrong with me, and couldn’t explain it to anyone else, so I just stopped. I picked up Crossfit for a few months, I went to yoga, and I lifted on my own. The few times I did attempt to run, all I could think was, “So THIS is why everyone hates running so much.”

After 3 or 4 months, I started feeling a little better. My runs increased from 2 miles to 4, to 8; until I finally hit 15 in February-the longest run of my life to date. I never did figure out what was wrong with me. I assumed the extreme fatigue I felt had been my “Paleo transition period,” while my body adjusted to burning fat instead of carbs for fuel. I also thought I had done Paleo “wrong.” As so many people who transition to Paleo tend to do, I was constantly snacking on trail mix, almonds, and walnuts to replace my former snack foods. I wasn’t eating any fermented foods or supplementing with gelatin to repair my stomach lining, and eating a lot of fruit to cover my sugar and carb cravings. Since I now knew the ins-and-outs of Paleo, I figured that was all in the past.

Which brings us back to me sitting in the doctor’s office last week.  After two frustrating months of training, I had finally booked an appointment. I knew two [extremely talented] runners who recently had blood work done. Both girls came back with low iron levels. 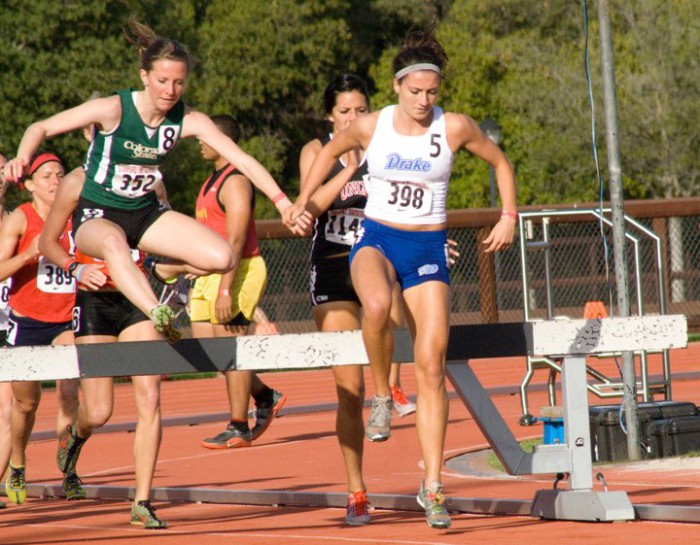 The first was my college teammate Casey, who I had recently seen for the first time in three years. I had flown home to Iowa to watch the Drake Relays, one of the largest track meets in the nation and my alma mater’s claim to fame. My former team captain greeted me by saying, “KARA! I’m on a gluten-free and dairy-free diet! I’m six days in!” 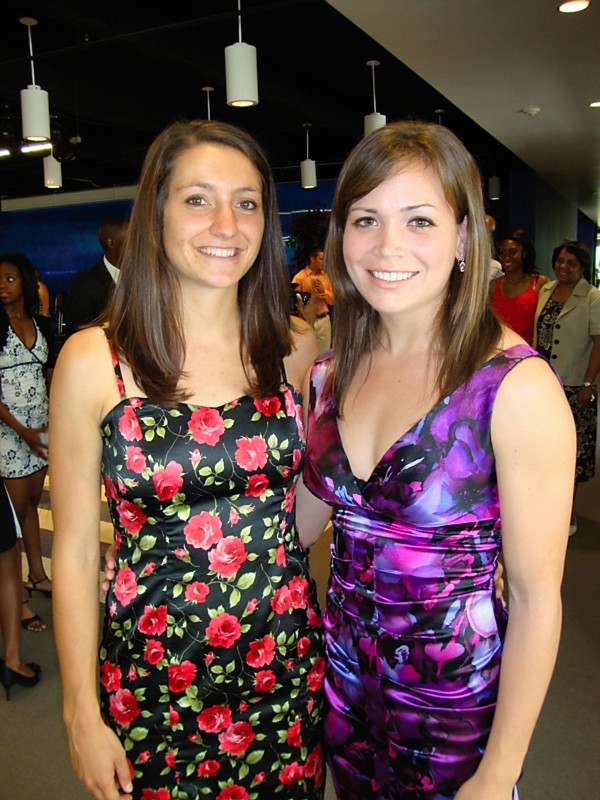 Welcome to the Paleo world, Case.

As a teammate, there are few people who I hold as much respect for as I do Casey. She always hit her mileage, she had a good attitude, she made sacrifices, and she was currently serving as a grad assistant coach. If she was willing to admit something was wrong with her body, there had to be something seriously wrong. “Basically my doctor told me my body is pissed at me. I’m not absorbing any iron,” she told me. She was sleeping 9-10.5 hours a night and still felt exhausted at work. “I felt so crappy for sleeping so much and thought I was getting lazy!” she said. When she finally went to get her iron levels checked, her results were so low her doctors considered giving her a blood transfusion.

The week after I spoke with Casey, I was back in Pennsylvania watching the Pittsburgh Marathon. At mile 5, I saw my friend Laura, who placed 1st for the entire state of Pennsylvania the year before, walking. In the opposite direction as the other runners. This is a girl who can run a 2:50 marathon. When I asked her what was going on, she told me she had signed up for the half, rather than the full.  “I just looked down at my watch and all I could think was ‘I’m not even running my marathon pace,’” she said, “So I dropped.” The next day she went to get blood work done. Result? Low iron. 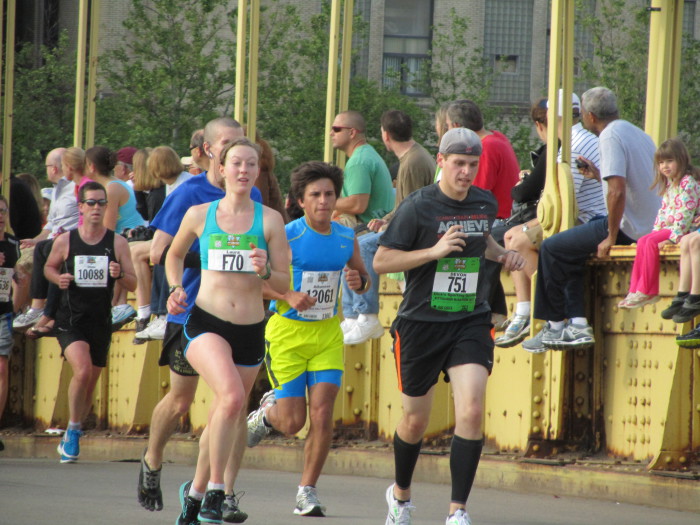 These two situations reminded me of a conversation I had the month prior. I was running on the track with a friend, but cut the workout after 800 meters. Her boyfriend had been calling out our splits, and said, “Maybe you have low iron. But..don’t you eat a lot of meat?”

Which was just it. There was no way I could be anemic. Laura was a vegetarian, and since red meat is the most iron-rich food, her results weren’t that surprising. Casey was prescribed a diet which I had been eating for over a YEAR to help her body absorb iron.

Yet, twenty-one vials of blood later, I was diagnosed with classic iron-deficiency anemia.

Not only was I anemic, but my results were so low, I had to come back a week later and re-test. I’ll go back for round #3 on Monday. According to the NIH, normal iron levels range from 60-170 mcg/dL (micrograms per deciliter). An iron level of 41 caused Laura to drop out of the marathon. Mine was 10. My ferritin levels (a protein that helps store iron) was 2. The percent iron saturation in my body was also 2.

“You don’t have Celiac disease, your Vitamin D levels are awesome, you don’t have cancer…” my doctor told me over the phone, “And then we get to your hemoglobin and that’s when everything goes to hell.” Hemoglobin carries oxygen throughout the body and needs iron to function. My hemoglobin was 8.8. Dropping to 8.0 requires a blood transfusion.

I’m not going to say I was happy to hear the words “blood transfusion” being thrown around, but it was far from my worst-case scenario.

My worst case scenario would be having every last one of those tests come back negative. While I was waiting for my results to come in, I was at Laura’s house watching her make dinner. A vegetarian since 2008, she was making liver and onions in attempt to boost her iron levels. It was pretty epic, to say the least. After not eating meat in six years, her first experience back to the carnivore side just had to be organ meats. What a champ.

I told Laura exactly what was running through my head. My worst fear was that I had lost all mental toughness, and made up the entire ordeal in my head. She had been thinking the same thing just two weeks before. “Kara, do you know how many times I told myself, ‘No. You are RUNNING this marathon. There is nothing wrong with you. It’s just mind over matter. Mind over matter; that’s all it comes down to.’ And then I dropped at 5 miles.”

I used to have these crazy dreams where I would be running a race, but my body could not physically move. I would literally be clawing at the air trying to get momentum, or be on all fours digging into the ground trying to move forward. THAT’S what running with anemia feels like. I’m with Laura in saying ‘mind over matter’. I truly believe that no one, whether they be a runner, Crossfitter, swimmer, etc; would ever have done anything great had they given up at the first sign of pain. But there is a very fine line between winning a mental battle, and acknowledging when something is SERIOUSLY wrong with your body. Had I listened to mine a year go, I might have this all resolved by now.

It is still “TBD” on how or why I became anemic. I believe food lies at the root of every ailment and/or cure, so I have my own speculations on why my body won’t absorb iron. Directly on my prescription it reads, “Certain foods, i.e. eggs, whole grains, cereal, dairy coffee, and tea may decrease iron absorption.” Also, after reading this article by Chris Kresser, I know nuts contain higher levels of phytic acid than grains. In fact, nuts prevent iron absorption MORE than white bread. Until I know more, nuts are being completely erased from my diet. As more tests come in, I promise I’ll keep everyone updated on the cause.

I love when someone pushes themselves to their limit. I think that’s what makes sports so awesome. But in order to get to that limit, everything has to run perfectly first. If the hardest thing for you to do is accept the possibility that there is something wrong, then there probably is. At which point you have a choice: you can fight the mental battle and reach your limit at that point in time; or you can fix the problem, and find out what your REAL limit really is.

And to make sure all of you are boosting YOUR iron levels, go home and make this Meatloaf filled with organ meats, from The 30 Day Guide to Paleo Cooking!