Our Mediterranean Cruise (Part 1 of 5)

Hey everyone! We have been sitting on these posts for almost 10 months now, and thought it might be time to share them finally! We are still very much in “recovery” mode, so what better time than now to relive some happy vacation memories? The thing thats so special about this trip (you’re about to spend the next 5 days reading about), is that our travels last year inspired A LOT of recipes in our new cookbook, Make It Paleo 2! If you haven’t gotten a copy yet, it’s available online, as well as Barnes & Noble and Costco stores too!

Around this time  TWO years ago, we signed up for a Mediterranean cruise with Bill’s family. It was pretty hard to be REALLY excited for it at that point, because we were in the last two months of wedding planning, which was quite a stressful time for us. 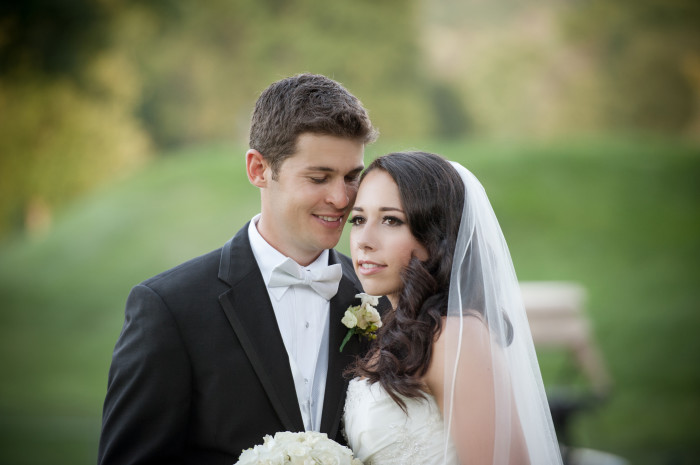 After the wedding had come and gone, we were able to really start getting geared up for our trip. This trip was even more exciting for me, because it would be my very first time in Europe! Bill lived in Rome in college, and he and his family have visited Italy many times, but this would be everyone’s first time in Greece and Turkey. Well, not everyone… joining us on the trip were “Magistra” (the Latin word for “teacher”) and “Brutus”… Bill and his sister’s high school Latin teacher and her husband – who also go by Marianne and Ed.

Marianne started as Bill and Nellie’s Latin teacher, but she and Ed quickly became what we’d all consider to be family members, and best buds with Bill’s parents. Many trips Bill’s parents go on is an adventure with Ed and Marianne. They are quite the adorable group; like peas in a pod. And if you have ever traveled with Marianne, you know it’s a smart thing to keep doing. She knows pretty much everything there is to know about ancient Roman and Greek history, and she can speak several languages (and if she can’t, then she sure makes it seem like she can.) Plus, she’s just a wonderful woman that works her way into the hearts of everyone she meets. I hope I can remember everything she taught me on this trip, but if I forget then I can just relearn the next time, because there WILL be a next time. 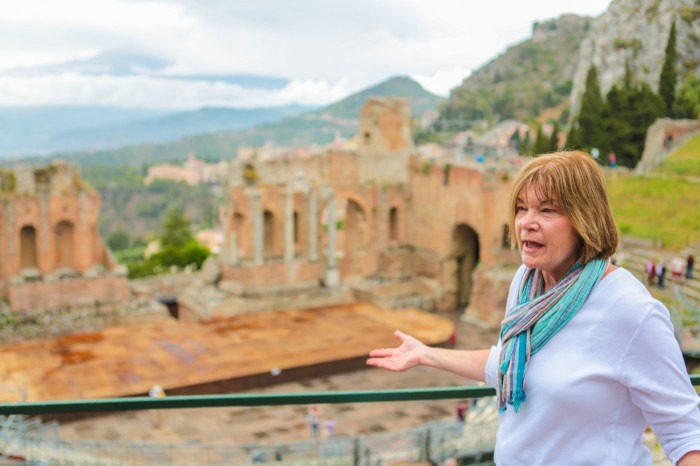 (Here’s Marianne in her element, giving an impromptu lecture at the Greek Theater in Taormina, Sicily)

We started our journey in Paris, which in theory was a great idea, but in reality-not so much. NEVER, EVER plan a touring day for the day you arrive in Europe. At least not if you have an 8+ hour flight there. We took a red eye, direct flight from Pittsburgh to Paris, and arrived at 8:30 am (which was 2:30 am Pittsburgh time), and were pretty much zombies the whole time we were there. On the bright side, we were able to meet up with our great friend (and occasional stylist) Sam, who was spending a few weeks in London. She hopped a train, and made her way through the Chunnel to see us in Paris! What a great surprise! 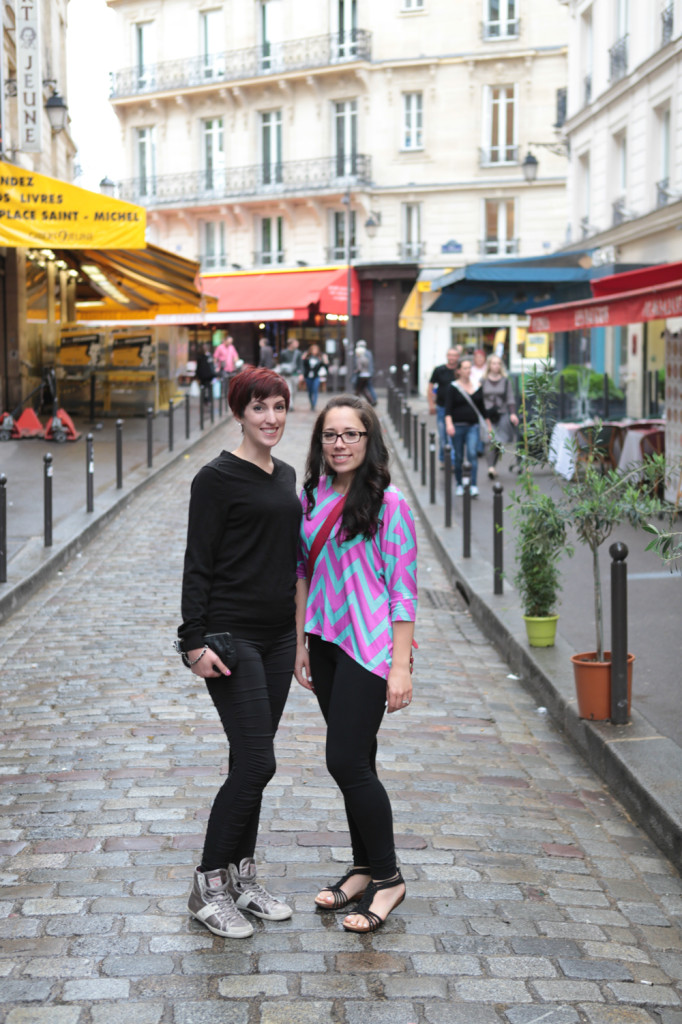 (Hayley and Sam in the Latin Quarter in Paris)

After getting a meal and reviving a little bit, we headed over to Notre Dame which was close by. I felt like I was in a dream walking through Notre Dame, and unfortunately not in a good way. I did still manage to enjoy Notre Dame though. It was absolutely breathtaking, and I had to keep pinching myself (to stay awake and believe that I was really there!) 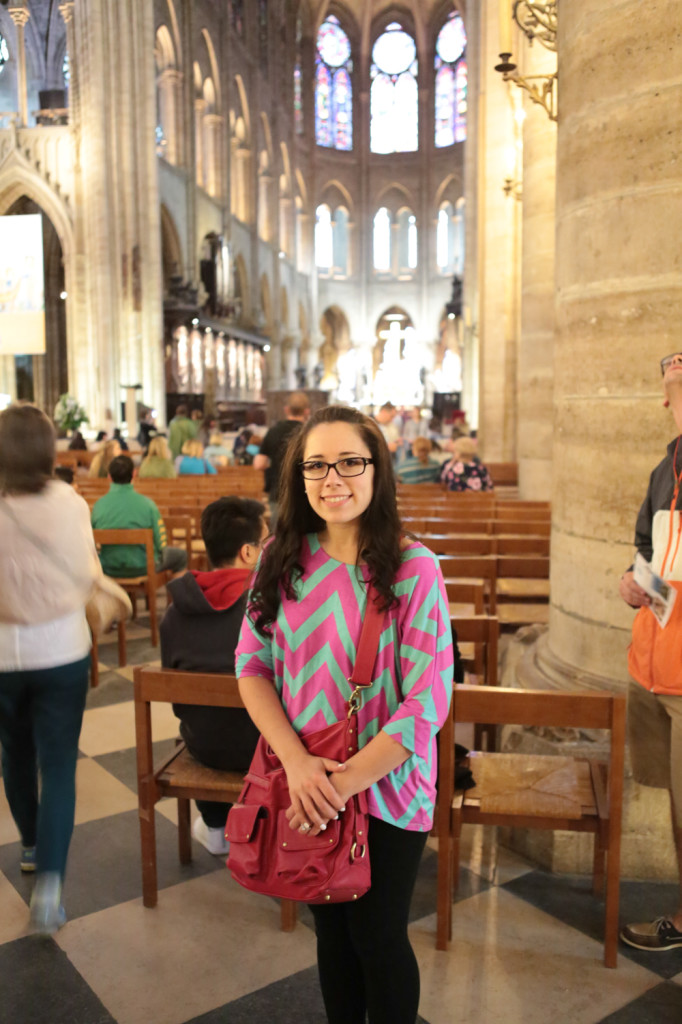 Sadly that was the only sight we were able to see while we were there because the weather was pretty dismal; cold and rainy… not what you want for touring a foreign city on foot! Our brief stay in Paris was also spoiled by a few people that were very, very rude to us. I wont go into too much detail on that because this is supposed to be a happy post, but I will say that it doesn’t matter how nice you are to (some of) the locals-if you don’t eat bread, you are NOT understood, or even welcome in this particular case. The only place in Paris we were treated well was at a local gluten-free pastry shop, Helmut Newcake. 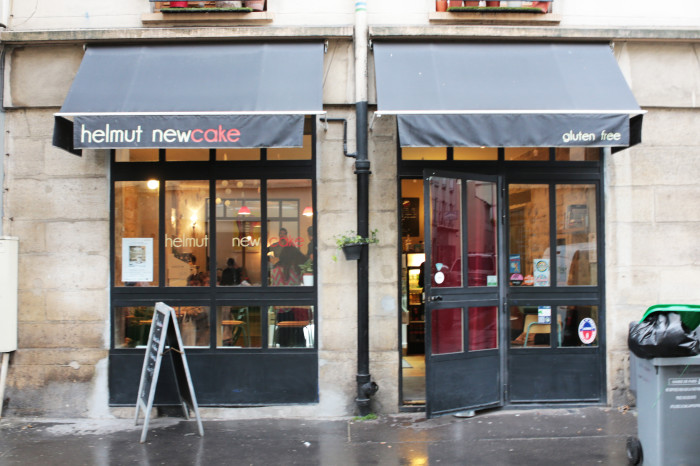 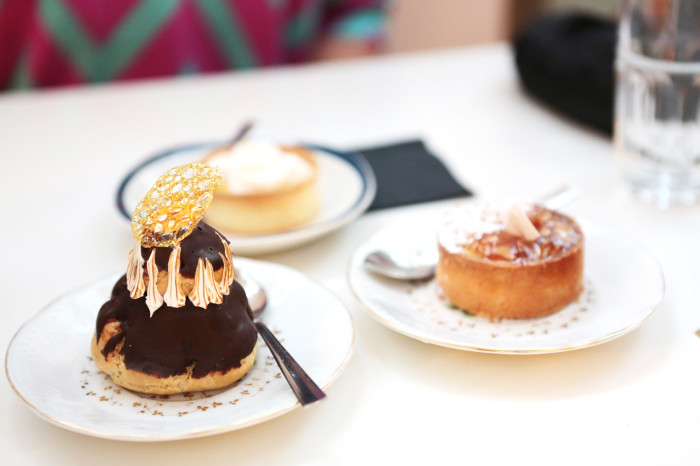 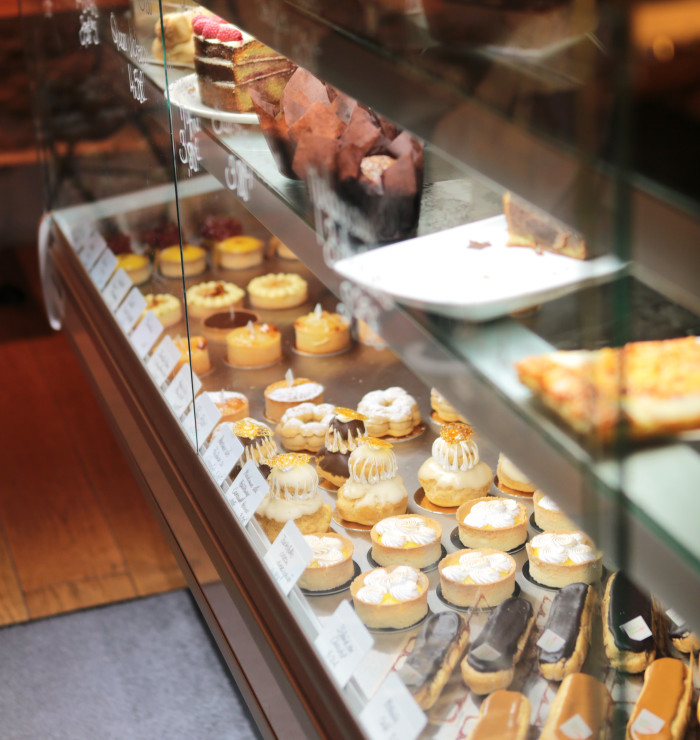 I don’t know how that place stays in business because none of the locals understood what being gluten-free was, even when we showed them the explanation written in french, but it’s there, and the desserts are delicious! I do wish we would have had a better time in Paris (and perhaps a few more days to get over the jet lag), but sadly we did not, and I think it will take a lot of effort to make me want to go back one day….

The next stop on our adventure was Rome, because our cruise ship was leaving out of the nearby port city, Civitavecchia. We spent a day in Rome seeing the sights, guided by Magistra, which was so fabulous! It was a very fast paced tour, seeing all the highlights in Rome. Lots of walking, and lots of  “OH MY GOODNESS”, and lots of REALLY nice Roman people, and lots of REALLY GOOD FOOD. Plus Gelato. That became a regular thing for me, found on Facebook and Instagram under the hashtag, #GelatoEveryDay. 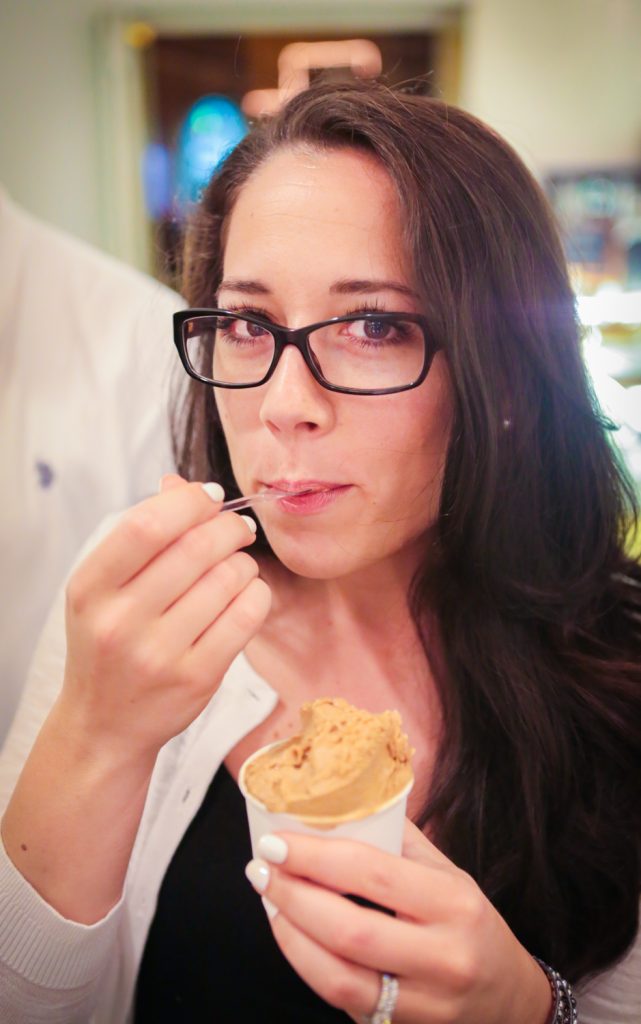 Now I will turn this post over to Bill, because being that he lived in Rome, he can better explain what we did, plus my brain hurts from trying to remember everything-not to mention express it in writing, so I need a break.

Hi Everyone!  We had a wonderful time in Rome seeing all the typical sights that everyone sees (though usually over the course of a few days or a week, not a single DAY). We started off our day with a tour of the Vatican Museum, with the goal of seeing the Sistine Chapel. It was super crowded, so we followed what Rick Steves recommends and sort of snuck around some of the lines with a tour group (pro tip). We continued on into St. Peter’s Basilica, and enjoyed the breathtaking church in all it’s glory! The weather was perfect on our day of touring Rome, so we left the Vatican and headed East across the river into the center of the Eternal city. 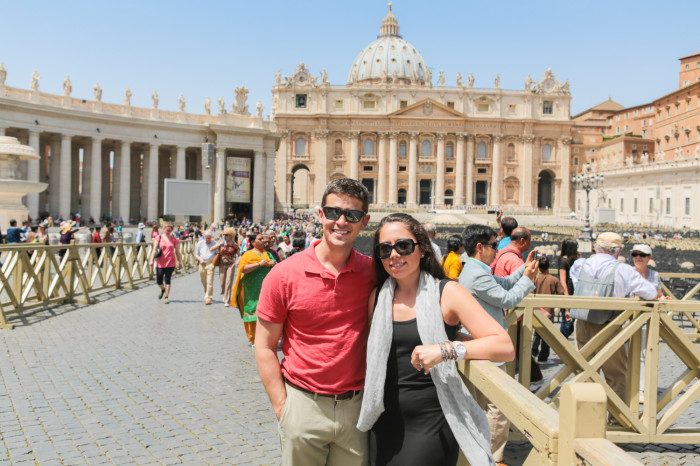 We realized that we would need to get across town quickly and work backwards toward our apartments near Piazza Navona, so we hopped in two separate cabs, and they took us down to the Colosseum. Rome happens to be Magistra’s favorite place in the world, so she was happy to play tour guide all day long! Here we are (below) at the Colosseum, hearing about the naval battles, canvas roof, gladiator fights, and hunting events. 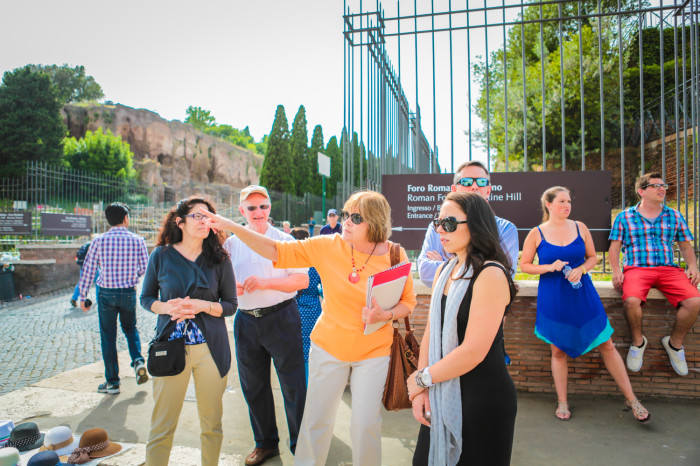 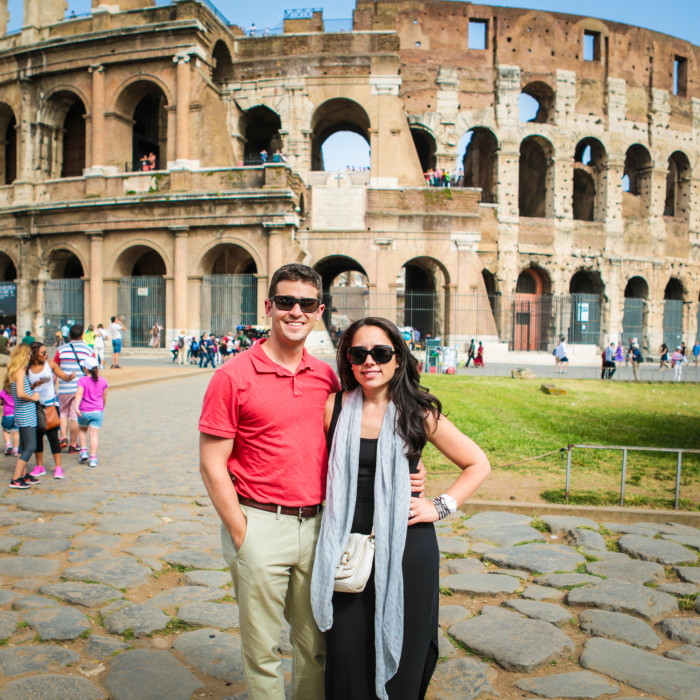 There’s a photo of me standing a few feet away from this very spot about 8 years ago when I lived here. It was a great time of my life. I learned to paint, and also learned how to enjoy a slow pace of life (and find a great cappuccino). 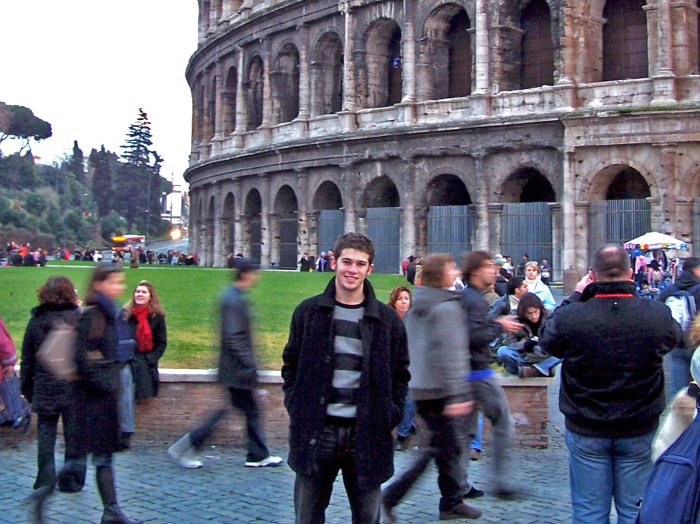 We started at the Colosseum and worked our way back to Piazza Navona by way of the Roman Forum, also making a stop at the Pantheon (my absolute favorite thing to see in Rome!) We visited a print shop next to the Pantheon and we picked up a print of the Nolli Map – one of the most revered maps of Rome! Normally, getting a map framed wouldn’t really be my kind of thing – except using the Nolli Map for urban design studies was a mainstay of my Landscape Architecture program while I was studying in Rome. It’s sentimental to me. (And in the time since we wrote this post, we DID get it framed!) 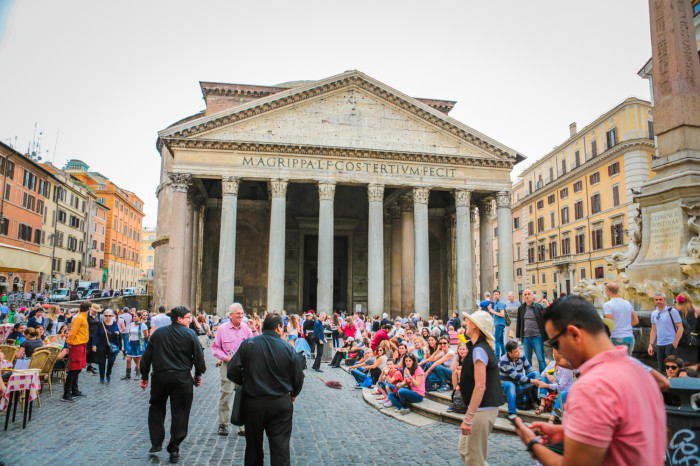 After walking all over Rome, we wanted to find food close to the apartment – so we took a short walk over to Campo Dei Fiori and found a nice little seafood place called Maranega. Being right on the Campo, it’s a little toursity – but who were we kidding – we were tourists and wanted to sit and people watch while we ate. 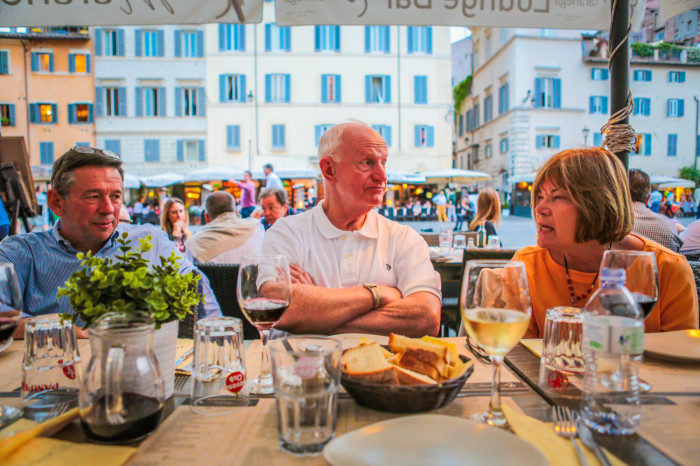 One of the things we found about being in Rome was that (unlike in Paris) the Italians really understood the concept of gluten-free eating. In fact, Celiac Disease seems to be even more prevalent there (or well known) than in most parts of the United States. We had absolutely no problem communicating our dietary needs to anyone in Rome, even with a slight language barrier. 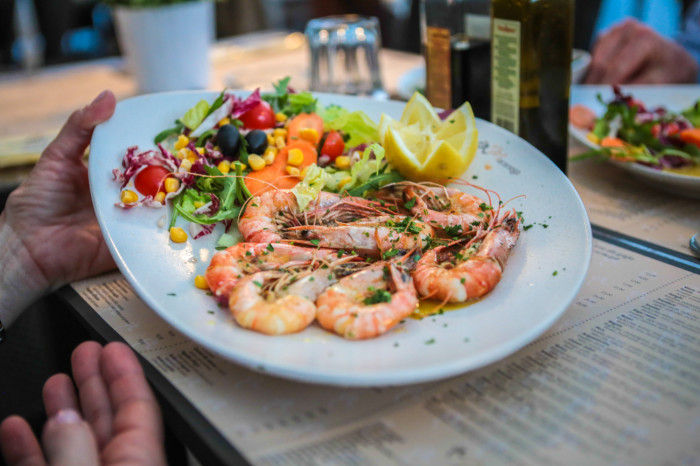 There’s so much more to tell, so come back tomorrow for part 2 of 5! We will be posting about our trip every day this week! Cheers,