We love butter, and cook with it often. Bill and I both tolerate grass fed butter just fine, and really enjoy incorporating it into our diets. Up until now, we have always purchased Kerrygold or Smjor butter from Whole Foods. Living in Pennsylvania, we can legally buy raw milk at our local food coop, or straight from a farmer. Unfortunately our coop does not carry raw cream, or butter, just milk, so grass fed butter was as close to the “really good stuff” that we could get. For those of frightened of raw milk, fret not. This food is a good one. The milk we find today in our grocery stores is heavily processed for good reason. It comes from factory farmed cows, who are fat and sick from being fed an improper diet. Sick cows means sick milk, in which case the milk from unhealthy cows needs to be heated or “pasteurized” to kill all of the bacteria growing in the milk of those poor, unhealthy cows. The common milk we find in most grocery stores today is a dead food, that causes all of the intestinal upset that we know it to cause.

Raw milk on the other hand is full of live, beneficial bacteria. Milk is a live food, and can be safely incorporated into a Paleo/Primal/and especially Weston A. Price diet when sourced from a good farmer who grass feeds and grass finishes his cows. These cows are healthy and happy, and their milk will be healthy and happy too! For more information on the benefits of raw milk, click here, here, and  here. All of that in mind, personally I (Hayley) HATE milk. I don’t have any intentions of feeding our children cows milk, and I never drank the stuff growing up. Watching someone else drink milk makes me feel like I’m going to gag (which you can imagine was fun at the Weston A. Price conference when everyone was drinking that stuff like water). So, milk I hate, but cream, butter, cheese, and ice cream I LOVE. Just give me the fat I guess!

Bill does really like milk, but doesn’t crave it. He really loved the raw milk he tasted at WAP, but hasn’t asked for it since. He does seem to tolerate it okay (no gas, bloating, breakouts, emotional responses, etc) so my desire to get my hands on some raw butter was finally awarded by Bill being willing to drink the milk we had to buy to get some raw cream. We headed to our food coop to grab a few groceries, and while we were there we got a gallon of raw milk. Looking back on it, we probably could have settled for a half gallon, just because Bill doesn’t drink the stuff much, and based on how much cream I was able to skim off the top, we didn’t need to buy that much milk.

After we got the milk, we came home and both starred blankly at the gallon, wondering how we were going to get the cream out. First we thought maybe we could pour it out, and after starting to pour we realized that wasn’t going to work, so we poured a good bit into a glass container, and put that in the fridge to separate over night. The next morning we had what looked to be a good layer of cream in the glass container, as well as in the gallon jug again. I watched a few videos on how to skim the raw cream, and one that looked easy enough used a turkey baster. Off we went to buy a turkey baster (nope, we didn’t have one–we are still a young couple folks and despite having some pretty cool kitchen gadgets, there are some things we just don’t have yet–like turkey basters.) Anyway, we got what we needed, and headed back home to make some butter.

First thing we did was get all of our ingredients: food processor, a few glass bowls, the milk of course, some cheese cloth, and the turkey baster. Then we skimmed as much of the cream off of the milk as we could. This was slightly stressful for me, because I felt like I kept getting milk in the bowl, and the line of cream seemed to never go down.

(can you see the faint line of separation between cream and milk? it was even harder to see in real life!)

After we skimmed what we thought was a good amount of cream off of the milk (enough to cover the blades of the food processor), we poured the cream into the food processor and started to blend. We blended for several minutes, and thought nothing was going to happen except milk bubbles. At that point I got on Facebook chat with one of our favorite farmers and she gave me some tips.

1. The cream takes a really long time to whip.

2. It whips faster at room temperature.

Since I’m impatient and we had cold milk, you can see where the worry came from. After a few more minutes the cream started to thicken and I got really, really excited! 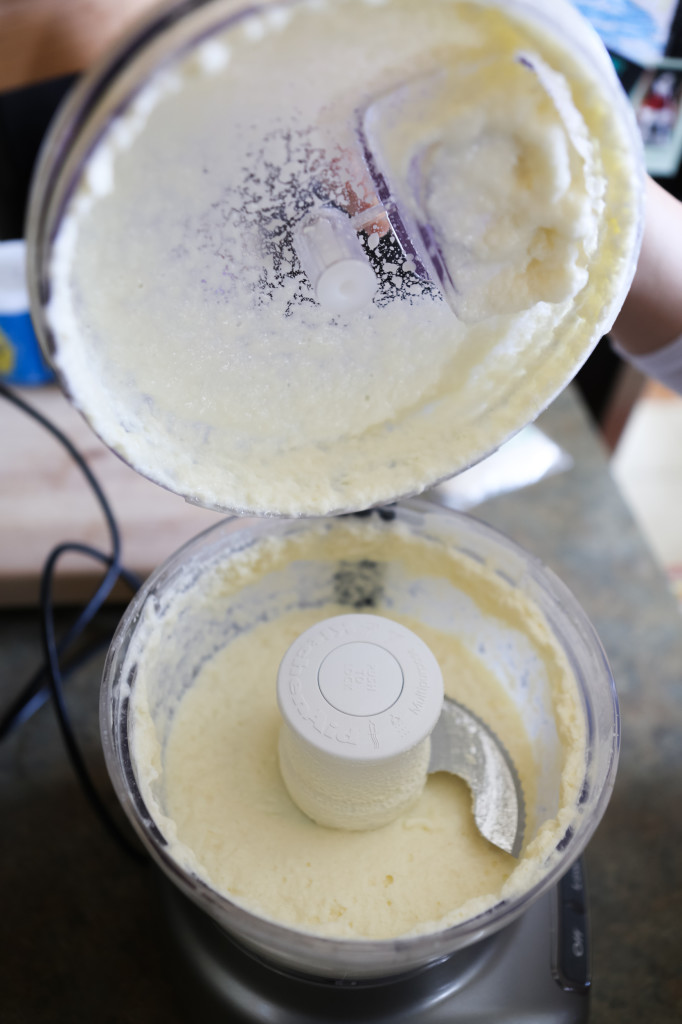 After a few MORE minutes the cream started to really thicken, turn yellow, and separate from the buttermilk. Once it did this, we poured the butter milk into the sink, scraped the butter back down onto the blades, and kept blending. 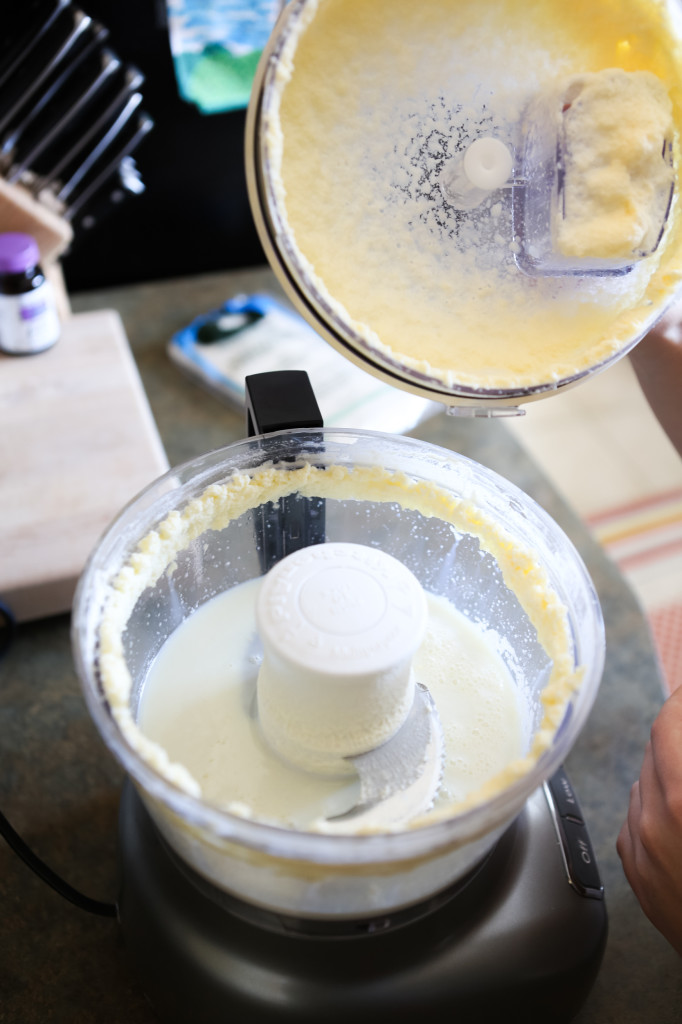 Finally we had a cute little ball of butter that we could strain into a bowl.

We strained the remaining buttermilk from the butter through our cheese cloth. 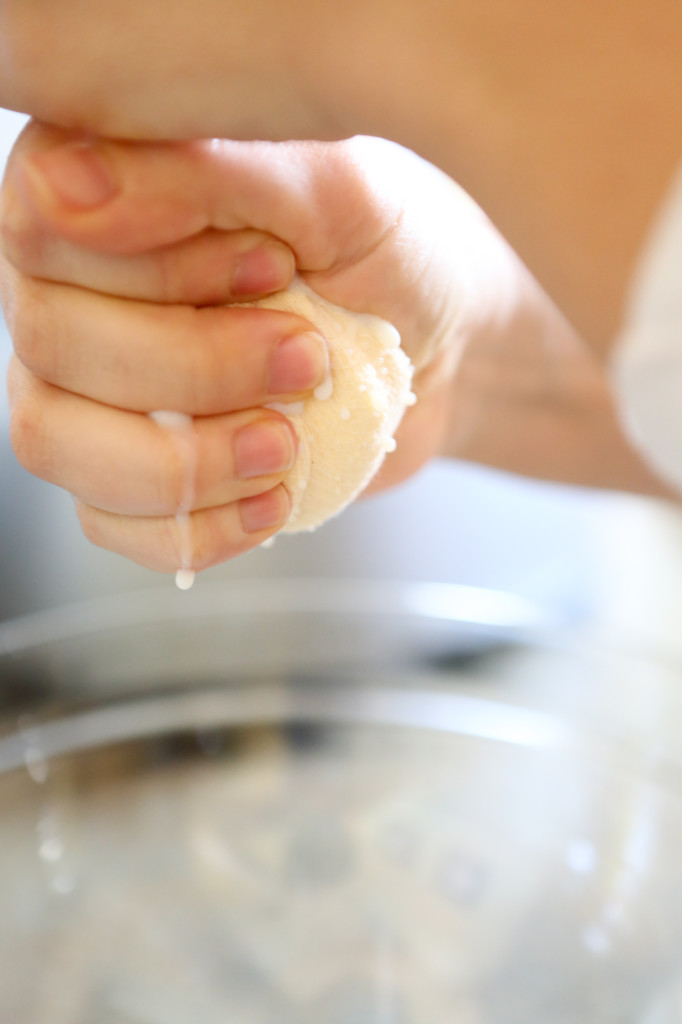 After that we had butter!! Woot!! 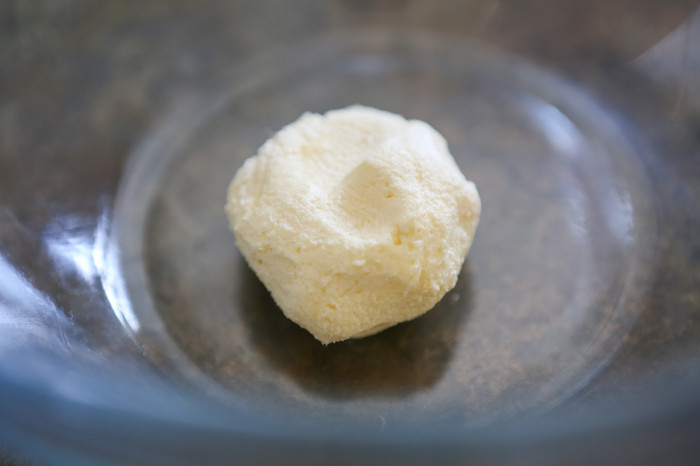 1. Skimming cream from milk is a pain, and results in more buttermilk and less butter (or I just suck at it, which is a huge possibility).

3. Making butter is really fun, even though it’s a lot of work.

I really enjoyed making this butter. Before making butter from raw cream yourself, I would definitely recommend watching The Healthy Home Economist’s video tutorial on how to make raw butter. She does a fantastic job with this video!