Glandular Fever, CFS, Insomnia, and Paleo as a Cure

For the past month, we have shared with you many of the Paleo “Success Stories,” from The 30 Day Guide to Paleo Cooking.  But one thing we have always said, and what we firmly believe, is that Paleo impacts much more than just numbers on a scale.  From allergies to brain fog to acne, Paleo has been known to treat symptoms as well or better than prescriptions.  Bill and Hayley have shared how Paleo has helped them treat their own leaky gut and thyroid issues.  We are happy to have this guest post from Kathy, (whose symptoms were too  extensive to fit inside a reasonable title.) After suffering from Grandular Fever and running on “20 percent on a good day” for three years, it took a mere THREE MONTHS on Paleo to cure what endless doctors visits couldn’t.  Thanks Kathy for sharing your story!-Kara 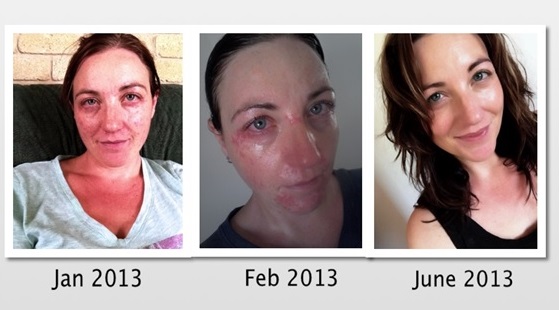 Showing the incredible improvement in my skin in only a matter of months!

It was my 30th birthday in June 2010 when I first came down with Glandular Fever.  I can vividly remember needing to have a shower and I had to get up the stairs in order to do so. It seemed so overwhelming and I simply could not muster the strength, but sat on the floor and cried. This was not how I’d planned to be feeling when I hit 30. I had vowed as the years crept closer to 30 that I would look and feel better at 30 than I did at 20. My 20’s were my child rearing years, having had my first child at 21, and my fourth child at 27. It had been an enormously busy decade and I had been looking forward to my 30’s, assuming the worst of the assault on my body was over with, having had 4 children in six years! However, here I was at 30, feeling more tired than I ever thought possible. This marked the beginning of my downward spiral in health.

From this point, I continued to simply get more tired and unwell. I don’t think I ever fully recovered from Glandular Fever, and seemed to keep slipping back into it – it always began with feeling cold, so cold that I could never warm up, no matter what I did. Then I’d rapidly decline into aches and pain, sore throat, swollen glands, debilitating migraines and incredible night sweats. After a year or so of this, my health just never picked up. I was exhausted beyond belief. I went to the doctor a couple of times, explaining that the tiredness I felt wasn’t right. He did standard testing, but everything came back fine, albeit a positive testing for Epstein Barr Virus, which I knew was the case. He told me that I had four young children, and to expect to feel tired.  From there I tried natural therapies, and went fully into supplements, Chinese medicine, acupuncture, chiropractic care, massage etc – there was nothing that helped, a lot of it only served to make my symptoms worse. I began to experience disturbed sleep patterns and would have weeks of insomnia at a time, regardless of how exhausted I was. I had little time to look after myself and rest with young children at home, and I began to dive deeper into this horrible pit. I was gaining weight, had awful acne issues, and was barely making it through each day.

I had just finished a musical production, during which time I’d had another relapse of Glandular Fever. The schedule was full on and exhausting and left me no chance of resting or recovering, and from here, my body just couldn’t do it anymore, and crashed big time. This is when everything began shutting down and I became incredibly toxic and ill. I developed a whole range of new symptoms, the worst being auto immune issues that led to an insane amount of allergies, resulting in severe peri-oral dermatitis, which left me so self conscious I barely left the house. It never went away, although the severity of it lessened occasionally and I could handle leaving the house, but with tons of make up on. My doctor told me it was probably just seasonal conjunctivitis from the dry grass.

By February 2013 I knew there was something very, very wrong with me, and I was getting increasingly frustrated with doctors who were of no help whatsoever. I began doing my own research and soon started putting some pieces of the puzzle together. I realized I probably had a very leaky gut, which was contributing to autoimmune issues, candida and severe allergies. I also started to suspect I had Chronic Fatigue Syndrome and began to do a massive amount of reading on that. Thankfully through this reading I discovered a GP in Adelaide who specializes in CFS, and by March I had been to see him and was confirmed to have CFS. His understanding and support was paramount to turning the corner, finally feeling that I wasn’t going crazy and that my body was, indeed, very ill. I wasn’t quite bedridden at this point, but very close. I was barely functioning – 20% capacity on the best of days – and was unable to exercise or do any kind of strenuous activity. I lived in a constant mental fog, barely slept and was an emotional mess most of the time, as well as having lost all my confidence from months of feeling unable to leave the house. I had read about people with CFS who had been that way for 20 years or more – I was discouraged by this, but more determined than ever that this was NOT going to be me!!! We talked about ways of managing the condition, but after the reading I had done, I was beginning to see that diet had been one of the biggest contributing factors to the decline in my health, so therefore diet could also be one of the biggest contributing factors to improving my health. I had always thought I had a reasonably good diet, keeping track of calories and trying to make “healthy” choices, but hadn’t realized how detrimental grains, dairy and sugar had been, and how many foods I was eating that were labeled as “healthy” were in fact, very far from that.

I had done a lot of reading about the Paleo diet, and how this lifestyle and way of eating is credited to healing of every single one of the ailments that I was suffering. Knowing I had no choice at this point, I took the plunge, and I have never looked back. The improvements in my health have been fast, drastic, and incredible. It was three years ago that I first started to get sick. It was only three months ago that I began a Paleo lifestyle, and I feel like I have my life back.

I am studying part time, working part time, and exercising moderately most days. Whilst weight loss has never been on the forefront of my mind in all this, health being my first priority, I have lost 8 kgs, gained muscle strength, and am more lean and toned than I have ever been. Yes, I still struggle with the symptoms of Chronic Fatigue – I still have limitations that I have to carefully adhere to or I am liable to have a crash that could take weeks to recover from. I have to be careful not to exercise too hard, and I’m aware of not having too big a social life right now. I still get tired and have the odd foggy brain day if I haven’t slept well. My sleeping has improved greatly, but I still have a little way to go.  I’ve gone from 20% functioning at best to 80% most days and in only three months, I feel better than I have in the last 3 years, and I know that I am going to continue to improve every day that I embrace this new lifestyle. I know if I had not changed to a Paleo lifestyle, I would not be where I am today. It was not easy initially, but I know now that I will never look back – finally, I feel way too good for that!-Kathy

While this isn’t really about weight loss for me, I can’t complain about an 8kg weight loss and the difference that has made to my health and confidence! 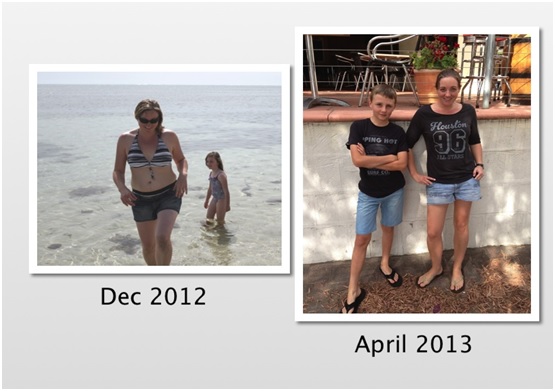