Sugar: back on the Paleo menu! (APRIL FOOLS)

Over the last few years, we’ve seen white potatoes and white rice creep into the Paleo scene as “safe starch” alternatives to the beloved sweet potato (among other vegetables). However, after doing a lot of soul searching and scouring many scientific papers, we have come to the conclusion that sugar of all sorts (cane sugar, white sugar, brown sugar, etc.) are all pretty much okay to consume. So in an effort to make Paleo even easier and more accessible to the masses, we are proud to say that it’s okay for everyone to eat sugar again! You know you want to!

There’s nothing quite like having a sugar craving at night, and now, instead of having to look for “healthy” alternatives, you can just reach for a candy bar. No big deal! With this recent change to our “30 Day Guide to Paleo” program, it’s so easy, anyone can do it!

In celebration of our new inclusion of sugar in the 30 Day Guide to Paleo (30Paleo for short), we’ve cooked up a batch of candied orange peel. Who knows, a recipe like this could even make it’s way into our next book! For this recipe, I followed Alison Walker’s recipe in her book, A Country Cook’s Kitchen. Hayley gave me this book as a christmas gift this past year, and I’ve really enjoyed flipping through it and reading about the recipes. Now, for those of you with our new cookbook, Make It Paleo 2, you already know I LOVE A FOOD PROJECT. There’s a whole chapter of them in our new book, with projects like how to cure your own bacon, how to make your own coconut milk yogurt, fermenting ginger beer, curing salmon, pickling burdock root, rendering lard… it’s a really fun part of the book that’s also a little unique! (by the way, if you haven’t gotten a copy yet, you can get it on Amazon (of course), but it’s also in Costco for a huuuuuge discount, as well as Barnes & Noble and other bookstores too).

Anyway, this recipe was a fun project (albeit a long one), and since we’re totally cool with eating sugar by the spoonful now, we thought it would be fun to have around to snack on in-between meals. 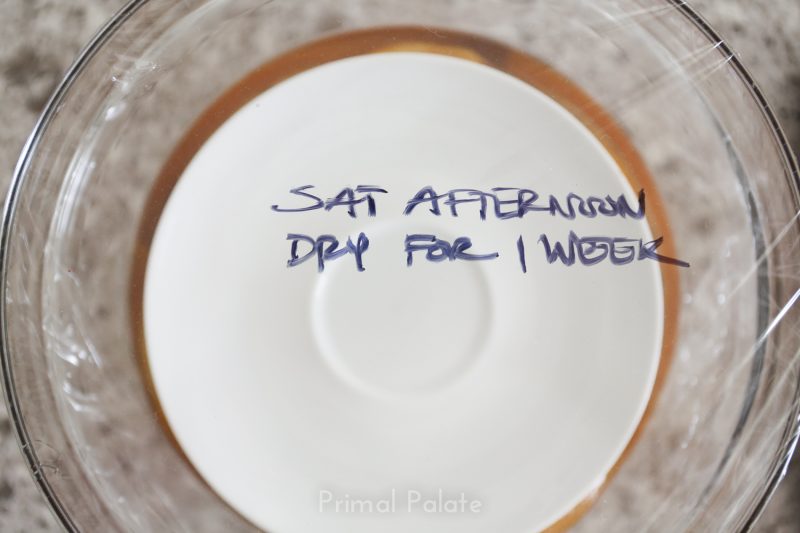 For the first week, we only took a few instagram photos, so the nice photos pick up around the halfway point in the project. Here’s my reminder to myself to let these dry, starting on Saturday afternoon. 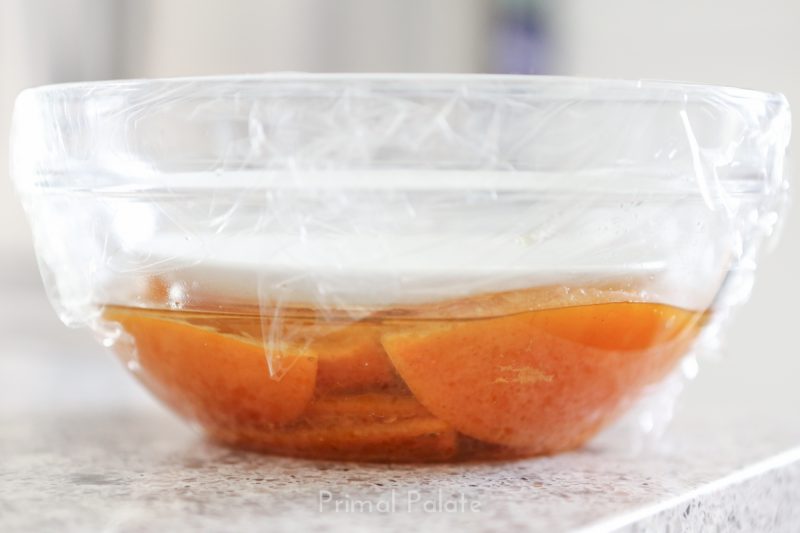 The orange peels were boiled in a simple syrup (1:1 ratio of water and sugar), several times over, and then subsequently left to steep in the increasingly concentrated solution. 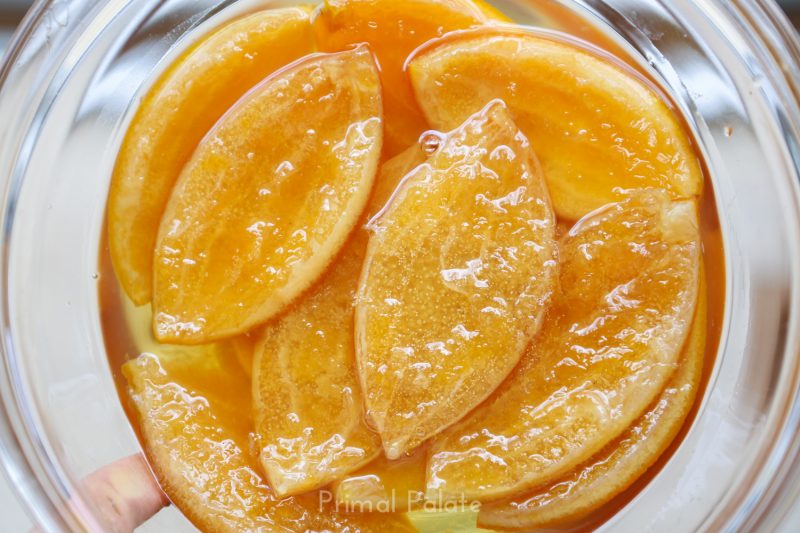 After a week of going back and forth to the burner, and steeping, the orange pith becomes translucent. 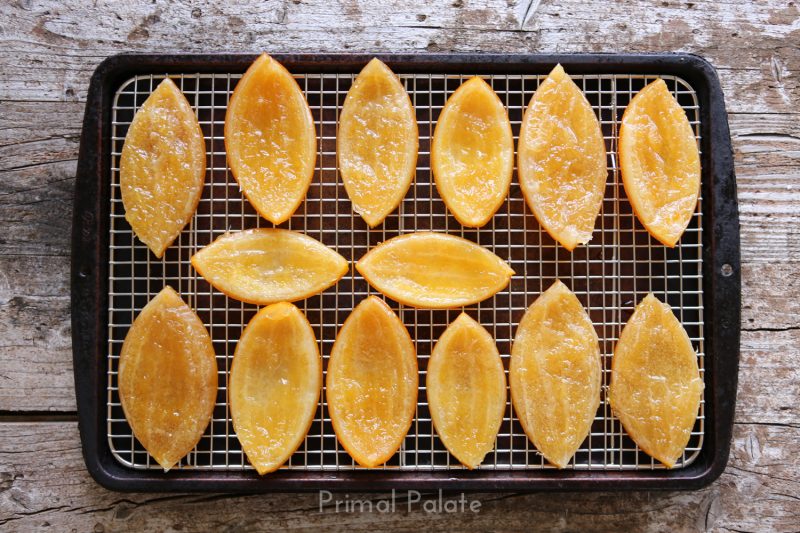 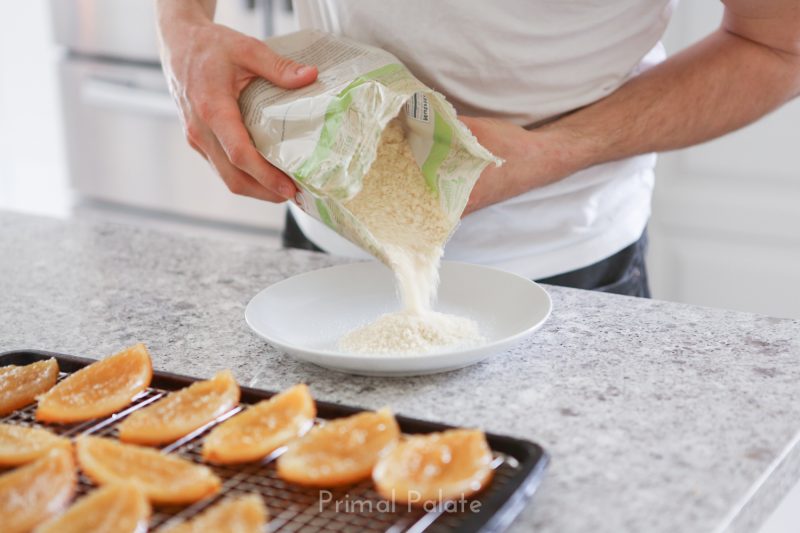 There we go, just dump an entire bag of raw cane sugar onto a plate. 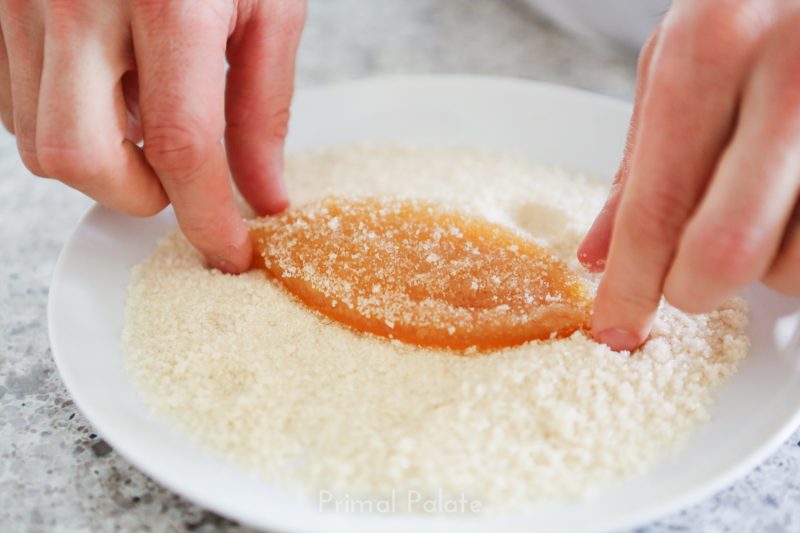 And then let the sugary bites of orange roll around in it. 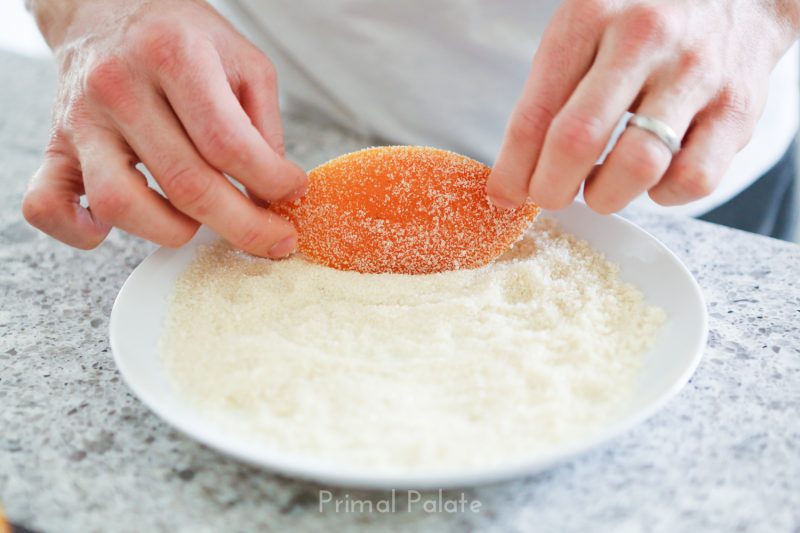 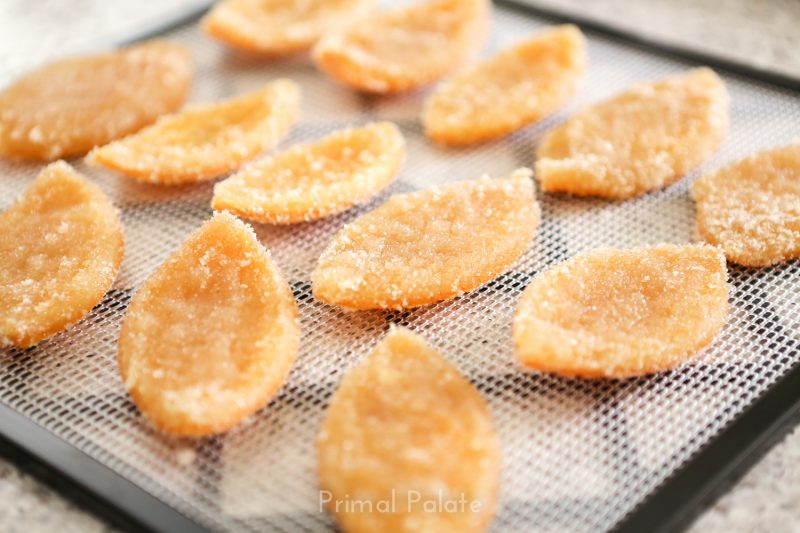 Now, the next step in the recipe says to let the orange peel sit out for one week. Um, WHAT? Ain’t nobody got time for that. 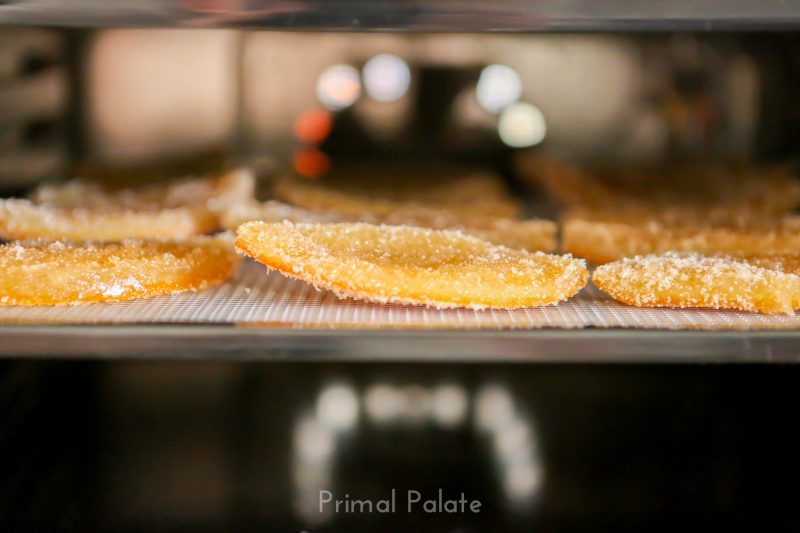 So into the dehydrator they went! It took about 36 hours for them to dehydrate adequately. 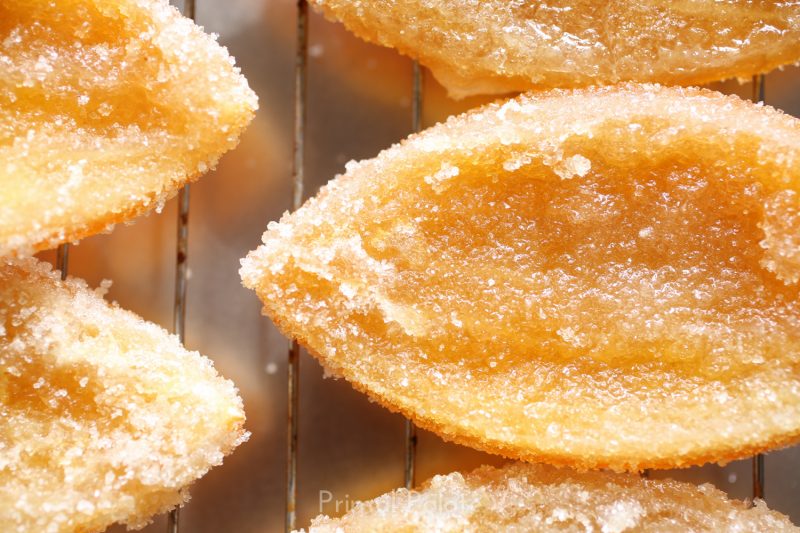 And about a day and a half later… voila! Sugary sugar orange peel. MMMM! 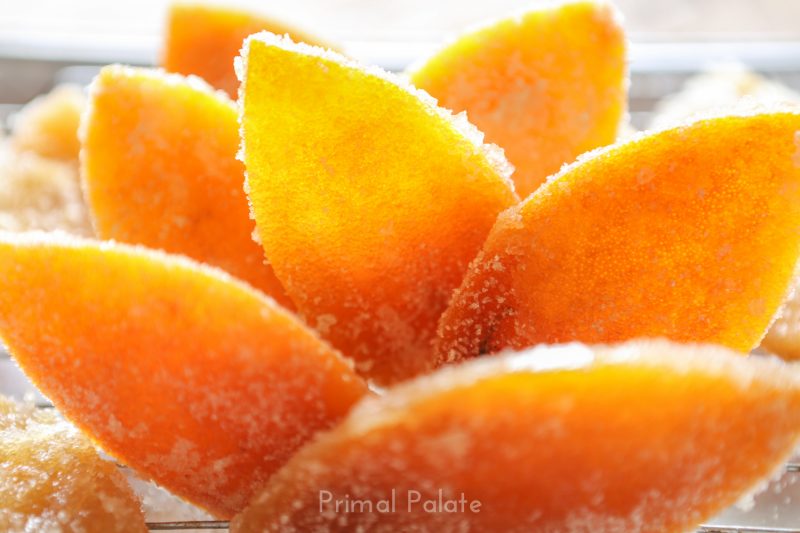 Gosh, I hope by now you figured out that we were kidding about the whole sugar thing! If you want to find out more about going Paleo (and what it’s ACTUALLY ABOUT), our 30 Day Guide to Paleo Cooking program is on sale this month (and you get 60 Days of recipes and meal plans, instead of just 30!) Click below to see whats included in this awesome guide, which is perfect for anyone wanting to get started on this whole Paleo thing. 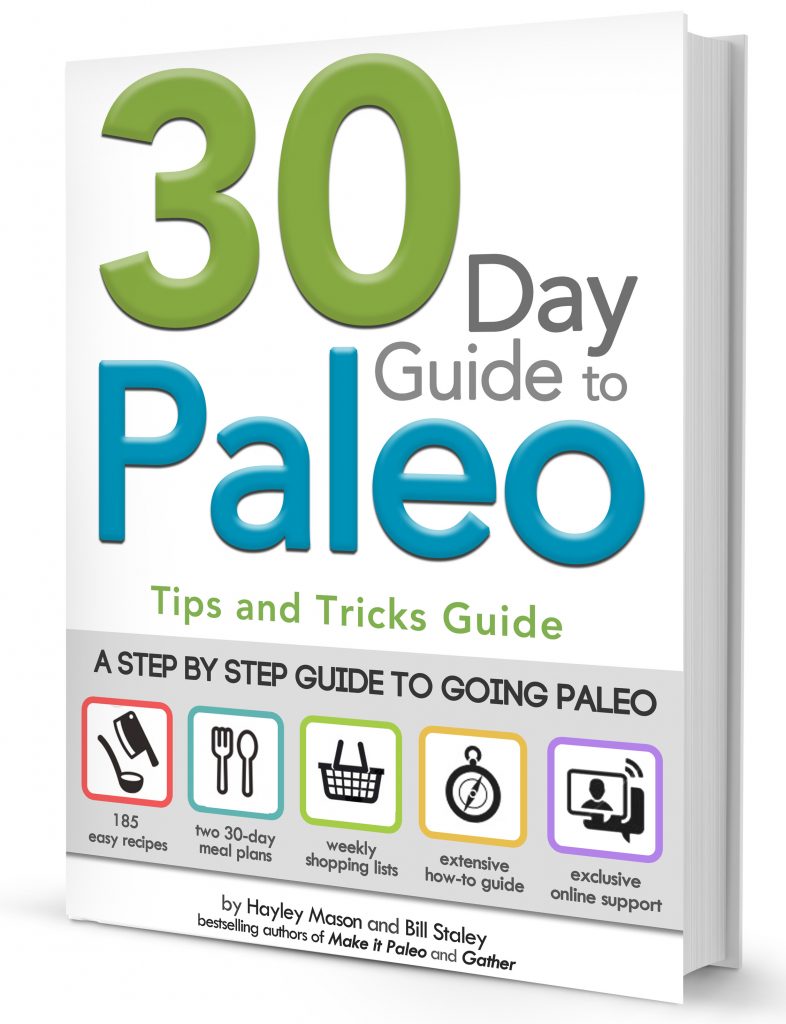