Hey folks – it’s Bill here filling in for Hayley’s usual blogging duties. We’re on day 18 of the 21 Day Sugar Detox and the “end” is in sight. Hayley and I, truth be told, have all but lost our desire to reintroduce sugar back into our diet. Today, while at the grocery store, Hayley wistfully paused in front of the artisan dark chocolate and pointed out a 90% bar. “Do you want some?” she asked. I said “of course I do, but we don’t need it.” She acknowledged that I was right, and I think we both proudly walked away from the drugs chocolate. While it might not always be that way, we’ve come far from our first days of the detox and the awful feelings of withdrawal and irritability. We’ve overcome our addiction, and I think we’re both quite wary of letting it back in. Of course, it doesn’t mean we’ll never have sugar again, but I think we’re going to be much more mindful of the consequences a binge may hold for us.

Today’s recipe is one the two of us collaborated to put together. It’s funny to think that just a year ago, Hayley was not even eating any red meat. Here we are 10 months later, and she’s now quite the master of flavor pairings with almost any type of meat! We had two recently purchased lamb steaks from US Wellness Meats in our freezer, and I really wanted to have them for dinner. Hayley suggested that we grill them with salt and pepper, which although I thought was an excellent idea (flavor-wise), it wasn’t something we could blog about. I headed over to the computer and did a quick search for some interesting lamb steak recipes. One that came up was an African dish that used some unique spices. What I found out is that lamb is a common street food in Egypt, and they flavor their lamb with all sorts of great spices like coriander and cinnamon. They also like their food spicy. With these flavor traits in mind, I started pulling spices off the shelf. Hayley got in on the action and helped me round out the pairings. The result were steaks that were chock full of aromatic, spicy flavorings (they literally smelled amazing the second they hit the grill). We kept their cooking time minimal, because lamb has a tendency to be on the tougher side, so a medium rare steak is preferable from a textural standpoint. These were great, and I’d gladly try this spice combo on other cuts of meat – I’m specifically thinking of skirt steak or a bison filet. 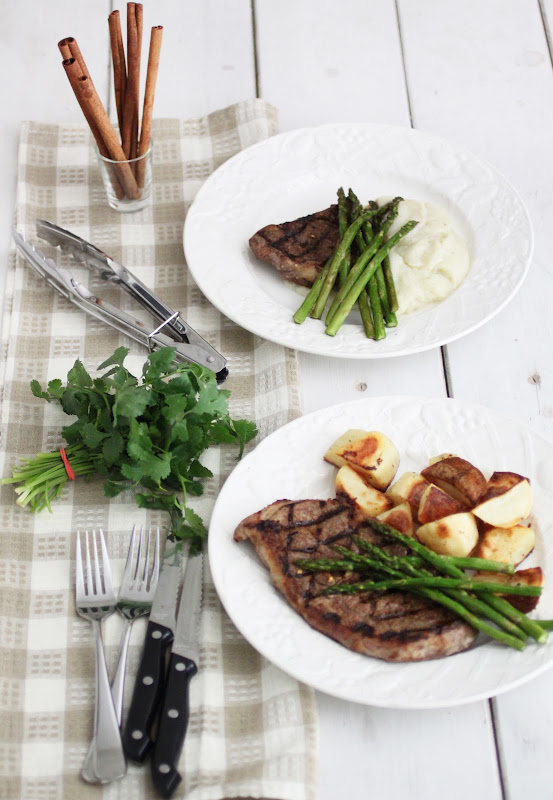