Posted June 28, 2011 by Bill
Last Saturday I was off doing wedding makeup, and Bill was at home getting some things done for his clients as well as our blog. One of the things he really wanted to do was stop by our local farmers market to see what they had right now. I was bummed that I couldn’t go with him, but there were ladies at a hotel downtown expecting my arrival to paint their faces.
After I was done working, I was off to Whole Foods and Trader Joe’s to grab some groceries for the week. I touched base with Bill upon walking into Whole Foods to see if he got any produce at the farmers market, in which case I wouldn’t need to get as much at the store. Bill said that there wasn’t really anything too interesting at the farmers market except for some “garlic schppsis”. For the life of me I could not figure out what he was saying on the phone, and I’m pretty sure he was calling them the wrong name anyway.
“Garlic what?” I asked. “Garlic scraps?” “I think they are called “Garlic Rapes” he replied (Sheesh, I said RAMPS, haha – Bill). I was almost certain there was no way that could be right… “they are kind of like green onions, but from garlic”. Now I was just kind of frustrated. I had no idea what he was talking about, and for the life of me I could not visualize them either. He also didn’t know what to do with them, but he liked how interesting they looked so he bought them. That’s what happens when you send an artist off to buy food.
After a very confusing phone conversation, we agreed that I still had to get some produce for dinner, and left it at that. I’m still not exactly sure how Bill ended up figuring out how to cook them, but regardless they were delicious! Judging by the response on our facebook page, many of you are also fans of these tasty greens. For those of you that are new to this unusual vegetable, garlic scapes are the above-ground shoots from garlic plants, and are harvested this time of year in attempts to make the garlic bulbs grow bigger. They do look similar to green onions, but they have a distinct garlic flavor to them. They are delicious and a fantastic addition to grilled, roasted, or sauteed vegetables. We cannot get enough of these guys right now, and we will definitely be adding them into all sorts of veggies until they are officially “out of season”.
Ingredients:
Process: 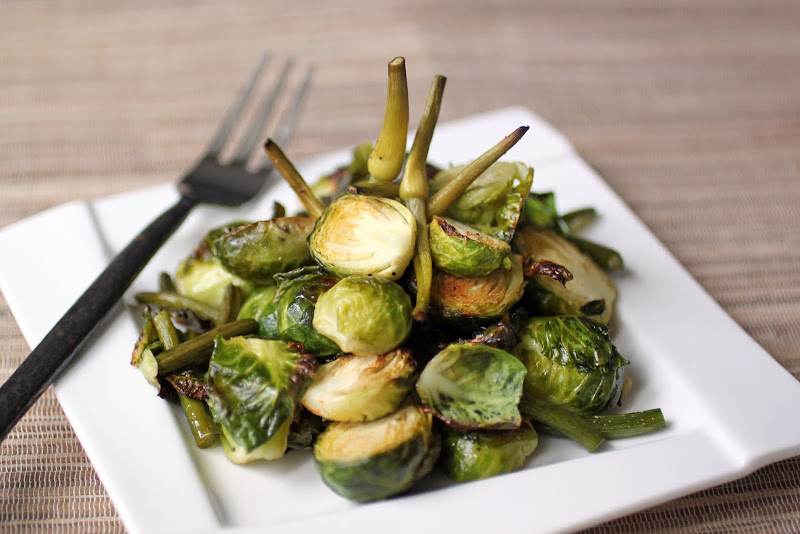