Bill’s mom has been talking to me for weeks about wanting to make some sort of apple dish. The toss up was between apple pie and apple crisp. Both recipes we plan on posting, but for now, we present you with delicious apple crisp.

Bill and I were on our way home from my best friends wedding in Kentucky when we got a call from Nellie saying that the apples from her tree were ready for picking and she needed a recipe pronto! I had never made apple crisp before, so I immediately got out my phone and googled “apple crisp recipe”. Several came up, and like other baking dishes I use for inspiration, I found one that was a suitable starting point and called Nellie back with some ideas for her apple crisp. She had also found a recipe to use, and made some healthier alterations to the recipe of her own. She said she would attempt this crisp, and have Bill and I try it to see what we thought. It was delicious – she made a fantastic apple crisp!

Bill and I then decided to make our own, also making a few other alterations to the recipe that his mom had given us, and we were off to the food lab to cook up an amazing apple crisp. The weekend we made this crisp, we were cooking a big dinner for my family. They requested a few of our favorite dishes from the blog, so we used this opportunity to try out the new apple crisp. It was a hit! This is a simple recipe, perfect for the fall weather that is on its way. Try this out, and let us know what you think! 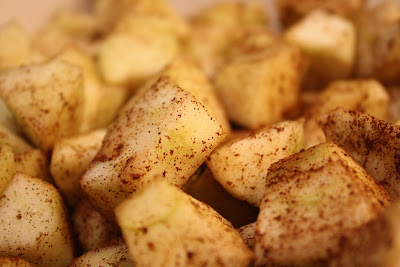 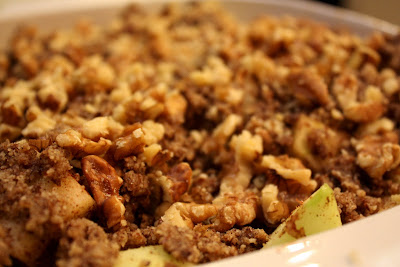 This apple crisp is delicious warm out of the oven, but Bill and I are known to sneak a bite or two right out of the fridge. We highly recommend this dessert. It’s delicious, simple, and a healthier option for cool fall evening treat. Enjoy! 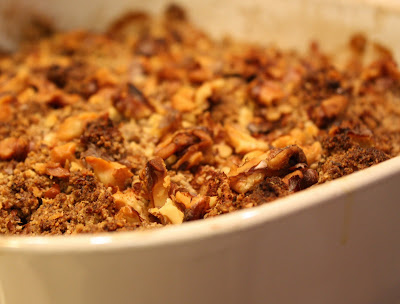