Posted July 28, 2011 by Bill
We want to start out this post with an apology. The two of us have been completely dishonest, secretive, and downright sneaky with you all for months now. We’ve been harboring the biggest secret of either of our lives, and have not been able to share it with you until now. Perhaps you’ve noticed that it has been a bit quiet around here. Simple recipes, no videos, no podcasts… something must be up, right? Well, something is definitely up, and we are going to fess up to it all right now…
Our news is that we have written a cookbook. A BIG cookbook. A 450 page, 215 recipe, full color cookbook! This monster of a cookbook is the sole reason for our lack of sleep, stress, and bit of paleo treat splurges prior to this month of clean eating. This book is why we have spent all of July focusing on quality sleep, and super strict food choices. However, this book was worth every ounce of stress, every hour of sleep lost, and every bite of dark chocolate and kerrygold cheese (okay, well that wasn’t because of the book, but we can pretend it was).
Our book, titled ‘Make it Paleo’, is scheduled for release on October 20, 2011. We’ve been working on the book for months, and it has become something of a child (almost) to us. There is so much to tell you about the book, it’s hard to know where to even begin. We were approached by Robb Wolf and Sarah Fragoso’s publisher, Victory Belt, in early 2011 to consider the possibility of doing a cookbook. This has literally been our goal since day one, and we were elated to accept the challenge. What ensued were months of tremendous work to put this book together. The time we spent putting this book together now seems like a distant memory. A foggy memory of a few months of our lives that almost feel like they never happened. Some days we look at each other and say, “Did that really happen? Did we seriously create a 450 page cookbook?”
We started out with a core group of 100 recipes which we knew we could pull from this very website, and figured we could compile another 100 in the given time. That was the thought, at least, on day one. However, as the project grew and we got to work, we realized that we wanted to raise the bar for ourselves. No longer were our old recipes (and photos) good enough for us, which meant they were certainly not good enough for you. Many of the 100 existing recipes from the blog hit the chopping block, and the remaining ones were slated for reinvention. Of the 215 recipes in Make it Paleo, the vast majority are new! Put another way, this is not just a printed version of our blog.
So why did we call the book “Make it Paleo?” Good question. In fact, for a long time we had no idea what to call it. Many nights were spent with the question rolling around in the back of our heads. Finally, we went to the title page in the design file and started scrawling out potential names.
“The Food Lovers Paleo Cookbook”
“The Food Lovers Paleo Kitchen”
“The Food Lovers Cook Paleo Food”
….. things started falling apart…..
“Grains are for LOSERS”
“If you don’t eat Paleo, you suck!”
“Just don’t eat crap, okay?”
“Best damn cookbook, ever”
…. but then ….
“The Food Lovers Make it Paleo“
It just hung on the screen for a moment as we silently stared at it. All paleo folks wonder this at one time or another. ‘How do I take a certain dish and Make it Paleo?’ We happen to think this to ourselves on a daily basis as we create and recreate our favorite dishes. In fact that phrase was spoken about almost every meal that we had created up until the book. It just felt right, and after a bout of facetious, silly titles, we had found the one! Without further ado – here is the cover which you’ll probably see many times over the next several months: 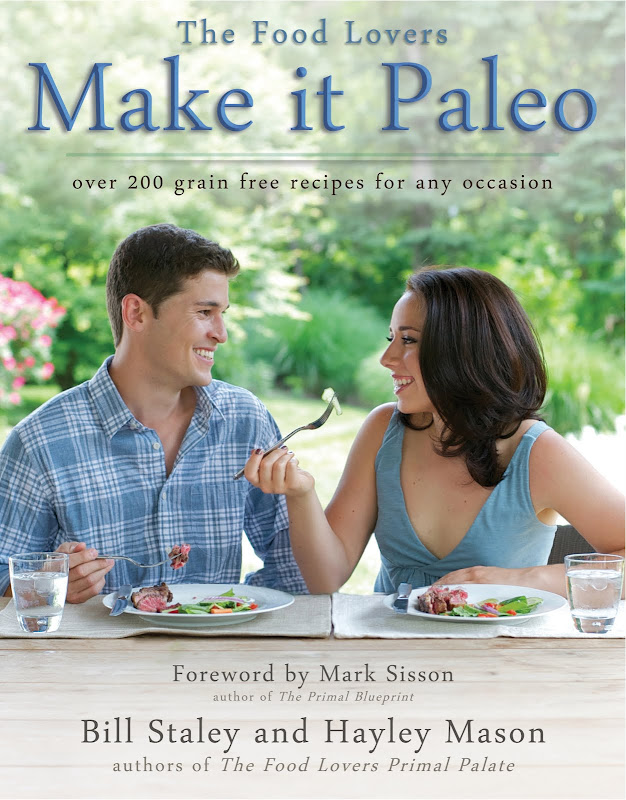 This journey has been quite amazing, and the only thing missing was that we couldn’t share it all with you as we went along. We tried our best to document some of the journey (cooking, editing, etc), that we will be sharing in the next couple of months prior to the book release. A highlight for us was taking our first substantially complete draft and going through it (ruthlessly) with a red pen on the beach during a long weekend at the shore. That was especially hard to keep to ourselves.
So, you’re probably wondering what you can expect in this book? What better way to show you, than to direct you to the book’s website: www.MakeItPaleo.com. There you’ll find a 30 page preview of the book, an overview of the book’s highlights, author bios (though all you die hard followers know us already), and the all-important link to Amazon for pre-ordering your copy. The pre-order button will activate any day now, but for now you can click to receive an email notification to let you know when it goes on sale.
http://vimeo.com/moogaloop.swf?clip_id=27152276&server=vimeo.com&show_title=0&show_byline=0&show_portrait=0&color=00adef&fullscreen=1&autoplay=0&loop=0
Okay, so there is one last thing that we’re super excited to tell you about Make it Paleo. If you looked closely at the cover, you’ll have noticed that the one and only Mark Sisson of Mark’s Daily Apple and Primal Blueprint fame wrote the foreword for the book! We are beyond honored by the kind words Mark had for Make it Paleo. We’ve made these pages available in the book preview on www.MakeitPaleo.com in case you’d like to see what Mark had to say. Mark was incredibly generous to take time from his busy schedule of PAST seminars, PrimalCon, writing new books, writing his sensational blog, and spending time with his family. We cannot say enough about Mark, his generosity, and his contributions to our ever growing community. His sincere and thoughtful words were more than we ever could have hoped for.
So that, dear friends, is the huge secret we’ve been carrying with us for months. Stay tuned for giveaways, news, and all sorts of fun stuff leading up to the book’s release in October!
Thank you so much for following – the best is yet to come.
-Hayley and Bill
« Previous post
Next post »