I was browsing around Son Of Grok’s blog one day when I came across his ‘Primally Delicious Hummus’ recipe. I decided to take a better look, since I knew traditional hummus is a no-no with primal eating due to the chick peas (no legumes). I found that Son Of Grok made his hummus with zucchini instead of chick peas – amazing! Now this, I thought, I gotta try.

This hummus recipe was something I didn’t really plan on making right away, but I kept it in the back of my mind as something I wanted to try eventually. About a month ago Bill and I had a “primal cookout”. We have quite a few friends (mostly crossfitters) who follow The Paleo Diet, and we decided it would be fun to have a little get together and share lots of recipes and tasty meals. I thought it was the perfect opportunity to try out the hummus.

For the party, I followed SOG’s recipe to the ‘T’, and it turned out fantastic! It tasted just like traditional hummus, I couldn’t get over it. The only problem (which may not be a problem for some), was that I felt it called for a little too much garlic. At first taste, it was delicious, but after a few bites, I felt like I was oozing garlic from my pores, and was a little concerned with speaking too close to some of my friends…

The second time around, I knew how I wanted to modify the recipe for my palate. For this post we made the same hummus recipe but used less garlic, and added another delicious twist: a little kick with some sauteed peppers and toasted pine nuts. At the party (and how I prefer to eat my hummus), we set out lots of fresh veggies for dipping. For this post, I decided to tackle some grain free crackers. I had been wanting to try to bake crackers for a while and figured this was a great opportunity to give it a shot. I got a general idea of ingredients measurements for the cracker recipe from Elana’s Pantry. I had an idea to make flax crackers using flax seed meal, but since I had never made crackers from scratch, let alone grain free crackers from scratch, I needed a base recipe to work from. When we made the crackers I had no idea if they were going to work out (I’m pretty sure I told Bill that they might in fact be awful), but they ended up being delicious!

For the Hummus:
Ingredients:

For the peppers and pine nuts:

Garnish the hummus with the spicy peppers and pine nuts. Feel free to eat as is, or mix the topping into the hummus. Either way is delicious!

For the Flax Crackers

When Bill and I tried these crackers for the first time, we scaled down the recipe a lot in case they ended up being a bust. For the second time around we used the recipe presented to you here, and we also used sesame seeds instead of the whole flax seeds. Both recipes are quite delicious, give them a try! Enjoy! 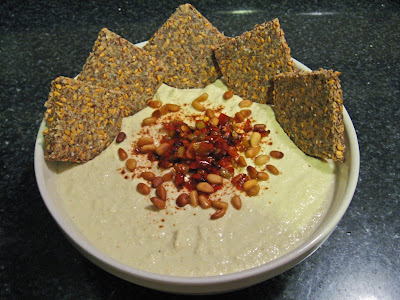