Yesterday, you heard the story of V, aka PaleoBoss Lady and her struggle of battling MS since the age of twenty-three. Today, hear how she’s been able to reverse her symptoms by following the Wahls’ Protocol and her plans for the future. (you can read Part 1 here)

Yesterday, we ended your story with your time at Burning Man in 2010. What happened after you came home?

On January 1st of 2011 I gave up gluten. My body responded so well I knew I had to change my diet. One year later—to the day—I started following the Wahls’s Protocol. It’s a modified version of Paleo. I was already using aromatherapy and meditation [to heal], and food was the last piece of the puzzle. That’s when the big magic happened.

I started Wahl’s in January and by March I was off injectionables—which I took for nineteen years. By October I was off all drugs. The only drug I currently take is for an underactive thyroid. At one point, I had ten hours per week of doctors appointments. Now, I go to one physical a year—which is the only time I see a doctor. I don’t even see a neurologist. Look at all the time I got back!

In 2013, I moved independently for the first time in my life. When I first got the idea, I told my physical therapist. All she could say was, “Wow.” I was fine living with someone who came 40 hours a week to check on me—but by myself? How would I afford it? Could I walk my dog by myself? Would I live close enough to public transportation? It was something I dreamed about for so long, and suddenly it was real. 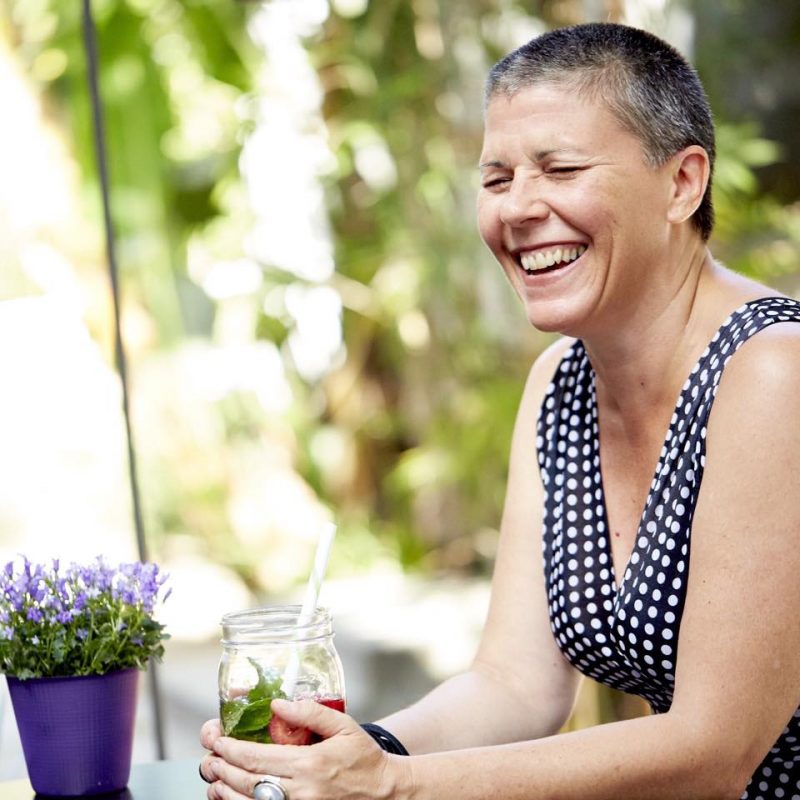 Those of us who are unfamiliar with MS may not understand what a victory it is to live on your own. Can you describe the symptoms you had just a few years prior?

In 1996, I had an attack that left me bedridden for six weeks. It affected everything from my vision to my legs—I couldn’t walk down stairs or hold my torso up. That’s what MS does to you.

I had no feeling on the left side of my body for twenty-six years. I lost bilateral use of my hands. I had trouble swallowing, involuntary limb jumping, bladder issues, and burning up and down my arms. I had candida, double-vision, facial twitching, IBS, fatigue and balance issues. To this day, I still lack proper emotional control. When someone gets hurt, I’ll laugh. About ten percent of people with MS have this.

That’s insane. Can you believe how far you’ve come?

Yes. I can’t talk about it without getting emotional. There’s no reported case of turning MS around—except Dr. Wahls. Terry Wahls is not only a mentor, but a true friend.

Five years ago, I could only drive five miles a week. The first time I drove a significant distance was last January when I drove twelve miles to see Nom Nom Paleo. It was such a challenge for me. My plan was to drive twelve miles, take a four-hour break, and return home. I was so nervous I was an hour-and-a-half early. I met Nom Nom and starting crying my eyes out. I mean, snot-dripping-down-my-nose, trouble-catching-my-breath, crying. I was so proud of myself for how far I drove and it was a tender moment with one of my idols. Today we’re friends and I still cry when I see her.

That twelve-mile drive was in January. In April, I announced I would drive 200.

What is your daily routine?

I wake up by circadian rhythms, usually between 3-4AM. Within the first two hours of waking up, I dance. Dancing sets the tone for my day and lets me know which part(s) of my body need extra attention. If I can’t even pick my Pandora station, I know my brain is in other places.

I walk between two-to-five miles every day and do focused yoga movements six times a week. I do breath work and fifteen minutes of meditation a day. I vary my meditative state between walking, sitting, and staring meditation—whatever works for me that day.

That’s incredible! You’ve come so far. Do you have any tips to stay healthy?

I make every effort to rid toxins from my life. I don’t wear toxic makeup and no longer drink alcohol. I’ve had thirty-one MRIs where I was injected with a radioactive dye in my lifetime. I believe this will be the last toxin to leave my body.

I eat nine cups of vegetables every day. Consuming such a large amount of raw vegetables bothers me, so I blanch them under hot water. I also make smoothies with collagen added in and drink bone broth every day. I fast from the time I go to bed to my first meal of the day—a minimum of eight hours, but I shoot for ten. Turmeric and black pepper are also great for fighting inflammation.

At PaleoFX this year, I was invited to speak on a panel with Chris Kresser. It was such an honor. I got sick three days before the trip—I haven’t been that sick since I started eating consciously. I knew no one would let me board a plane if they knew, but I did it.

And when I said I did it, I mean I did it. From six in the morning to eleven at night the day before my flight, I did everything I could to heal. I knew what I had to do: my yoga poses, my turmeric drinks, my daily mantras—it all worked. Before, it would have been doctors appointments, hundreds of dollars, and ten days of feeling miserable.

Do you ever think about the relationships you gave up—the people you cut out after Burning Man?

I lost 50 percent of the people in my life after Burning Man. One of the hardest friends I gave up was with someone I traveled with. We met every day for yoga at 8AM. After Burning Man, I just stopped going to that yoga class and answering phone calls. That was in 2010. In March of this year, I received an email from that friend. It said, “I read your newsletter each week, and I’m so proud of you for all the steps you’ve taken.” She never made me feel guilty or called me an asshole. She actually made the trip to Burning Man possible—right before I cut her off.

Do you have any tips for someone who is just starting Paleo?

I’m not even saying you have to be Paleo—I’m saying you have to question the status quo. Decide to live in harmony with your body and let it tell you what it needs. Many people with disease follow cultural norms. When you step out of those norms, it can be very scary. I’m someone who publicly shares my journey because so many people with disease are alone.

1. Have an honest conversation with yourself.

I’m 100 percent Italian, where gluten and sugar play a large role. I didn’t think I could give both up at once (and loved sugar), so I gave up gluten first. That first year, I didn’t care what the ingredients were—if it said gluten-free, I ate it. I gained 50 pounds that year because I ate such terrible foods. I started the next year with a Whole30, gave up dairy and sugar, and went Paleo.

I’ve had the support of community since day one. Whatever you choose to do, find a group and go for it. It can be a Whole30 group, a book, bloggers, Doctor Wahls, you name it.

When I wake up in the morning, I give myself an hour to just lie in bed—that’s being conscious. This is a no-judgment lifestyle. I made my life public to ignite a flame in you to stop living an autopilot life.

Where is PaleoBossLady headed next?

That’s up to the community. I’ve gone to 14 different states and held over fifty talks. I say, “Where do you want me next?” and whoever screams the loudest, that’s where I go. My hope is this year will be the US and next year will be New Zealand or Australia. When I told my daughter of my plans she said, “You know mom, I think your whole life has prepared you for this.” 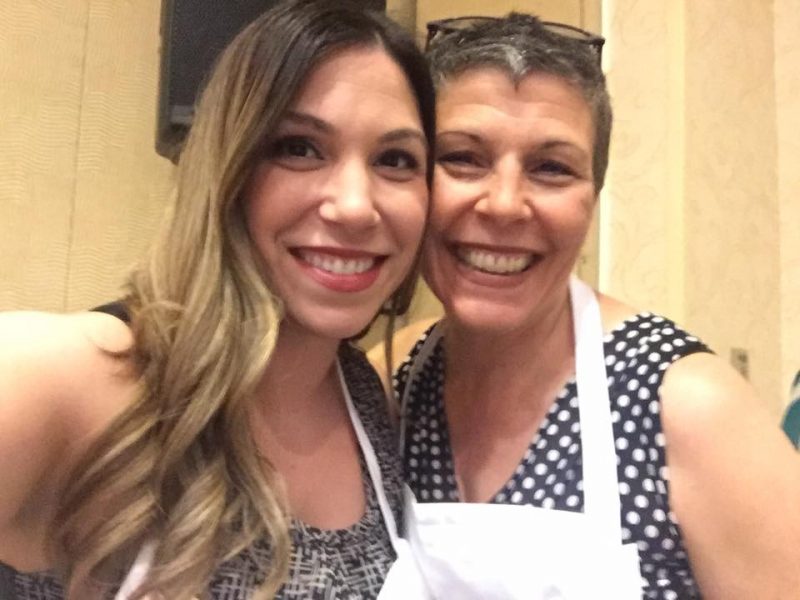 When I decided to go on tour, I had a month left on my lease but needed four months to plan. I asked a few friends in the community to put me up. My original plan was to rent an RV, but when the announcement came the responses poured in. People asked, “Will you come here? What about over here?” I still have MS—I’m not the energizer bunny—so it takes a lot of work each day.

If you could go back ten years, what would you tell yourself? What do you want to tell those going through a similar situation today?

I would tell them my healing was not all peaches n’ cream. I was scared to death, and there was hard physical and mental pain. Many times it gets worse before it gets better, but the other side is really wonderful. I no longer sit around waiting for MS to do what it’s going to do.

There are good people out there and if you are willing to swallow your pride, you can do this. You just might not be able to do it on your own. Remember it’s ok to admit you need help. Believe in yourself. It’s in you. I grew up on the beach, and in the summer we would dig for hours in the sand. We knew if we dug forever, we’d hit water. I never stopped digging because I believed in myself.

At times, I wouldn’t believe and I needed people to be my cheerleaders. Other times, I would say, “It’s ok to feel defeated today. You’re allowed to feel scared, but never forget it’s in there. Keep digging.” 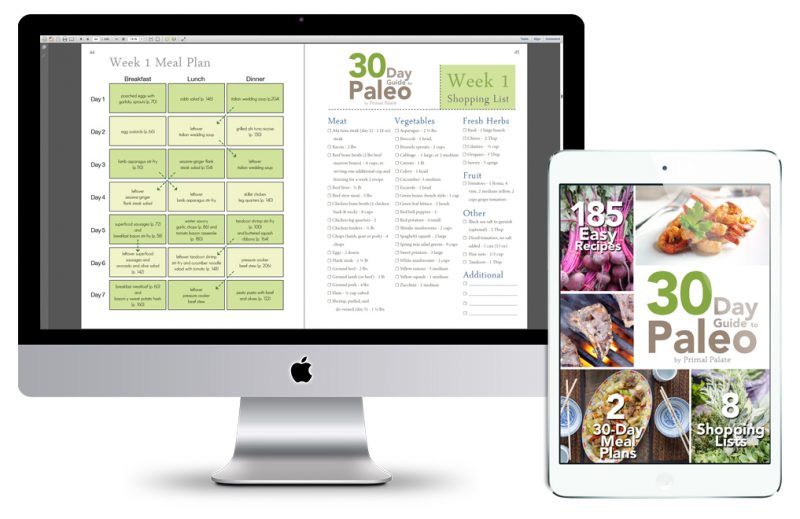