The day our package from US Wellness Meats arrived, Bill was off at a meeting with a client. I was home alone, “patiently” (I quote because I was checking the tracking every two seconds in anticipation.) waiting the arrival of all of our meat. When the FedEx man showed up I barely heard him knock at the door. As I ran to the door, he was already half way into his truck when I called out to him. He said he had delivered an “EXTREMELY heavy package” and left it by the garage door. I ran down to get it, and he said I might need his help. Help? Me? Come on. I do CrossFit. I would NOT need help. Boy was I wrong! That thing was monstrous and extremely heavy! The kind FedEx man brought the package up for me, and offered to carry it into the house. I was confident I could at least manage to get the thing into the kitchen myself, so I politely declined and thanked him.

After almost falling over as he handed me the package, I barely made it into the dining room without tromping on Bill’s tiny shih tzu, Miles. I set the box down on the dining room table, took a deep breath, held in my core as I struggled to pick the darn thing up again, and lugged it into the kitchen. After realizing I couldn’t open it (due to my height, or lack thereof…) while it was on the kitchen island, I then had to try to pick it up again, and then slowly sumo squat to place the box on the floor. Talk about lifting heavy things…I think I did a good job of covering Mark Sission’s Primal Law #3 that day.
Wielding a large chefs knife, I managed to cut the giant box open. I was so flustered and excited I could barely function, all while trying to text Bill photos of the package (my multi-tasking skills are not so great), and a knife was the first thing I could think to use. First I tried with my bare hands, but I’m a modern day cave chick at best, and I guess my hands are just too dainty for that. Anyway…I finally got the package open, and imagine if you will, angels singing from above while frosty air rose from the inside of the cold box, ice crystals glistening on the frozen individual packages of meat…okay you get the point. It was a beautiful sight. At this point I didn’t even know what I was looking at. I was too excited and still texting photos to Bill to really function properly.
As if trying to bring the box in the house wasn’t enough of a workout, unpacking it just added to it, being that I had to unload 32 pounds of beef back ribs, 10 pounds of chicken, plus other miscellaneous cuts of meat (advice to any one purchasing large amounts of meat-wear protection when unpacking…i.e.-winter gloves, hello frozen hands!). Among all the beef were also some packages of raw nuts which we have shared with you all, some raw goat cheese, and beef tallow! The tallow and goat cheese are what bring us to the recipe we are presenting today. Using the tasty sirloin steaks sent to us from the US Wellness family, we did a simple grill recipe. We used the garlic and chives raw goat cheese they sent along to melt over the steaks, and topped it off with mushrooms and onions sauteed in beef tallow. This recipe was quite tasty, and would be delicious using any cut of beef that you would like.
Ingredients:
Process: 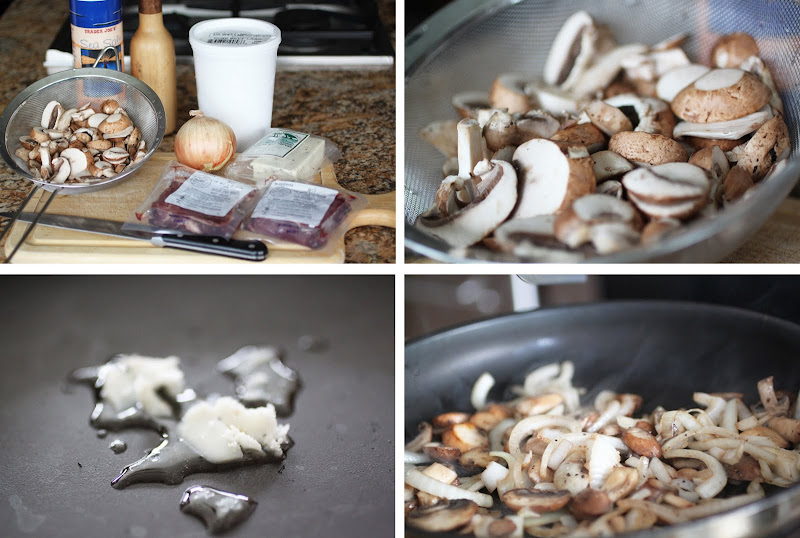 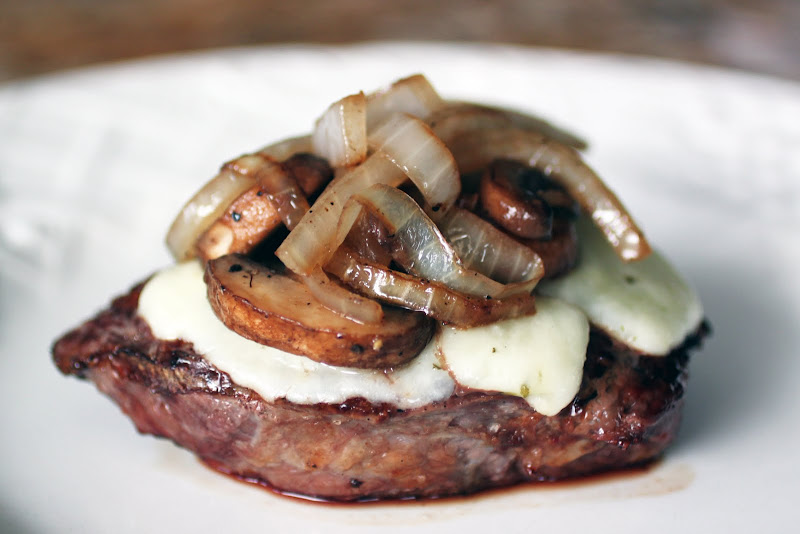