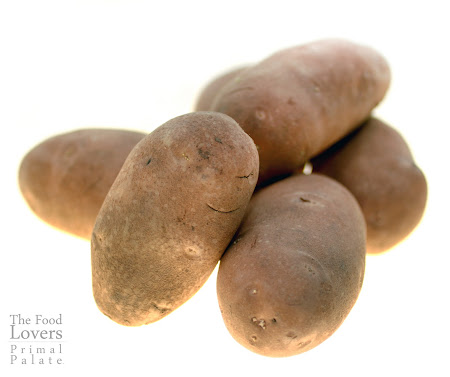 For a few months now, I’ve been eating white potatoes in my personal interpretation of Paleo with great personal success. I ditched grains back in mid-2010, and pretty much conducted the Paleo/Primal lifestyle ‘by the book’ – largely avoiding potatoes up until November 2011. (For what it’s worth, I’ve heard that Cordain didn’t include potatoes in the original Paleo Diet due to concerns with glycoalkaloids – read on for more on what those are and what that means to those who choose to eat potatoes.) However, back in November 2011, a post went up on Robb Wolf’s website basically saying that potatoes are “okay” to eat if you were meeting your personal fitness and body composition goals. This is the particularly resonant part of the post:

“(Should everyone) out there (be) chowing down on potatoes? Unfortunately, no. Not because there is anything unhealthy about potatoes, but a lot of people cannot process dense carb sources in a healthy way. It ultimately depends on your activity level and metabolic status. Basically those carbs fuel your activity level. If you’re living a desk to couch lifestyle then either up your activity level or keep the intake low. You have to earn your carbs. If you have metabolic issues (read: abdominal fat) then you need to get that sorted out first since you are not processing carbs correctly. It ends up being shuttled to the fat tissue instead of being available as energy.
But if you are a lean, hard training athlete then go ahead and eat up. In fact, you NEED to. Without sufficient dietary carbohydrates your body will start scavenging protein to convert to glucose (a catabolic process) and your aerobic capacity will suffer without sufficient glucose to burn the fat.” (Read the full article here)

Check and check – so the next time we were in Whole Foods, I dropped a 5lb bag of organic Russet Potatoes in our cart and we were on our way.


At the start of the new year, Hayley and I decided to join the masses of people cleaning up their diets by doing the 21 Day Sugar Detox. Diane Sanfilippo (who runs Balanced Bites and the 21 Day Sugar Detox) is a good friend of ours. She came to stay with us for a few weeks back in December while she cooked recipes for her upcoming book and we photographed them. She knows both of our personal dietary nuances very well – I, for example, have a FODMAP issue and that I generally feel better eating more starchy foods instead of those under the “FODMAP” umbrella. Given that, she gave me her blessing to keep starchy foods in (within reason) during the detox.

Throughout the 21 days, we’ve been blogging every day and posting nearly every meal, blog-worthy or not, to our Facebook Page. This has raised quite a few eyebrows, especially the part about me eating white potatoes somewhat regularly. Without fail, several people asked why I was eating potatoes. It seems a bit silly to us that potatoes are under heavy scrutiny, as people seldom ask us those same questions about our modern interpretations of “Paleo” baked goods (Chocolate Chip Cookies with Candied Bacon, anyone?) It’s funny because things like that would never have been recognized by our paleolithic ancestors as food – yet toss Grok a potato (or anything edible) and I’m sure he’d know it was something he could cook and eat. In other words, this way of life is a point of reference from which to conduct deeper, more critical thinking than just whether something is “Paleo” or not.


Robb Wolf isn’t the only heavy hitter that has weighed in on potatoes – so have Kurt Harris, and our friend Mark Sisson. While Kurt admits readily to eating potatoes, Mark takes a slightly harder line on them:

“(Potatoes) represent a bolus of dietary starch, which can wreak havoc on the insulin resistant, but they are undeniably whole, real foods that don’t require much processing beyond simple heating.

Deciding whether potatoes fit into your diet is ultimately a personal decision, but exactly how your body reacts to starch – in its current metabolic state, which, remember, is not set in stone – should be the major determinant. Other potential, secondary concerns with potato consumption exist, things like glycoalkaloids, macro- and micro-nutrient counts, intestinal permeability, and anecdotal accounts (including my own) of joint irritation, all of which I’ll get into next time, but for now, potatoes reside in dietary limbo.” (read the full article here)

But cavemen didn’t eat potatoes!
Here is the thing that really grinds my gears about the whole Potato argument with respect to whether or not they’re “Paleo.” Most often, I hear the argument against potatoes in the context that “the cavemen didn’t eat potatoes” – the ever-popular “reenactment” argument (which is pretty lame). Potatoes in their modern form were originally cultivated in Peru around 8,000 BC, and then brought to Europe in the late 1500’s. If people were cultivating potatoes earlier than 10,000 years ago, the benchmark for the dawn of agriculture (and thus, the Neolithic Era) would be different too. If anything, I’d say it’s quite compelling that potatoes were one of the earliest cultivated crops, suggesting they were probably a food source before organized agriculture – and one that early Peruvians felt were worth the effort of trying to cultivate. If you’re all riled up at this point about whether or not potatoes are a Neolithic food, head over to Free The Animal and read Richard Nikoley’s response to this very same issue – we like what he has to say. According to some of the articles I consulted in writing this post, the hypothesis that potatoes (ie. tubers) were consumed prior to the Neolithic Era is possibly true. To quote Mark Sisson again:

Instead of trying to go down the decision-making paths of “WWCD” (What Would Cavemen Do?) we prefer a more intuitive approach to eating “Paleo.” Some people call it Primal, some people call it Archevore, and some people just call it eating clean. Whatever name you give it, the worst thing you can do is try to cram it into a neat little box with hard lined boundaries and food definitions. Eating an ancestral diet is not one-size-fits-all. (As Liz Wolfe, who edited this post, pointed out to us – this is probably why we, as a community, have gravitated towards the “ancestral” term.) There are important personal nuances to digestion and nutrition that make n=1 a very important exploration (in other words, it is best to find out what works for you on a personal level.)


Important things to consider about potatoes:

Should you be eating Potatoes? (TLDR)
If you’ve glossed over the last +/- 2000 words, lets summarize: we more or less have the digestive mechanisms to adequately consume and digest potatoes without detriment. That said, we need to be mindful of our selection, our preparation, and our habits in consuming potatoes. We want to buy organic potatoes that have no evident damage or green spots, peel them, and cook them.  Potatoes are primarily starch – which breaks down into glucose, so we also need to be mindful of the frequency with which we consume them (ie, if you’re trying to lean out, avoid them).
If you’re with us on all that, here’s our last bit of advice: Try them out for a couple meals a week, and take note of how you feel after consuming them. Do you feel better or worse? Because of their high Glycemic Load, they will likely raise your blood sugar for a while after eating. If they “agree” with you, great – bring them back in moderation. They do break down to glucose, after all, but you also derive vitamin C, potassium, vitamin B6 and magnesium from them.
On a final note, we aren’t trying to provide the “final answer” on whether potatoes are “Paleo”or not; that part is up to you. (Mark Sisson ends his post on potatoes with that line as well, and we agree.) If you’re still on the fence about them, but are a “Paleo cheat” type of person, consider this: Next time you plan on having a “cheat day,” skip the german chocolate coconut flour cake and instead have some oven-roasted potatoes. Yes, two of the people who are known in the “Paleo” world for their “treats” just told you to try potatoes as your “cheat meal.” There are many worse dietary indiscretions in this world… (Food for thought).
So are potatoes Paleo?
You tell us. We’d love to hear your thoughts in the comments below. Please keep comments constructive – Thanks!
. . . . . . . . . . . .

And now, a side-dish recipe using potatoes! This recipe is adapted from a Rachel Ray recipe (I know what you’re thinking right now: “yuck”) that I made pretty regularly in my post-college years. The original recipe is quartered potatoes, oven roasted with a brown mustard and white wine dressing with cranberries. I used to make that bad boy on my grill’s skillet, and it was mighty tasty. For our take on this recipe, we adjusted the dressing to our liking and made some embellishments. We also brought the cooking for this one back into the kitchen so that no one has to fuss with a grill in the winter months.
An option for this recipe would be to use turnips in place of potatoes. 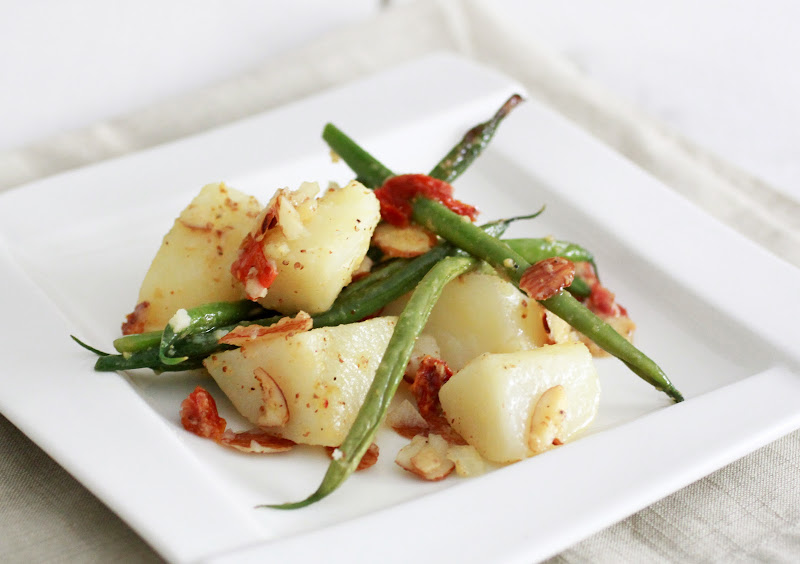