Primal Beach Weekend (Pt. 3): The WOD-build a massive sandcastle for time, a recipe for a fun workout.

But First- A Background Check…

Bill and I met on the set of a music video. I was there doing makeup for the lead singer, and Bill was the drummer. When we were first introduced, we chatted a bit about drumming (I LOVE the drums and secretly wish I was a drummer…I think he got a kick out of this), but about 7 hours into shooting is when we really started to hit it off. I was chatting with Bill, the bass guitar player Troy, and Anthony the lead singer while I was touching up his makeup. I don’t remember how it came up, but I mentioned being really sore from deadlifting at CrossFit the day before. Bill’s reaction was priceless…”you deadlift????” I think his jaw hit the floor as soon as the words rolled off my tongue. I giggled at this a bit. To make him sweat a little more, I went into more detail about some other things I did at CrossFit. I got the hint that he was into fitness, and clearly he was impressed that I worked out at the level that I do. Plus, I thought he was really cute so I will admit I milked it a little.

After the shooting wrapped, I snuck behind Bill’s drums and jokingly acted like I was going to play. Anthony tried to get me behind the drums during the whole shoot, and I avoided it the entire day in fear of getting on the behind the scenes camera. Once I sat down, Bill came over to me. He asked if the seat was the right height for me, and tried to give me a few tips. Unfortunately there is no hope for me in music department, so I just kind of banged a few drums and called it a night. As I was sitting there, we chatted a bit more. We found out that we both have a love for art, and we both paint watercolor. Bill is a landscape architect, and I have painted/drawn ever since I can remember, which I believe plays a huge role in my skills as a makeup artist. When he found out I could paint, he had almost the same reaction that he did to the deadlifting comment. Then he asked me if I was seeing someone. I immediately said “NO”. I was really flattered by the way he had been reacting to the things that we had in common, and this made me even more interested in getting to know him better. As I was making my rounds saying goodbye, Bill handed me his business card. “Facebook me, I guess that’s how kids do it these days?” When I got home at 12 am, that was the first thing I did.

Bill and I didn’t start dating for about a month or so after we met on set. We chatted back and forth for a while, talking about fitness and diet and personal artwork. Each conversation was better than the last, and it was a clear preview into how things would be as a couple. So why the insight into our relationship? That information is the foundation for the things that we most love to do together (cooking and eating, exercise and just being active together in general). There is much more to it, but for the sake of sounding too cheesy, I’ll leave it at that.

On to the WOD!

Our last day at the beach was an epic one…to say the least. We had joked about building a sandcastle the entire weekend, and we decided on the last day to really make it happen. We got an early start with our beach morning routine of La Prima organic coffee (Bill had the amazing idea to put about half a teaspoon of coconut oil in his coffee. It’s unreal, and now I don’t take my coffee any other way), and our primal veggie scramble. After breakfast, it was time for suits, sunscreen, and a sandcastle. Bill grabbed all the gear, and we were off to the beach. We started out shovel in hand, digging a huge pit. I wasn’t sure where we were going with this pit, but I figured Bill had the design idea all mapped out in his head, being that he’s a landscape architect and all (little did I know, I was wrong). About 20 minutes later, we stood there hot and sweaty staring at a huge pit about 2 ft deep with about a 5’x4’ footprint. 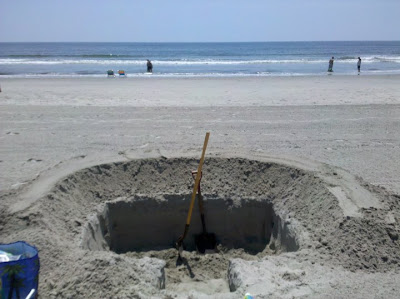 “Okay now what”- first words out of my mouth. Bill replied with, “Now we build the sandcastle”. This confused me because all I saw was a huge pit. “Okay…but what is the pit for? Don’t you usually have a moat around a castle? Not a castle around a moat?” Bill just stood there staring…”oh”. “It’s okay, we can build a sand community…let’s do this.” –I giggled a bit, and then we went to it. So what happens when two very fit artists go to the beach? They build a killer sandcastle (in 2 hours, 25 minutes – not that we kept track – Bill), and leave with wicked sunburn (please, make sure to reapply!). We got lot’s of “oohs and aaahs” from people in passing during our building process, and as soon as we put our buckets down a group of small children appeared out of thin air to trample all over our hard work. 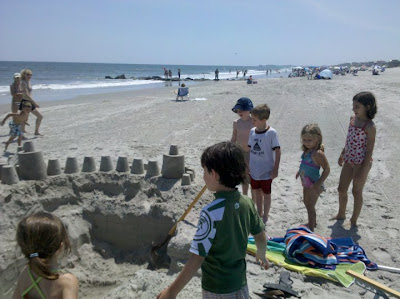 Luckily we got a picture before any damage could have been done (none was, thank goodness). 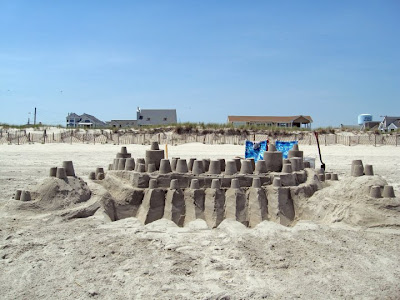 So how might you ask, does us sharing about our adventures in sandcastle building benefit you at all? Well, besides having a somewhat amusing story to read, this is a prime example of living “primally”. Bill and I are in our mid 20’s, and we spent our last day at the beach moving tons of sand and playing together after fueling our body with protein, healthy fat, and fresh veggies. We had the energy and strength to accomplish this project, because we fed our bodies properly first. Most kids our age would have woken up at noon (probably skipped breakfast), walked down to the beach with some snacks (probably something salty, greasy, and processed) cracked a beer, and sat in the sun.

When we got in from the beach, we showered off. Packed up, and threw together a huge salad with left over food from the fridge, and had some tuna steak and scallops from the night before as a quick primal dinner before we hit the road to come home. This meal took about 10 minutes max to throw together. The result of this was that we cleaned out the entire fridge of food that would other wise have been wasted, and we were properly nourished for the 6 hour drive home. No greasy drive through for us! We made a quick stop for coffee and fruit, and hit the road. The best part about this experience in my opinion, and I know Bill will agree, is that it all was EFFORTLESS. Everything came with ease. Being healthy is not hard. It’s fun, and rewarding. Healthy travel success, easy as pie (a fresh fruit with raw honey in an almond flour crust pie of course). Just some food for thought. Think you can do it?