Hi folks – and welcome to the all new Primal Palate!

We’ve been hard at work over the last year to completely redesign and upgrade Primal Palate. If you’re completely new to our site, you’ll find out that cooking great food and sharing it with people is our passion, and we love hearing about how food has changed peoples’ lives for the better. When we set out to work on the latest version of Primal Palate, we knew we wanted to help better connect people to good food and great recipes. We wanted to make Paleo cooking and meal planning easy and accessible to everyone. We wanted to help bring people together and allow them share their recipes with one another.

With the all new Primal Palate, it’s not just about us…. it’s also about YOU. Today, we are introducing user-uploaded recipes! We invite you all to share as many recipes as you’d like. The more, the merrier! Once uploaded and approved, you’ll be able to see your recipes on the site, use them for meal planning, and also see them on our smartphone app “myKitchen.”

It’s exciting for us to see how far things have come since our early days, and we can’t wait to see the new recipes you all will share on Primal Palate. We sincerely hope you enjoy the new website! It is our great pleasure to continue to do what we love, share it with you all, and see all the new dishes come to life. Feel free to send us an email anytime with suggestions, comments, or any feedback you may have. Thanks for stopping by, and thanks for sharing your passion with us!

Don’t ask me why I decided to make brownies this week. I really don’t know. Maybe it was the jet lag from our whirlwind book tour with Diane Sanfilippo on the west coast. I mean, I really shouldn’t have made brownies after getting back from a week of “travel food” which is never as clean and healthy as “at home food.”  For some reason, a sweet woman that attended our signing in San Diego popped into my head. She told me that our Almond Fudge Brownies from Make it Paleo were her FAVORITE brownies ever. I was honored, and slightly embarrassed, and tried to hold back saying “Umm…for real? Ugh I could make those so much better now.” So I did… At 8 pm on Saturday night.

Our book tour was pretty crazy for us. That was the first time we had ever done anything like that, and we knew it would be hard, but nothing could really prepare us for that trip. It was exhausting, stressful, amazing, and exciting. I would say that I had to pinch myself at each signing, to realize that all of those people were there to see us and Diane. I think I just had myself convinced at each event that we were just there hanging out with all those people I had never met before. I kept telling people I felt like we were on the run from the cops, because we were in a different city almost every day. It was wild. 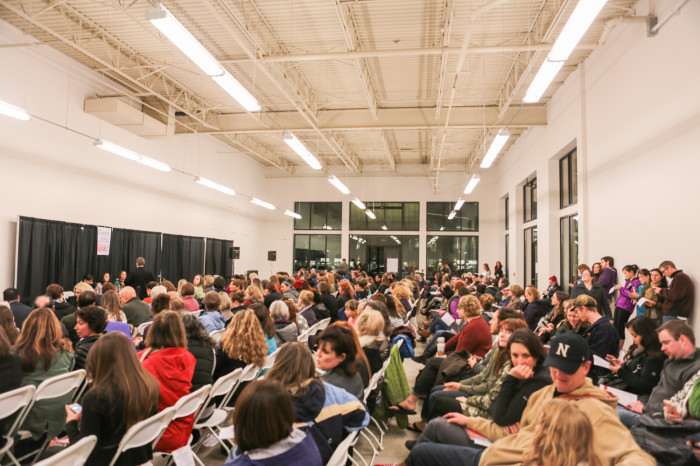 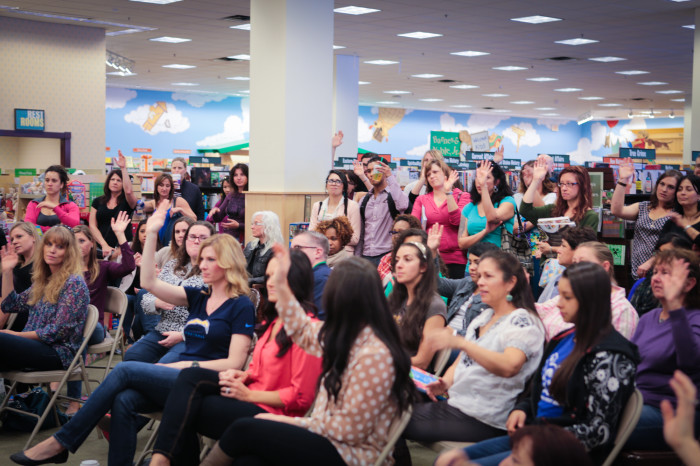 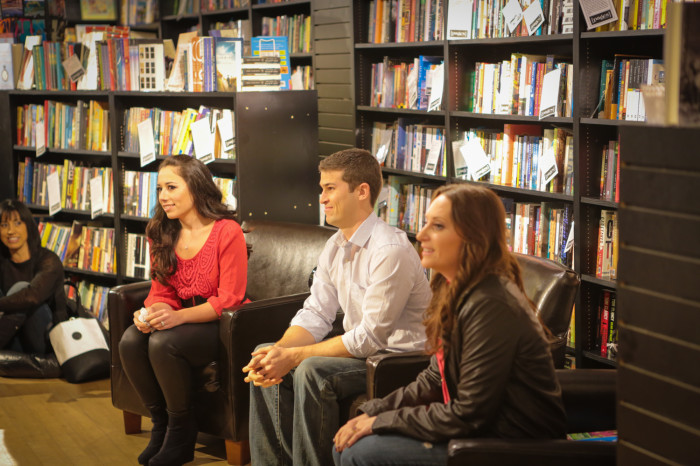 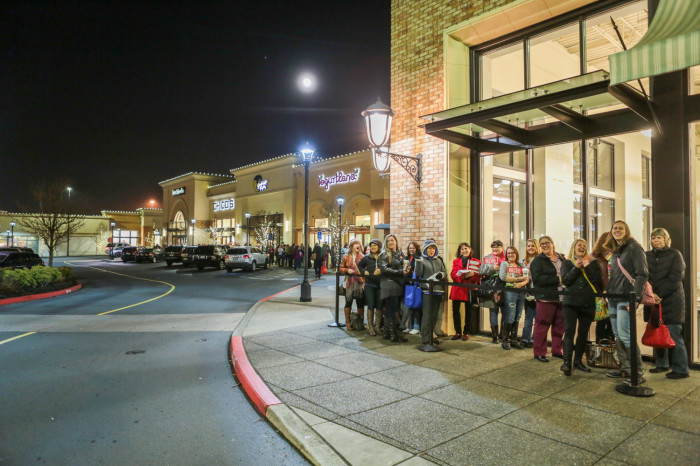 Portland showed up in unprecedented numbers! Thanks guys! 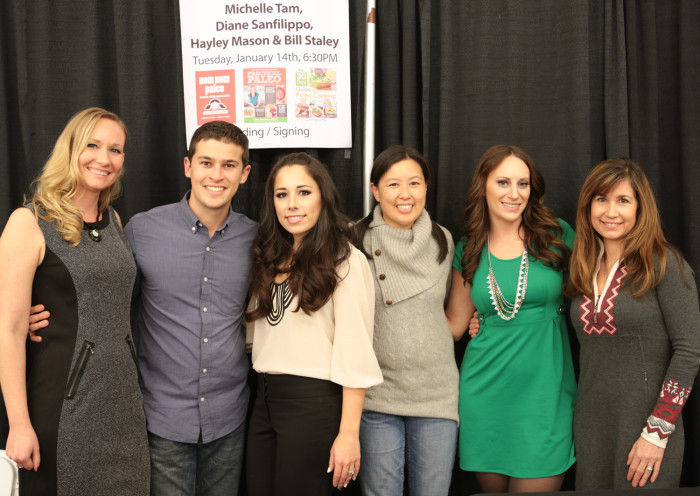 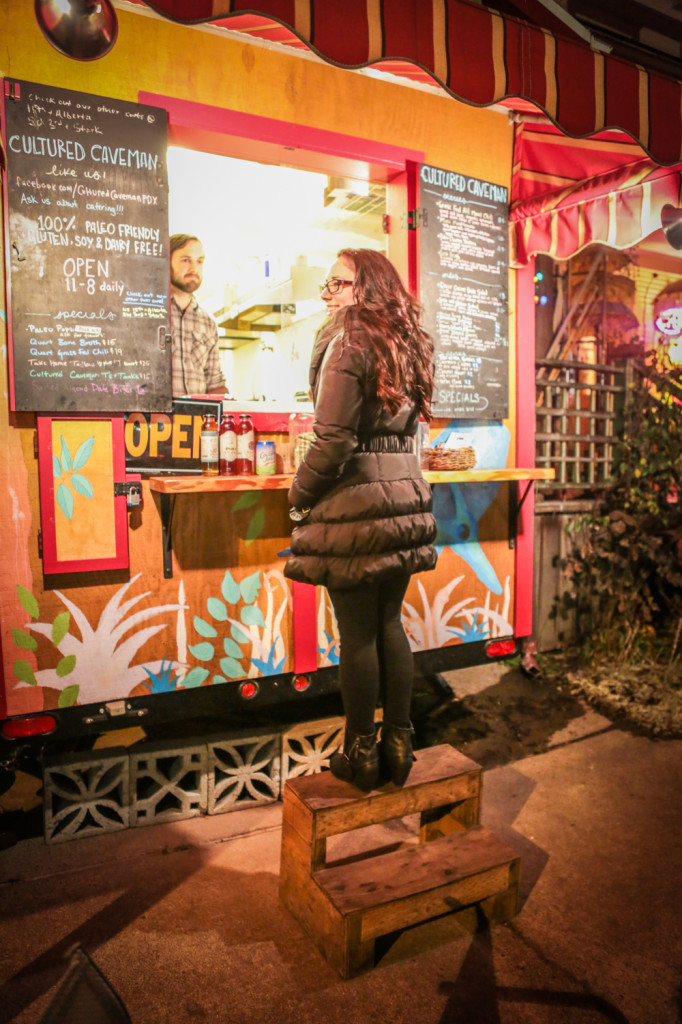 We loved visiting the Cultured Caveman food cart in Portland. It’s a must-see (there are 3 in total). 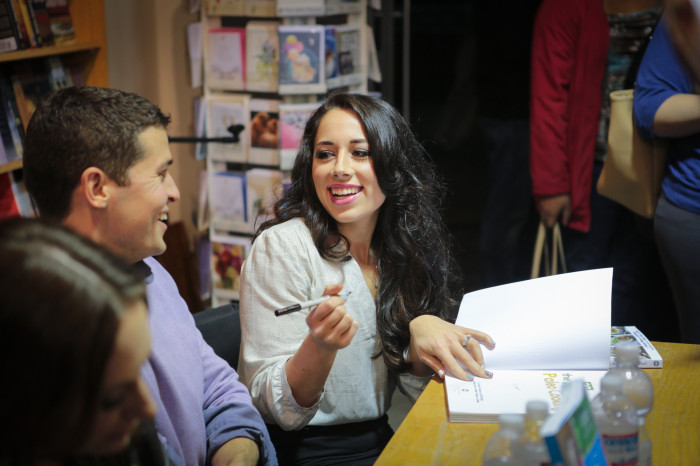 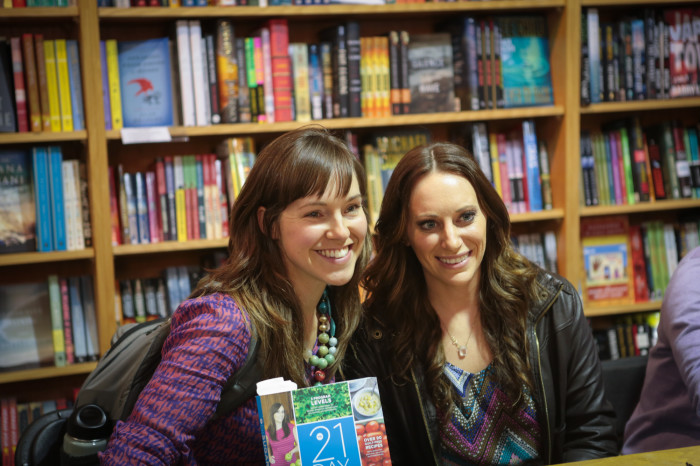 I whined to Bill that I wanted to go home from sleep deprivation through some parts of California until we got to San Diego, and Kyle Maynard came to our signing. I had no idea who Kyle was, except that he did tons of motivational speeches all of the time. Then I found out that he was born with a condition called congenital amputation, and yet he doesn’t let it stop him from doing anything, including climbing Mt. Kilimanjaro BY HIMSELF. I could probably never do that, with all of my arms and legs. I felt like a huge jerk for complaining about anything on that trip after meeting him. 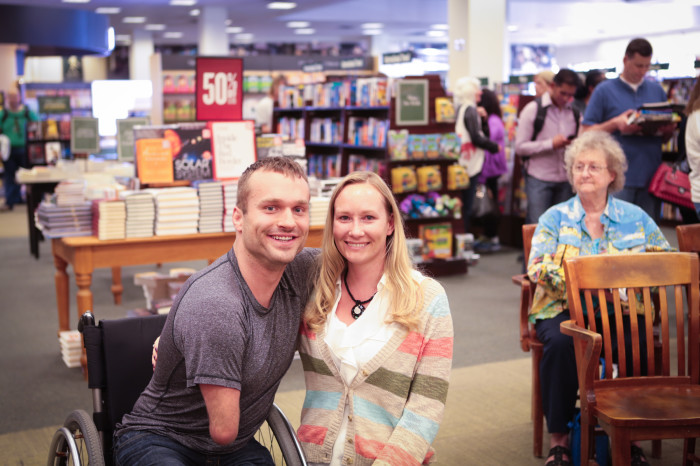 It’s all relative, and what is difficult for one person shouldn’t be discounted because they haven’t done something as challenging as another person, but it at least gave me some perspective. Don’t get me wrong, I felt VERY VERY grateful during the entire trip, and was very aware of how lucky I was to be doing what we were doing, but it was a pretty emotional trip combined with the lack of sleep. It got to me, but I was still very grateful.

When we got home from our trip, I texted Diane and told her that the whole trip felt like our wedding. It was exhausting to get through, but after it was over I wanted to do it all again. Bill and I are so incredibly grateful that so many people support us and what we are doing. I know we publish cookbooks and have this website to help people eat better, but all of you came out of your way to support US, and to meet US. It was unbelievable! My favorite part of each signing was getting to talk one-on-one to each person who came up to get their books signed. That’s always been my favorite part about book signings. I love meeting new people, and hearing their stories, because usually I feel they are more inspiring than my own. Talking to the people who buy our books always feels like I’ve known each person their entire lives. They have a piece of our heart and soul in their kitchen, and we get to meet them and talk to them. Words really can’t express the thoughts and feelings that came with that trip, because they were overwhelming… In a good way. 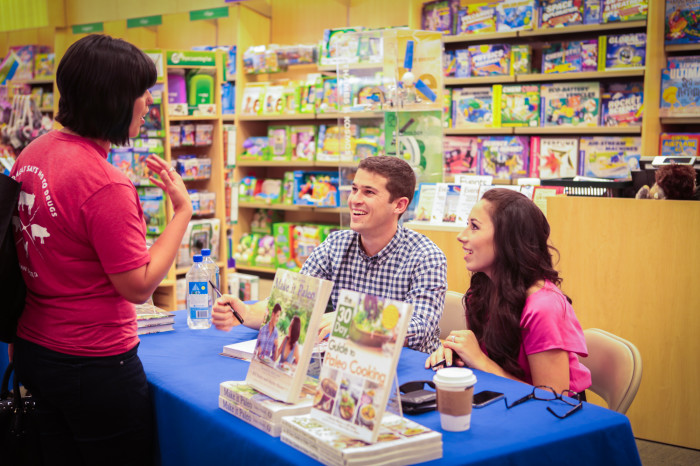 Okay, back to the brownies. I’ve been wanting to make a new brownie recipe for a while now, and when I realized I had all of the ingredients the other night, I just went for it. I used Eating Evolved baking chocolate, which Bill told me later on was the 72%, not the 100%. Somewhere along the line we lost the packaging for that, so it was in a ziploc bag. I still needed to use 3/4 of a cup of coconut sugar, and the brownies still weren’t overly sweet. I also did use butter in this recipe, but I think you could use palm shortening for a completely dairy-free version and it would turn out fine. When I detox from eating so many brownies I’ll give it a shot and let you know how it turned out. I also used chestnut flour in this recipe, because a little birdie told me that chestnut flour makes things really fluffy, and I didn’t think the flavor would affect the brownies in a bad way, but you could definitely use blanched almond flour if you don’t have (or can’t get, or don’t want) chestnut flour. I do recommend getting some chestnut flour for your grain-free pantry though. 😉 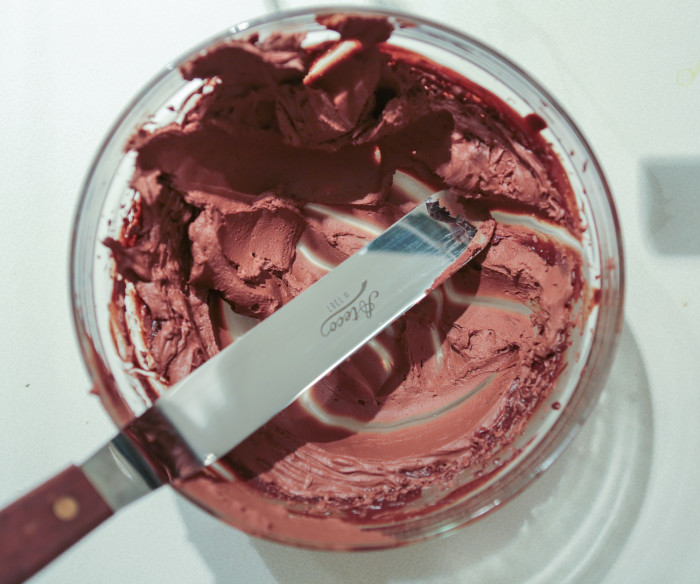 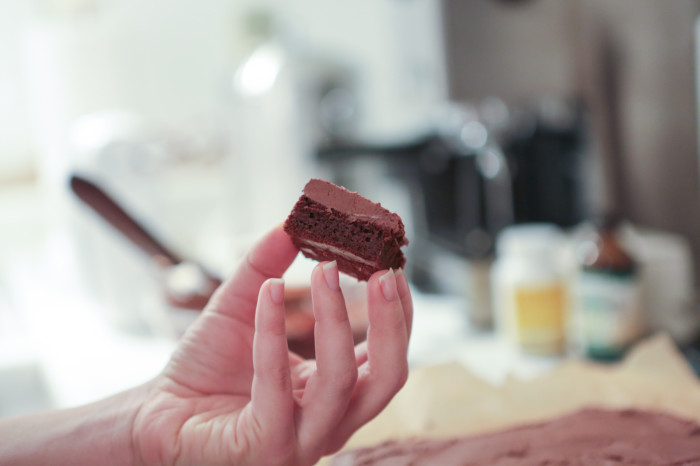 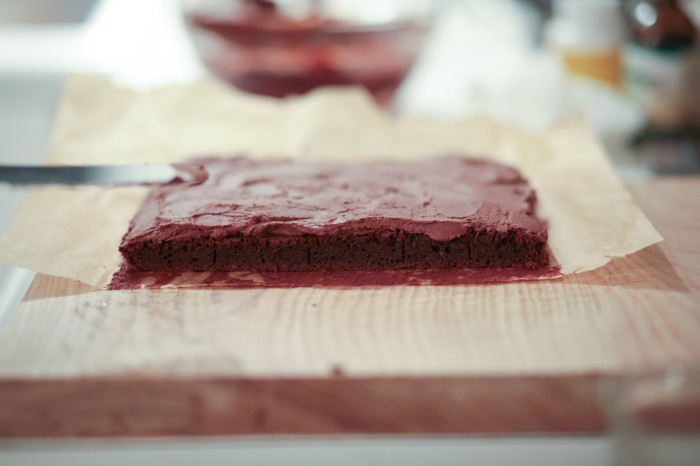 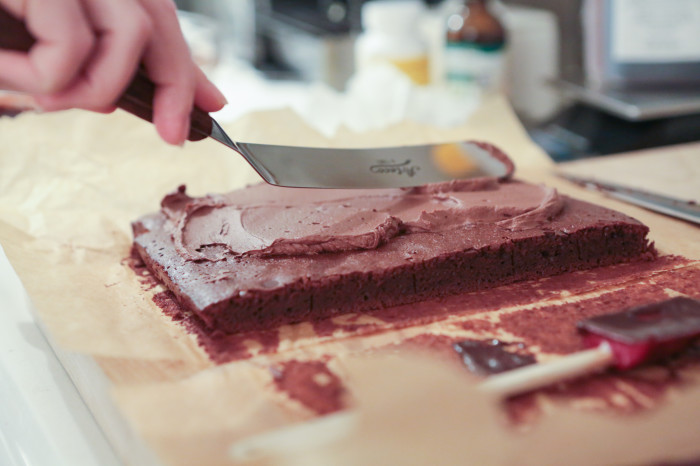 These brownies were AMAZING! They were the real deal, and I couldn’t believe it. They were fluffy, fudgy, and not dry at all. I sprinkled enjoy life chocolate chips over half of the batch of brownies, because I wanted to try a new dairy free chocolate frosting recipe for the other half, and I thought frosting brownies that had chocolate chips sprinkled on top, would have been overkill… haha! For the frosting I used Kara brand coconut cream (recommended by a follower of ours on Facebook), enjoy life chocolate chips, and a bit of vanilla extract. I scalded the cream, and poured it over the chocolate chips. Added the vanilla, and stirred it until smooth. Once it was smooth I chilled it in the fridge, and once it was completely cold I whipped it with a hand mixer until it was fluffy. It worked GREAT!

I highly recommend this brownie recipe if you really want to trick someone that they are eating real brownies. Unless they are allergic to nuts. Then don’t do that. 🙂 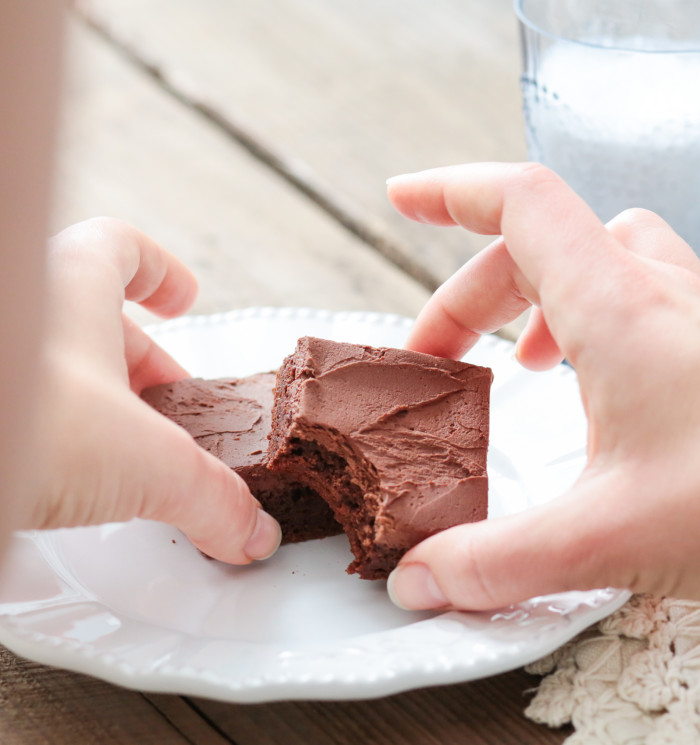 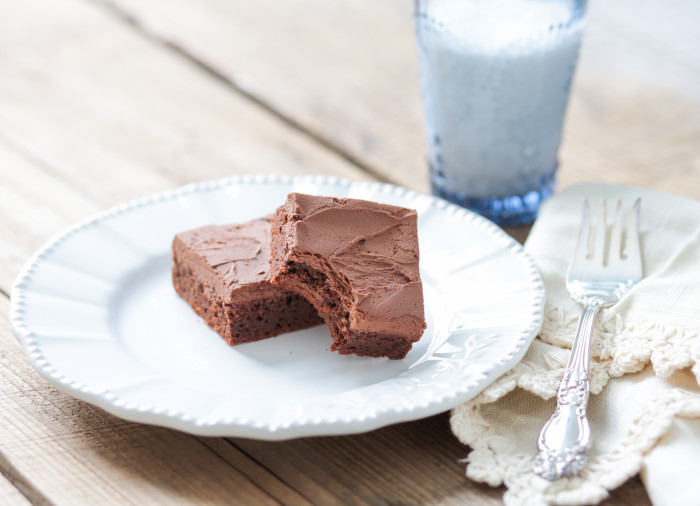 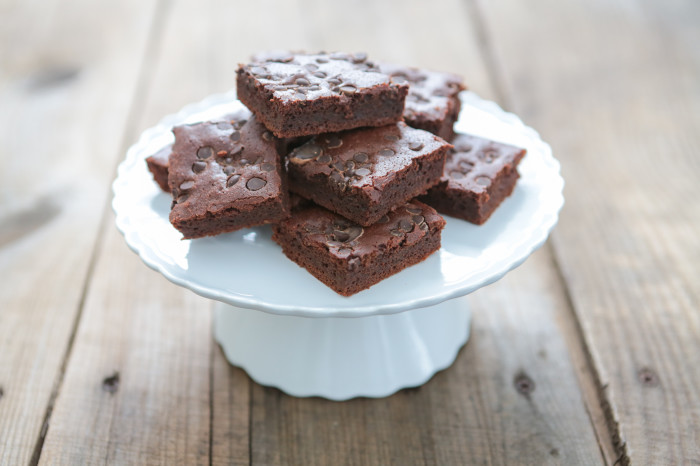 These brownies are the perfect combination of soft, chocolatey, and satisfyingly rich. You'll never believe they are grain-free!

This creamy dairy-free frosting is the perfect complement to our fudgy brownies. It is soft, spreadable, and utterly delicious!

The Kara brand coconut cream comes in a 17 oz box. We used half the amount of cream for this recipe which is the perfect amount to frost our brownie recipe. You can use the whole box of coconut cream, and double (might need slightly more or less) the chocolate chips if you are making a two layer cake. If you can't get Kara brand coconut cream, you can also use the cream on top of chilled, canned full fat coconut milk.